Sleeping pods can be a problem for folks with claustrophobia but for more adventurous folks, it’s a fun experience.

Cheap and cheerful capsule hotels are forever expanding from their Japanese cradle, including now in Milan, Italy where the tiny, stacked rooms are helping the city cope with exploding tourist numbers.

With no-fuss convenience for both the city and transport links, digital connectivity and a social side among their chief selling points, the capsule hotels target the Generation Y crowd.

Some people, though, just stay out of sheer curiosity.

Croatian tourist Dragan Kupresanin, 31, said he wanted to try the room because “it looked like something new, futuristic style... those kind of boxes that you sleep in”.

After sleeping like a log at Ostelzzz, down a quiet street in the centre of Italy’s economic capital, he’s ready for more.

“I really liked it. This kind of hotel should be developed, many people avoid youth hostels because of the privacy problem (with bunk beds etc) but here you have it, ” he said.

In the size of one standard hotel room, eight capsules – each measuring 1.45m by 1.45m by 2m – are stacked on top of each other, four above and four below, with an enclosed toilet space in the room and showers down the corridor.

Inside the capsule is a mattress with duvet and pillow, two charging plugs for mobile phone or laptop, a lockable cupboard for luggage and a bedside table. 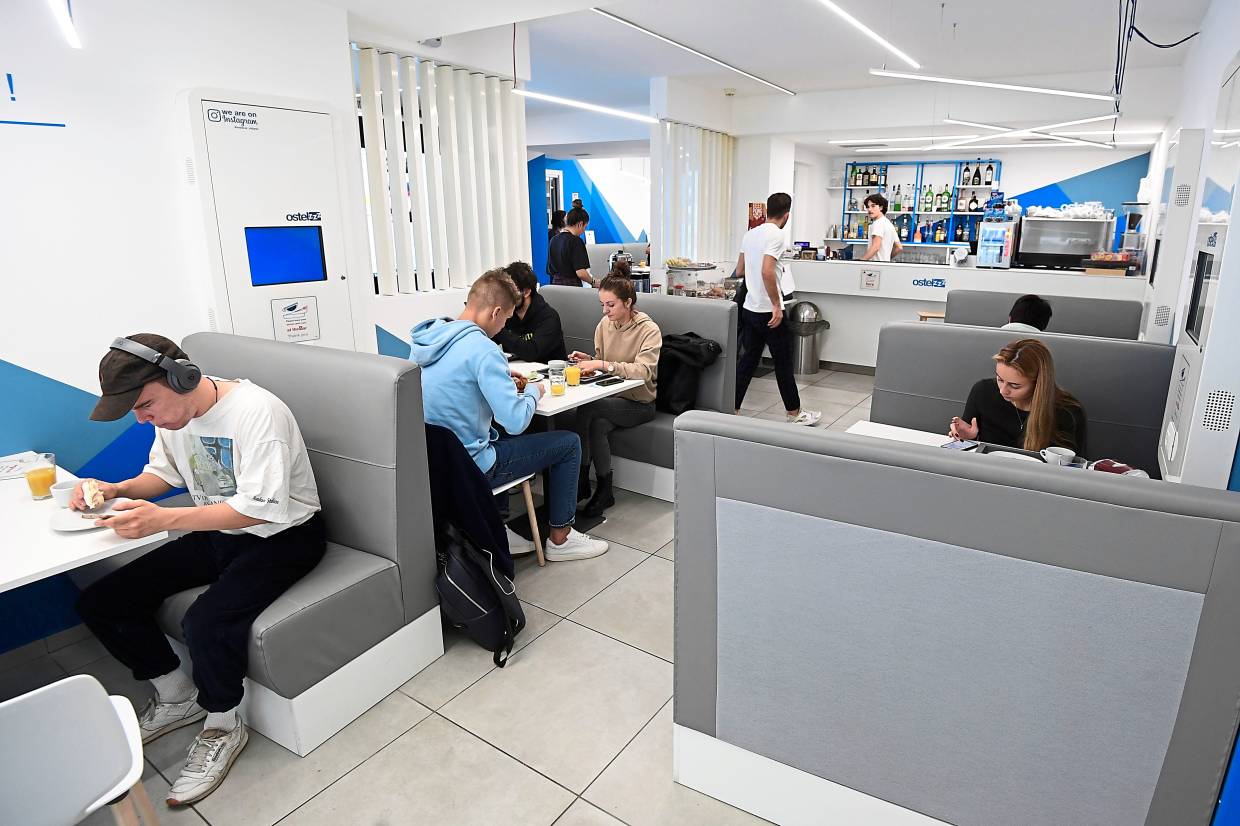 Guests hanging out at the dining area of Ostelzzz, a capsule hotel in Milan, Italy. — Photos: AFP

The tiny rooms took off thanks to commuters who had drunk too much or just missed the last train home.

Since then, the concept has taken off around the world, first in airports, from Paris to Moscow and Bangkok, and then in cities like Singapore, Seoul or Mumbai.

Nevertheless, in Europe, capsule hotels are rare outside of airports.

There is for example the City Hub in Amsterdam, the Netherlands and the Lucerne capsule hotel which opened in Switzerland at the end of 2018.

Milan is the first Italian city to have a capsule hotel, but the company behind it, ZZZleepandGo, is expanding.

Capsule hotels will be open at six airports, including Milan, Warsaw (Poland), Vienna (Austria) and Brazil, making it the biggest such company in the world, says chief executive officer Gianmaria Leto.

On top of adding five or six airports a year, “our objective is to create one or two (capsule) hotels a year over the next five years in main European cities, ” said Leto, 32. With the ambitious expansion plan, the Italian company said it expects its annual turnover to grow to US$11mil (RM45mil) in five years, compared to one million in 2019.

Sabatini says that “the only negative aspect of a capsule hotel is the feeling of being closed in, of claustrophobia, that some people get.”

Otherwise, it’s a win-win-win: “privacy, low cost, and all within reach of the city, ” said the writer of the I’ll B Right Back blog.

“Small spaces aren’t a problem for young people, ” she said. “What they want is technology, like automated check-in, sockets to charge their electronics, ” but also communal areas to meet new people, she added.

Milan has seen a tourist boom since the city’s Expo 2015, thanks to its fashion and design weeks, as well as its Duomo (cathedral), museums and vibrant nightlife.

The hotel, which can also be booked via Airbnb, attracts a varied clientele, and not just visitors to the city. Some 25% are workers or students like Monica Vici, 22, who lives at the Ostelzzz capsule hotel pending finding an apartment.

After or before her classes, she sits at her laptop in the sleek, stylised communal area, while, nearby, people come and go to the hotel’s 24-hour bar.

“You have privacy in the bedroom, but there’s also a kitchen, you meet lots of people, ” she said.

The staff, all under 40, are “very attentive”, said the Rome native.

Not all guests fall into the millennial category. The hotel had an 86-year-old guest, and boasts a family room with four inter-connected capsules.

“I like it here because of the friendly environment. It’s like being at home, ” she said. – AFP