The Black Thorn trees on Leow's farm are decades-old, which is why they generate rich, creamy fruits. Photo: Pow Chiok

The recent second edition of the Bangi Golf Resort World Durian Championship: Malaysia Edition saw more than 50 durians fighting it out for the top spots in categories like Musang King, Black Thorn, registered clone and D24.

Although there were some repeat winners – Eric Chan's Dulai Fruits once again nabbed the prize for best Musang King and Tekka, there were also some new faces. (Go here for last year's winners: 2018's Top 5 Durians In Malaysia And Where To Find Them).

Here are the two new winners of the best D24 and Black Thorn in Malaysia in 2019.

Leow Cheok Kiang is a name that is likely to ring a bell in durian circles, where he is a venerated figure.

Leow is a 60-something Penang farmer who has three farms in Seberang Perai. He is also the person responsible for registering the vaunted (and now very expensive) Black Thorn clone in Malaysia.

Leow has won numerous competitions in Penang for his Black Thorn. This is his first time entering a KL competition. Photo: Pow Chiok

“Mr Leow started farming with his father when he was seven, so he has a well-established routine of taking care of his trees. If the tree is healthy, he knows that the fruit will be of good quality. So this is the fundamental idea that he follows to this day,” says Pow Chiok, Leow’s good friend and spokesperson.

Pow was instrumental in getting Leow to participate in the competition and even went to the extent of collecting fruits from Leow’s farm (and a few other Penang farms) and driving down to Bangi on the day of the competition to deliver them to the organisers.

“This is the first time he is participating in this competition and Penang people are very proud of him because it just proves that his Black Thorn is one of the top, premium grade durians in Malaysia right now,” says a jubilant Pow.

Leow first discovered Black Thorn at a friend’s farm and took cuttings from the tree. His oldest Black Thorn durian tree is now over 50 years old and was originally a kampung durian tree which he grafted 35 years ago with the Black Thorn clone; this is also the tree that has yielded award-winning fruit.

Also read: ‘Durian Whisky’ Is Malaysian-Made And Not Actually Whisky

Leow first discovered Black Thorn at a friend’s farm and took cuttings from the tree.

Although Leow’s Black Thorn has collected accolades aplenty, he doesn’t export his fruit overseas; instead every year during durian season, he sells his fruit at a fruit stall in Sungai Jawi, Penang.

“His fruit stall is actually a preferred destination – every day tourists in Penang will flock to his stall.

“And he keeps his prices consistent, about RM60 to RM65 per kg throughout the season – he never raises prices even though others may be selling it for a higher price.

“And even though he only produces fruit for domestic consumption – his fruits get bought up every day and he often doesn’t have enough,” says Pow.

Where to taste the durian (until end of July):

The Black Thorn trees on Leow's farm are decades-old, which is why they generate rich, creamy fruits. Photo: Pow Chiok

Leow is responsible for registering the Black Thorn clone in Malaysia. Photo: Filepic

Ocean Chua and his family had long been avid consumers of durian or as he puts it: “My whole family is crazy about durians – my wife, mother and mother-in-law can eat it three times a day from morning to night”.

Chua started the organic durian farm
with his friends so they could produce ‘cleaner’
durians. Photo: Ocean Chua

So one day, he and his friends decided to start their own organic durian farm in a remote part of Bukit Tinggi, Pahang.

The 30-acre farm is surrounded by the verdant greens of the Taman Negara forest reserve and has around 700 durian trees as well as rambutan, papaya, banana and mangosteen trees.

“We are an organic farm, so we make use of our natural environment. Like the fertiliser that we use is a combination of fermented seaweed as well as fallen leaves/grass which are mixed with soil and left to ferment. We treat the earth, not just the tree,” says Chua.

As a result of their careful ministrations, the soil on Chua’s farm now has a pH value of 6.5, so it is almost neutral.

In contrast, most commercial durian farms that use chemical fertilisers have more acidic soil with a pH value of around 4.5 to 5.

The farm also uses pristine water from a waterfall nearby to irrigate the trees on the farm, lending to its wholesome appeal.

Also read: How to choose a durian, according to durian experts

Pictures from the farm show a host of natural inhabitants from ladybirds to worms and bees. It is this natural ecosystem that Chua thinks has contributed to his creamy, rich D24 durians.

Although the durians on Chua’s farm are mostly intended for him and his friends, come durian season, the friends run a durian stall in Metro Pudu and sell their farm’s yield until supply runs out.

Asked about their win, Chua says this is testament to the notion that very good durian fruits can be borne out of organic farming practices.

“This affirmation is our motivation to continue preserving nature and cultivating healthy durians for the next generation. We also hope the award can send a message to other farmers that good durians can be produced without the aid of chemical fertilisers or pesticides,” he says.

Where to taste the durian (until end of August/supply runs out): 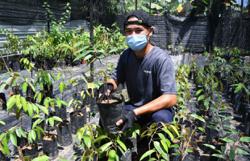