Hop on a psychedelic trip to 'Wonderland' at Singapore's ArtScience Museum

'Wonderland' is an interactive exhibition at Singapore's ArtScience Museum which explores how the timeless stories of Alice and her adventures have been reinvented in contemporary contexts. Photos: The Straits Times/Asia News Network

If you have ever longed to be a part of the Mad Hatter's tea party, you now have a standing invitation at the ArtScience Museum in Singapore.

But there will be no tea or cakes to nibble on.

Instead, guests are seated around a large table set with teacups, teapots and plates and treated to a visual feast of projections that adorn the walls and tableware as music plays in the background.

One moment, projections on the walls transform the room into a forested nook. The next, scenes of the Mad Hatter's tea party from different films through the years are beamed onto the plates.

The four-minute experience is part of Wonderland, an immersive exhibition by the Australian Centre for the Moving Image (ACMI) that celebrates the beloved Lewis Carroll classic and Alice's enduring presence on screen and in pop culture.

The exhibition first opened in Melbourne last April and drew more than 170,000 visitors over a six-month run.

It is now on show at the ArtScience Museum, marking the exhibition's first stop on its global tour. The exhibition runs till Sept 22.

Honor Harger, executive director of the ArtScience Museum, says: "The story of Alice in Wonderland is a story of magic and wonder, and ACMI has also made it a parallel story of the evolution of filmmaking and screen-based technologies.

Museum goers will also be given an interactive map which can be used to unlock interactive experiences at the different galleries.

"That brings together the two poles of our mission to explore art and creativity and to look at innovations within science and engineering."

There are more than 300 artefacts on display at the exhibition, including clips from Alice In Wonderland films released over a century ago, original costumes from NBC's 1966 production of Alice Through The Looking Glass House, and story sketches from Walt Disney Studio's iconic 1951 rendition of the classic tale.

Museum goers will also be given an interactive map which can be used to unlock interactive experiences at the different galleries. For instance, visitors can customise their own card soldiers at The Queen's Croquet Ground by pasting cut-outs to the back of the map, scanning it, and taking a photograph of their face at a booth.

Not only will scanning the map transport the design to a wall-length screen displaying the Queen's croquet ground, but the card soldiers' faces will also be replaced with that of the visitors'.

Such experiences are a chance for ACMI to offer visitors a different way to engage in a museum and exhibition space, says ACMI curator Jessica Bram, 37.

She adds: "One of the most important drivers was creating something immersive and playful that offered visitors a chance to be active and participatory. Wonderland was just the perfect universe to do that." - The Straits Times/Asia News Network

Hop on a psychedelic trip to 'Wonderland' at Singapore's ArtScience Museum 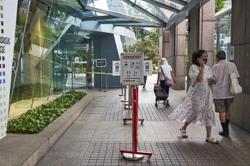