There’s more to Lake Toba than just a volcanic lake Two senior Batak ladies get groovy in their folk song singing as a guest enjoying the impromptu performance at the Lumban Suhi Suhi Toruan village in Tomok.

Travelling is probably the best way to do some soul searching. At least that’s what I did late last year when I was sent to Lake Toba in northern Sumatra, Indonesia for work.

I had been to the place two years ago so hearing the familiar sound of “horas” (a greeting in several Indonesian dialects) and seeing the smiling faces of the locals upon arrival brought back some wonderful memories.

Compared to my last trip, getting to Lake Toba this time around was much easier as we landed at Silangit International Airport with AirAsia, which is not even an hour’s flight away from the KL International Airport 2. From Silangit, my group and I took a van to Parapat (two hours away), where we boarded a ferry to the lake.

Covering an area of over 1,700sq km and a depth of 450m, the world’s largest volcanic lake seems more like an ocean. On the ferry ride, I realised just how breathtaking the view was, and I couldn’t help but feel grateful that I could witness such natural wonders.

The tomb of King Sidabutar, the ancient ruling clan in Tomok on Samosir Island.

There are two jetties offering public ferry rides to and from Samosir Island. One is the Tiga Raja Jetty with ferries that go to Tuktuk, where most of the tourist activities take place. The Ajibata Jetty has car ferries that go to Tomok, another nearby town with tourist attractions. The ferry rides run from early morning to evening and each ride costs about Rp15,000 (RM4).

Samosir Island is the cultural centre of the Batak Toba tribe, one of the six Batak tribes that inhabit the northern and central Sumatra. While the Batak culture has many rituals and traditional practices, each tribe has its own distinctive following, as well as architectural style.

The Batak Toba tribe can be found around Lake Toba and they follow the Christian and Catholic faiths; two other Batak tribes are Muslims.

Horas is the traditional greeting of the Batak Toba community, as well as the Simalungun and Mandailing tribes. Often used to say hello, it can also be used to wish someone good health or to say goodbye. Other useful Batak words are “mau lia teh” (thank you), “mau lia teh gudang” (thank you very much) and “li soy” (cheers).

Two senior Batak ladies get groovy in their folk song singing as a guest enjoying the impromptu performance at the Lumban Suhi Suhi Toruan village in Tomok.

Batak Toba’s rumah adat or traditional houses are among the most distinctive in Indonesia, with roofs that curve upwards like horns, complete with finely decorated wood carvings and multifunction corners inside. The curved roof, which sees the back portion higher than the front, indicates that descendants who live in the building will do well in life.

The gecko symbols that are often seen on traditional Batak buildings and monuments signify the Batak people’s ability to survive anywhere, just like the animal.

You can see all these in Huta Siallagan, an ancient village that showcases the unique culture of the Bataks. Besides seeing the traditional Bolon and Sopo rumah adat, there are also two sets of large stone chairs and table called Batu Persidangan that are believed to be more than 200 years old. One was said to have served as the meeting place, while the other was used for executions.

While most Batak men are often involved in agriculture, a majority of the women specialise in weaving the traditional Batak fabric, ulos. Head to the Lumban Suhi Suhi Toruan village where one can see Batak women either performing folk songs or weaving.

The weather is usually breezy and cool around the island although at times it does get a little warm at mid-day. Many guesthouses around Tuktuk do not have fans or air conditioners.

Remember to take your time exploring the place and relaxing when in Lake Toba. If you’re staying at a lakeside resort, go for a swim in the water. Those who are up for it can even do some cliff diving – just remember to watch out for rocks and shallow surfaces before doing so. Most resorts provide life jackets for guests too, so if you’re not a strong swimmer you may want to use them.

Other water sports such as banana boat riding, jet skiing and fishing are also available. But if water sports is not your thing, you can always just chill by the lakeside. I did exactly that one evening – sitting in a lounge chair, enjoying the sunset and drifting in and out of sleep until somebody woke me up for dinner!

Lake Toba offers spectacular views of both the sunrise and sunset. Head to Huta Ginjang and Huta Tinggi for the best spots. There are many small eateries and cafes nearby, too, and some have set up special areas at the edge of the cliffs for guests to get even better views of the lake.

A variety of food, from Batak to Sundanese, Chinese and Muslim are available around the island. Ikan bakar (grilled fish) is a popular dish, often made using tilapia fish freshly caught from the lake.

The streets of Tuktuk, Tomok, Simanindo, Ambarita and Pangururan on the Samosir Island are lined with many churches, ancient ancestral tombs and monuments. Journey around the island on a rented sepeda or motorcycle (between Rp100,000 and Rp200,000/RM28 and RM58 per day) on your own if you’re feeling adventurous.

A Batak farmer drying corns by the side of a road in Tomok.

Otherwise, guided tours from official tour agents are also an option for visitors. Check with your hotel for rentals and tour services; make sure they are legal operators. English is widely spoken in Lake Toba so you don’t have to worry much about any language barrier.

For tour guide Posman Manurung from Tomok, Lake Toba is unique because it offers “everything, no matter what kind of traveller one is”. For those who have more time to explore, Manurung recommends getting a round trip package that includes Medan and also the Berastagi highlands, which is about 70km from Medan.

“One can fly in from Silangit and leave from Medan, or vice versa. This way, travellers are able to discover more about the caldera lake, the people, their life and culture,” said Manurung, 58, who has over 20 years’ experience hosting guided tours for tourists.

Mount Sinabung is an active volcano in Lake Toba.

With an elevation of 1,220m Berastagi is known for its cool weather and myriad of fresh vegetables, fruits and flowers.

“There are two active volcanoes near Berastagi where visitors can climb up to see the craters. Mount Sibayak is the closest to town at 2,100m high and is quite easy to climb. It is also a great place to see the sunrise. Another one is Mount Sinabung at 2,400m. It is rather steep and difficult to climb,” he said.

You can also trek up Mount Gundaling, a relatively easy hill where one can see both Mount Sibayak and Mount Sinabung from a distance on a clear day.

“The Sipiso-piso waterfall at the northern tip of Lake Toba is amazing. It is the tallest in Indonesia at 120m. Visitors usually trek down to the bottom of the waterfall and let the water fall on them to get an absolutely refreshing experience,” Manurung shared.

If you’re planning to visit Lake Toba, the best months to visit are between May and September. The rainy seasons are in April, May, November and December.

Lake Toba is one of the “10 new Balis” or new destinations being promoted by the Indonesian government, in the hopes of replicating the economic effects of tourism in Bali.

As part of its commitment to support the government in developing these destinations, AirAsia began providing air connectivity from Malaysia to Lake Toba in October last year, operating four flights weekly to Silangit.

Flight AK411 flies from Kuala Lumpur to Silangit every Monday, Wednesday, Friday and Sunday at 10.40am while flight AK412 flies from Silangit to KL on the same days at 11.25am.

There are also local and international fly-through cities where visitors can connect their flights and check-in baggage to Silangit without the hassle of immigration clearance during the transit in KL.

Other cities are New Delhi, Hyderabad and Chennai in India; Melbourne and Sydney in Australia; Taipei and Singapore.

To make things even more attractive, AirAsia has also included Lake Toba in its “1.9 million promo seats” campaign for the new year.

Flights to Silangit from KL are now going for RM36* (one-way, all-in fare inclusive of taxes and fees for AirAsia BIG members). You can book your tickets on airasia.com or via the AirAsia mobile app from now until Jan 20 for immediate travel through to July 31, 2019.

Meanwhile, AirAsia BIG Members can redeem promotional seats for as low as 920 BIG Points on airasiabig.com or via the BIG Loyalty mobile app.

There’s more to Lake Toba than just a volcanic lake 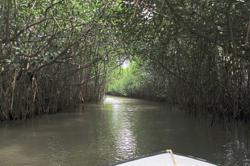