By DAVID TAN and WINNIE YEOH
Penang Island did not face the problem of congestion back in the 1980s. – Filepics

The ‘good’ problem of a city’s growth brings with it the inevitable – increasing density and traffic congestion – an urgent issue that must be addressed.

IN all senses of the word, Penang Island is on the verge of an exciting, yet challenging, era.

The robust trends seen in critical indicators such as population growth, tourist arrivals and Foreign Direct Investments (FDI) – deemed crucial for the state’s prosperity – have, at the same time, tiggered mounting pressure for a more efficient and sustainable public transport system.

Faced with the prospect of an incoming supply of some 64,482 units of residential properties, according to a National Information Property Centre (Napic) report published last year, and a projected population density increase to 2,589 people per sqkm by the year 2020, according to the Department of Statistics, the big question remains: Can Penang Island’s already clogged-up roads cope with the demands that come with having more people and houses on the island?

“It’s a good thing for Penang to grow, but it would be quite a painful challenge if the growth in population and dwellings are not in tandem with the supportive infrastructure,” answered an economic analyst with a bank-backed research arm.

Adding to the “good” problem, it is not only Penang residents who are contributing to its busy streets; local and international visitors also are flocking to the island in hordes, to experience its rich multi-cultural heritage, a culmination of almost 500 years of European colonialism.

Compounding its traffic woes further is its bustling manufacturing and services sector, which captured one of the highest FDI rates in the country from 2010 till last August, registering RM19.7bil, or nearly 20% of Malaysia’s total FDI in manufacturing.

How do these mega cities manage their traffic demands with such success?

“The answer is quite simple, really. If you’ve been to these places, you would notice how easy it is to go from one place to another. Everything is well planned out, and you just hop on and hop off from the station – mostly MRT stations,” the analyst said. 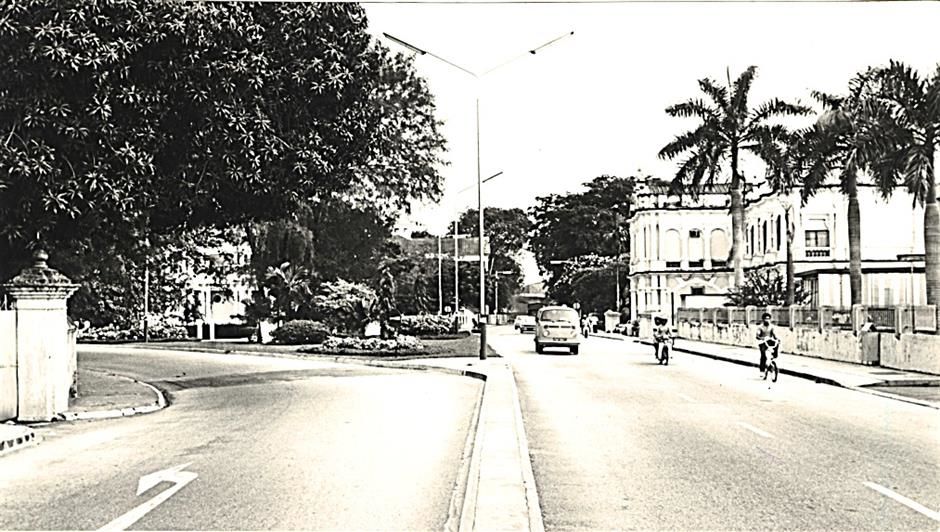 Penang Island did not face the problem of congestion back in the 1980s. – Filepics

So, can Penang emulate Singapore or Hong Kong? The answer is, possibly yes. Penang seems to have the makings of a metropolis like Singapore and Hong Kong, except that it lacks the single most important element – a comprehensive public transport system.

A reflection of the scale of Penang Island’s housing boom, the Napic report states, the new housing estates coming up on the island include the Seri Tanjung Pinang (STP) second phase development, which involves reclaiming 307ha (760 acres) of land at Tanjung Tokong. Its second phase, with some RM25bil worth of residential and commercial projects, would take about 20 years to complete.

Other prominent local developers such as Ideal Property Group will also launch some 12,132 units of high-rise properties in Bayan Lepas, Sungai Ara, Bayan Baru and Bukit Gambier, and another 2,056 units in Tanjung Tokong and Batu Ferringhi. These projects are expected to attract at least 20,000 more residents to the new neighbourhoods upon completion in the next six years.

Ideal Group executive chairman Datuk Alex Ooi said, “With the new housing projects coming in, it is essential for the state government to plan new sustainable public transportation to ease congestion in high traffic volume areas of the island.”

Ideal Group is currently building some 3,108 units of high-rise properties – in Sungai Ara, Bayan Lepas and George Town – which are expected to be ready in the next couple of years.

These mushrooming developments are expected to raise concerns on the urgency to manage the projected increase in vehicles, on top of the existing peak-hour traffic conditions. Napic director Datuk Phuah Tick Lai foresees that the issue will soon reach an alarming stage.

“Sustainable transportation system, whether in the form of a light-rail-transit (LRT) or an improved bus system, must be implemented on the island to smoothen traffic flow,” said Phuah.

LRT as the backbone

As Penang forges ahead to be a modern, intelligent state by the year 2023 – as outlined by the state’s development blueprint called the “Penang Paradigm”, its transportation needs will inevitably evolve towards one that places emphasis on effective space utilisation.

According to the Penang Institute urban studies head Stuart Macdonald, housing estates burgeoning on the island could be better served by an LRT that is complemented with an integrated feeder bus system.

Macdonald said if the state government is considering the light-rail-transit (LRT) system as the backbone for Penang Island’s public transport system, then LRT stations must be located strategically in residential neighbourhoods, so that residents can go on foot to catch the transport. Proper public parking spaces must also be planned in the suburbs for those who have to drive to catch the LRT, Macdonald said.

To encourage Penangites to embrace the habit of using public transport as part of their daily lifestyle, the planning and development of housing estates should adopt principles of universal design and access to make public spaces conducive for walking.

Public spaces aside, another issue that contributes to the congestion is the lack of seamlessness in public transport routes. A case in point is the current bus system that operates from its hub in Komtar.

Traffic engineer Tan Eng Hock said: “Currently, due to the lack of inter-connectivity of public transport routes, Penangites prefer to travel using their own vehicle, which adds to the number of cars and motorcycles on the roads.”

Tan opined that the state government needs to implement at least a two- or three-line LRT system to resolve the present traffic woes on the island, which can be well-supported by the current population size of Penang.

To further support the light-rail line, the state will also need to look into building multi-storey car parks at LRT stations for those who need to park their cars before travelling by LRT or taxi.

Commenting on the feasibility of the plan, Tan said having an LRT to link Komtar and Bayan Lepas would help ease congestion in Sungai Ara, Batu Maung and Bayan Baru.

He also said there is a need to integrate the LRT with a key bus terminal in the Free Industrial Zone (FIZ) and other strategic locations to allow Penangites to get off and catch the LRT to work.

With the recent unveiling of the Penang Transport Master Plan Strategy that aims to improve public transport on the island, one wonders about the fate of the precious heritage buildings on the island.

Notably, Penang Island – honoured as a Unesco World Heritage Site since 2008 – is ranked among the rare locations in Malaysia.

Faced with the need to revamp its transportation system yet retain its inherent identity, it seems Penang’s latest transport masterplan has to also take into account compliance with the state’s heritage conservation plan and Unesco operational guidelines to ensure the island’s age-old architectural structures are protected.

This echoes the sentiment expressed by Yan Lee, adviser of Penang Citizens Chant Group, who said that the LRT would be good for Penang, but it should be kept out of the heritage zone and tourist attractions in George Town.

Looking at things from a different perspective, having an efficient public transport system will certainly help reduce the impact of cars entering the heritage areas.

Moving forward, it is imperative that Penang grows to be a vibrant economic hub yet maintains its unique cultural legacy – and it all hinges on how the state’s ambitious transport masterplan is carried out.