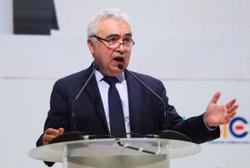 Jane Jamila Nakasumu, 27, founded her own company called Greenbelt Energy in Zambia in 2015 to fulfill the need for renewable and sustainable energy.

Zambia, a landlocked southern African country, is home to a multitude of wild landscapes and limitless biodiversity. It also has the highest deforestation rates on the continent.

Despite her company's ongoing efforts, Nakasumu wants to see greater consideration for the Zambian people. Air pollution caused by charcoal and firewood smoke is estimated to cause almost 7,000 deaths a year in Zambia.

For Nakasumu, the trigger for founding Greenbelt Energy was her own grandmother's partial blindness, after years of exposure to charcoal smoke through cooking.

Today, with the help of a team of volunteers, she visits rural communities to introduce them to the use of biogas. This natural gas is produced by fermenting organic matter to obtain a source of heat and electricity.

Can you describe the work of your company?

My social enterprise has helped communities create their own energy from available waste as feedstock. We have worked with rural agricultural communities in Chongwe to set up biodigesters where farm waste, including animal manure, has been used to create biogas as a safe cooking gas, providing access to affordable energy. The biogas has been used for cooking, heating, lighting and even electricity. So far, we have worked with five farmers and trained 100 youths in biogas and renewable energy.

You recently took part in a COP27 panel discussion. Could you tell us more about that?

I was approached by WWF Zambia to be a part of local discussions on COP27 around promoting cleantech in the agriculture sector and mitigating loss and damage. I believe that it is important for Zambia, as the lead negotiator of the African Group of Negotiators at COP27.

During the panel discussion hosted by ActionAid Zambia for the Africa Climate Week at the Global Platform Denmark, I was joined by climate activists who shared very personal experiences of ‘Dealing with Loss and Damage from a Zambian Perspective.’

About 60% of Zambia's population have been adversely affected by loss and damage, and Africa alone faces the risk of losing US$45bil (RM206bil) of agricultural production. As a young Zambian climate activist, I am demanding equal climate justice from all nations. The world should not demand for Africa to cut its emissions while they fire up their coal power plants.

Do you think Zambia has been involved enough in recent years on environmental issues during other climate summits?

It is important to bring back the conversation of deforestation to the table, especially since not much has been achieved from COP26, and discuss renewable energy primarily in terms of clean cooking energy and greengas. Greenbelt Energy is turning waste into greengas that can be used for cooking, heating and electricity. We need to accelerate the energy transition to greener fuels and technologies.

Zambia with other developing countries have not been able to fully benefit from climate summits because the developing world is responsible for (78%) of global greenhouse gas emissions, but the impacts of climate change are most felt by developing countries. There has not been enough accountability on who pays on loss and damage.

COP27 was here, and for a year, world leaders forgot about what they said at COP26. When faced with an energy crisis in Europe, coal-fired plants were reopened like nothing happened at COP26. Going forward, we need greater enforcement mechanisms for all resolutions.

Zambia has the highest rates of deforestation in Africa and is dealing with loss and damage. We need to put in place greater budgets for renewable energy and support the cleantech innovators.

COP27 concluded a day late, on Nov 19, making this summit one of the longest yet. What did you think of the final outcomes?

The US announced a new Energy Transition Accelerator to support developing countries on clean energy transition. The new initiative is expected to operate through 2030, possibly extending to 2035. Austria, Belgium, Denmark, Germany, New Zealand and Scotland pledged to provide funding to developing countries to help them cope with damage and losses caused by climate change.According to the 2022 State Of The Global Climate report, there is an urgent need to step up climate adaptation finance. However, the finance needed to implement adaptation plans is still far short of where it should be. – AFP Relaxnews