If there is one actress most deserving of being called Malaysia’s sweetheart, it has to be Angela Chan Mei Ngor.

For six years in the 1990s, her face was almost impossible to miss. She was in almost every single Chinese drama series on TV, from Torn Between Two Lovers and Lady Of The Land, to All In The Family, Sleeping With Enemy and Big House.

She was also a regular face in commercials, ads, billboards, and is a multiple winner of TV acting awards.

Then one day, she disappeared. Well, not literally, of course. After winning her fourth Best Actress Award in 1997, she announced that she would be retiring from acting.

“At the time, I had been working non-stop for almost six years straight. I hardly slept, missed meals, and just went from job to job. I was still young at the time, so my body could still take it,” she recalled.

The Ipoh-born actress entered showbiz almost by accident in 1988 when a friend submitted her profile to a talent agency.

“I never really wanted to be an actress. I was really shy and timid, and it was my friend who pushed me into it. Even after I was accepted into the agency, I rejected it the first time,” she recalled, adding that she decided to give it a shot later and has not looked back since.

Angela Chan retired in 1998 in order to focus on her family.

She got her breakthrough in 1993 drama All In The Family, which catapulted her to stardom. “I still remember the headlines at the time – ‘Ipoh girl cries her way to fame’! I was really good at crying at the time!” she said with a laugh.

“We were really lucky at the time, because people didn’t have as many choices of shows to watch, so we got really popular. When we visited shopping malls for events, there would be thousands of fans coming to meet us! I couldn’t even go out in public because everyone would recognise me!”

From 1993 to 1998, the jobs just kept on coming; to the extent that there was hardly enough time for her to rest. “After finishing one drama, I only got a maximum of two days rest before starting another drama. I didn’t have time to do anything else but shoot show after show. I did that non-stop for almost six years, every day, every month, every year, and sleeping only three or four hours a day. I was really really tired,” she recalled.

Finally, it all got too much for her. In 1997, Chan announced her retirement.

1993 drama All In The Family catapulted Angela Chan to stardom. Photo: Handout

According to her, the physical demands on her body in those six years was so great that she fell ill right after wrapping up her contract in 1998.

“After six years of non-stop work and hardly sleeping, my body just could not take it anymore,” she recalled. “I fell sick almost immediately (after retiring). I was feverish and weak, and took almost a month to recover.”

Physical demands aside, the main reason she retired from showbiz was to focus her attention on her family (she has two children, a son and a daughter).

“After that, I just focused on my family... I only came back for a few shows, like (2008 drama) Legacy Of Time, then Ice Kacang Puppy Love,” she said.

Her role as a single mother in the A-Niu directed Ice Kacang Puppy Love in 2010 gave Chan’s career a second wind – she was nominated as Best Supporting Actress at the 1st Golden Wau Awards in 2013.

“Since then I have only been involved in movies, not dramas, because filming dramas is too tiring!” she said with a laugh. “I’m also more particular about the script, to see if it is a fulfilling role. I want roles that are more challenging, and can help me develop (as an actress).”

One of Angela Chan's most memorable roles was 1993's Ban Sheng Qing Wei Liao, in which she got to play the same character from 15 years old all the way to 45 years old.

This stems partly from the fact that so many of her early roles were so similar in nature. “I was either the good daughter, or the good wife, or the good mother. There was just no chance for me to develop my acting at the time,” she mused. “I was almost playing the same role in every show, usually the timid, innocent girl who is always bullied, because I look like the type who always gets bullied!

One of her favourite shows is Ban Sheng Qing Wei Liao, in which she got to play the same character from 15 years old all the way to 45 years old. “That was more challenging for me, and it was a show that followed the characters from the 1960s to the 1990s,” she recalled.

Time to give back

Chan’s motivation for returning to showbiz is also very different these days. “I used to be so concerned about how popular I could get, how many shows I could make, and how many awards I could win,” she said. “I’ve been through all the glitz and glamour as a celebrity, and now I want to use that fame to try and do something good for society.”

One way she is doing so is through the Angela Chan Foundation, a charity organisation to help single mothers in need, which she is in the process of setting up.

“Last year, I released an album called The Code Of Happiness, and I’ve been doing a few concerts to raise money for single mothers,” she said.

Chan recently announced that she is producing a new movie called The Code Of Happiness, which will star Hong Kong actor Frankie Lam Man-lung in the leading role, and also Malaysian starlet Jeryl Lee. The movie is scheduled to start shooting in April, and proceeds from the movie will also be channelled into her Foundation.

In the movie, Chan will play a single mother who suffers from depression. During the press conference to announce the movie, the actress said she personally suffered depression about 10 years ago, and will be drawing upon that experience for her role.

Chan, who is also an astute businesswoman with her own production and event company, says she is a lot more mindful about her physical and mental well-being these days.

“My life is different now. My mindset is different as well. I used to be a young girl who just wanted to be as popular as possible. Nowadays, my priorities are different,” she said, adding that she is fortunate that many Malaysian fans still remember her.

“I’m very grateful for what I’ve experienced before, to be able to become popular from my very first show, and for fans to still remember me today,” she said. “I’ve been really lucky throughout my career, and now it’s time for me to give back to society.” 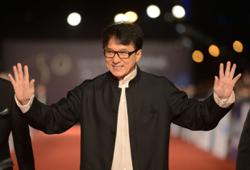