Gibson, a big pop star in the 1980s with hits like Foolish Beat and Electric Youth, counts herself as an actress now. Photo: Handout

Actress-singer Debbie Gibson knows what it’s like to be a world famous recording artiste at 16 and nearly forgotten at 20.

In her youth she sold more than 16 million albums. Her very first single, Only In My Dreams, jetted to the top of the charts almost overnight.

“I never just wanted to be a pop star because you have to be a strategist,” she says. “You have to be ahead of every trend if you want to have hits all the time. And you just instinctively made music, and if it happened to be what was gong on at the time, great.

“But I wasn’t looking to be Madonna. Madonna’s a genius at having a hit in every decade. To me just talking about it is exhausting.”

Like so many trends in music, the tide turned against her. “There was a huge backlash against my kind of pop music,” she says.

“I had this big burst, and then Seattle grunge came in, alternative rock came in, and people were suddenly calling MTV and saying, ‘We don’t want to see that Electric Youth video anymore.’ Quite literally. It was a love-hate flip, and it happens in pop.”

So Gibson scooped up her platinum records and headed to Broadway, where she started a whole new career in musical theatre.

Today, at 48, she’s enjoying a resurgence as an actress. She portrays a pop star who explores fulfilment as a music teacher in Wedding Of Dreams, which aired on the Hallmark Channel in the United States late last year. The movie marks her second in the same role for Hallmark.

But the transformations haven’t been easy, she admits, and the ravages of that early fame still cling. “I seemed older because I had a command of my craft, but emotionally I was even younger than my years,” she recalls.

“I was a late bloomer. I was like the girl who won’t grow up, which kind of happens in show business ... professionally I was wiser than my years, so it was kind of confusing.

“I was signing 100 checks at the age of 17 on the road. There’s this ‘arrested development’ thing that happens. Like one time in my 30s I took over my business management because I wanted to make sure I knew enough.

“I said, ‘I don’t want to be this blonde chick singer who doesn’t know anything about the business side of my business.’

“But there are certain things I didn’t do. I started my adult life with a lot of money – that has its perks and its downsides,” she says.

“At some point in my life I started normalising a bit more. I had a lot of undoing to do, physically and emotionally. One of the biggest traits of young stars is you become a people-pleaser. You think you have to say yes to everything. You think people are not going to like you."

“Now, if you don’t like me because I’m not superwoman, sorry,” she shrugs.

“You think whoever has all the power – and you forget that they can’t do anything without you. You’re the artiste, and they’re going to use you up and wring you out.”

Her struggles have been exacerbated by her battle with Lyme disease. She’s not sure how she contracted it, but says traditional medial advice wasn’t much help.

“Why was my system broken down so much that this disease was able to take me over? ... I always prided myself on being healthy, but I wasn’t really emotionally healthy and always pushed myself too hard,” she says.

“I pace myself now. I don’t have to fill an itinerary with 15 things in a day to feel good about myself. I feel better doing one quality thing a day and then resting.”

She’s invested in a 10-year relationship with her sweetheart, Rutledge Taylor. About that she says, “We’re together right now, but we’re going through a transition of sorts and figuring some stuff out. So it’s a little bit of a challenging time.”

Although she never married, she says she’s not afraid of marriage.

“What I realise is that life sometimes takes you on paths you don’t expect. Essentially I’ve been in a marriage of 10 years, without the piece of paper. Without registering for a toaster oven,” she smiles.

She extends her hand, displaying a ring Taylor made especially for her.

“For some reason this relationship felt like the commitment we had was enough, and kids in the context of the relationship, didn’t feel right in the beginning.

“Then I was dealing with the health stuff, and I needed my body to just be there for me. I’ve always thought about adoption anyway, so I’m very open right now.” – Tribune News Service 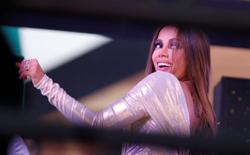