Sports commentator Rahman (Bront Palarae) is so excited and he cant hide it.

Striker Ali (Luqman Hafidz) picks up a brilliant pass from Ong Tiam Cai (Lim Jian Wen). He brings the ball into the penalty area. With less than five minutes left on the clock, he must make this shot or Malaysia will not qualify for the 1980 Olympic Games in Moscow. The atmosphere in the stadium is electric. Can he do it? Can he score this goal and bring the team to victory? He shoots and he .... Sorry, we’ll have to get back to you later about that.

Directed by Chiu Keng Guan, Ola Bola is set in 1980 where the focus is on the national football team training to qualify for the Olympic Games. Led by temperamental captain and defender Chow Kok Keong aka Tauke (JC Chee), the team members have a problem: they can’t seem to get along.

The tension among the players intensifies when a new coach is appointed (Harry Mountain, played by Mark Williams) and starts making drastic changes. One of them is getting keeper and veteran player Eric Yong to start as a striker, much to existing forward Ali’s dismay as he risks losing the coveted Number 10 jersey. As a result, the national team falls apart and performs badly during the friendly matches.

Ola Bola takes a break from the nailbiting excitement on the field by focusing on the lives of the players as everyday people. Chiu paints a simpler, realistic time where there are no multimillion-ringgit deals to save the players from #2kerja (working more than one job).

Off the pitch, Tauke is a rubber tapper who also works at a fun fair while keeper Muthu (Saran Kumar) gets a lashing from his father for missing his shift driving a lorry.

There is a sad moment when a teary Muthu tells Tauke that he continues playing football because that’s the only thing he knows how to do. But when things go awfully wrong on the field and with his home life, he realises that he knows nothing. Newcomer Saran gives an effective performance as the determined keeper. Be warned because he will make you cry.

At this point, we start to wonder if there is any hope for Ali, Tauke, Muthu and everyone else on the team. For those who follow the current development of our existing football team (Malaysia is currently No. 171 in the Fifa world rankings, which is an all-time low) – just like Muthu’s father, you’d be asking “What’s the point?”

But with Ola Bola, Chiu will not give in to pessimism. Through heartwarming scenes of the players bonding and leaving their egos behind, coupled with breathtaking imagery of the Malaysian landscape to show who they are fighting for, you’d want to start believing in the impossible too.

Ola Bola also has a lot of humour courtesy of sports commentator Rahman (Bront Palarae, clearly having fun with the role). His enthusiasiam for the game is infectious.

With Ola Bola, Chiu’s aim is to make a Malaysian movie for everyone to understand why it’s important to not red-card each other in real life. Through a combination of honest storytelling, sincere characters and exciting football action, the message comes through well.

Though the movie starts a bit sluggishly because there are too many characters with stories to tell, Ola Bola goes into the second half with a reinvigorated spirit. Just like that, Chiu caps Ola Bola with a brilliant and nailbiting finish. And yes, you will cry again.

Now, back to Ali and his make-or-break moment. Does he make it? You’ll have to catch the movie to find out. The only score we can talk about here is Chiu’s execution of Ola Bola and boy, what a goal. 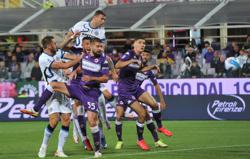