One Direction: This Is Us

By KENNETH CHAW
The boys of One Direction – Liam Payne (from left), Louis Tomlinson, Zayn Malik, Harry Styles and Niall Horan bare their hearts in One Direction: This Is Us.

Harry, Niall, Zayn, Louis and Liam wear their hearts on their sleeves in the surprisingly moving 3D concert-film, One Direction: This Is Us.

I’VE always felt that there was a simple equation that sums up all boy bands. Take a couple of okay-sounding singers with wholesome good looks, add a couple of hit-making composers and lyricists, a Wade Robson-looking dance choreographer, a zealous marketing team, some hideous colour-coded outfits and of course, lots of hair product, and voila!

Comprising Niall Horan, Zayn Malik, Liam Payne, Harry Styles and Louis Tomlinson, British pop group One Direction comes across that way at first – mechanical, manufactured and monotonous. The cynic in me is quick to brush off the 3D concert-film, One Direction: This Is Us, as another marketing ploy but this time, to humanise and give depth to the boys – mess up the equation a little, if you will.

Shot as a part-concert, part-documentary film by director Morgan Spurlock (Super Size Me), viewers get front row seats to the band’s live concert in London’s O2 Arena. There isn’t much going on here save for the fact that the 3D element is in full swing, bringing the group’s performance of hits like One Thing, What Makes You Beautiful and Live While We’re Young to life. 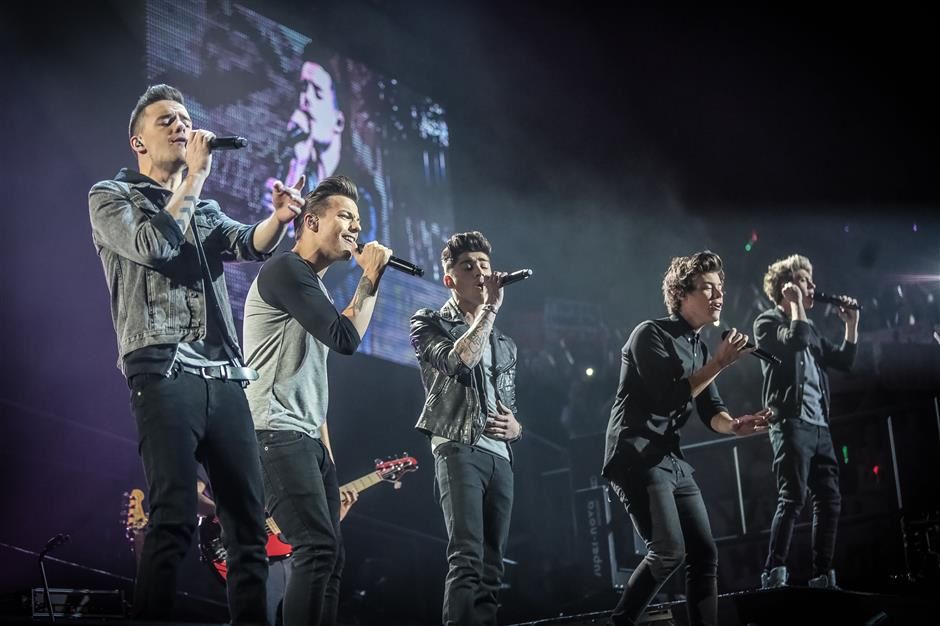 The boys of One Direction – Liam Payne (from left), Louis Tomlinson, Zayn Malik, Harry Styles and Niall Horan bare their hearts in One Direction: This Is Us.

The highlight of the 95-minute feature actually takes place in between these performances where the curtains are drawn and viewers get an intimate look at the band members’ lives. There’s plenty of goofing around at first (boys will be boys), from recklessly driving golf carts around (six minutes before show time, mind you) to making fun of their own dance routines so much so that choreographer Paul Roberts remarks, “these guys hate dancing with a passion.”

Well, at least it’s nice to know we’re not the only ones who think those moves are corny.

Elsewhere, Styles plays the role of resident troublemaker, stirring up mischief with the security guard and even loading himself inside a rubbish bin at one point (don’t ask why). But the joke’s on him when Payne pulls his pants down midway through a performance – to the delight of thousands of screaming fans, of course.

Somewhere in between all that healthy teenage rebellion, the film shifts gear and documents some surprisingly heart-rending moments. Viewers discover the toll fame takes on each of the One Directioners’ family as they return home only a handful of times in the past three years.

In one scene, Payne’s mum enters a shop to purchase a life-size cardboard cutout of her son. “We miss him. He left home (as) my little boy and became the boy in a magazine. If I have this, I can still see him every day,” she says, while wiping off tears.

In another scene, Payne’s dad laments that he can’t guide the singer along the road to manhood: “It’s not just the mums, it’s the dads that struggle, too. I mean, I can’t offer him much, I could take him out for a drink or play some pool. He’s the only lad in the family and I’ll never get this time back, he’s gone.”

Another emotionally-charged moment comes when Malik receives a call from his mum after buying her a new house. “I know that you always used to say, ‘I’ll get you a house one day when I’m older’. Thank you for what you’ve done for us,” she tells him.

The film also gets brutally honest about what being the biggest boy band in the world means. It means being woken up to record a song after getting just 10 minutes of sleep (poor Malik). It means questioning the motivation behind people who want to befriend you, as Tomlinson does. It means being labelled as famous and nothing more (Styles reveals he hates being called famous, stating, “that word takes a lot of substance away from that person. So you don’t remember someone as being funny or nice. They’re just famous.”).

There is a soul-baring moment towards the end of the film that tugs at my heartstrings. Huddled closely around a bonfire, the boys confront their fears about what will happen if all of these end. What will they do? Will they be friends? What will they be remembered for?

Sure, the scene looks staged (out of nowhere, they go on a camping trip at a wilderness in Sweden) but even so, there is an unmistakable sense of earnestness and sincerity.

What the film ultimately does – and does so well – is that it challenges the audience’s perception. The One Directioners aren’t members of a boy band but just boys. Ordinary boys, nice boys. Boys who worked odd jobs at a bakery and ToysR’Us. Boys who got an earful after spraying graffiti on their bedroom walls. Boys who had their first kiss under a tree by the river.

One Direction: This Is Us