For Joseph Chan, having Beary around has made the lockdown bearable. Photo: Joseph Chan

Two years ago, we might have jumped at the thought of spending a few weeks at home with our pets. But with the last 18 months being riddled with lockdowns and working from home, dogs and their owners have been living together a lot closer than ever before. We talk to three Malaysian dog lovers to discover how it’s going.

Treats and the future

Yin Tan, professional dog groomer in Kuala Lumpur, has run a mobile dog grooming business for years. The last 18 months have been very hard on her business, but Tan is keeping busy with selling home-made treats.

She also adopted Blue, a 12-week-old puppy, to round out her fur family of Bi-Bi, her eight-year-old Poodle, and Bei-Bei, a rescue who joined the family some five years ago.

“I’ve been with the dogs constantly for two months 24/7 and before that off and on for months too,” Tan shares. “Bi-Bi and Bei-Bei are senior dogs, and they may feel it’s a bit strange for me to be home all day. Sometimes they give me that look that says, why are you still here? I suspect they want a bit of alone time, maybe. 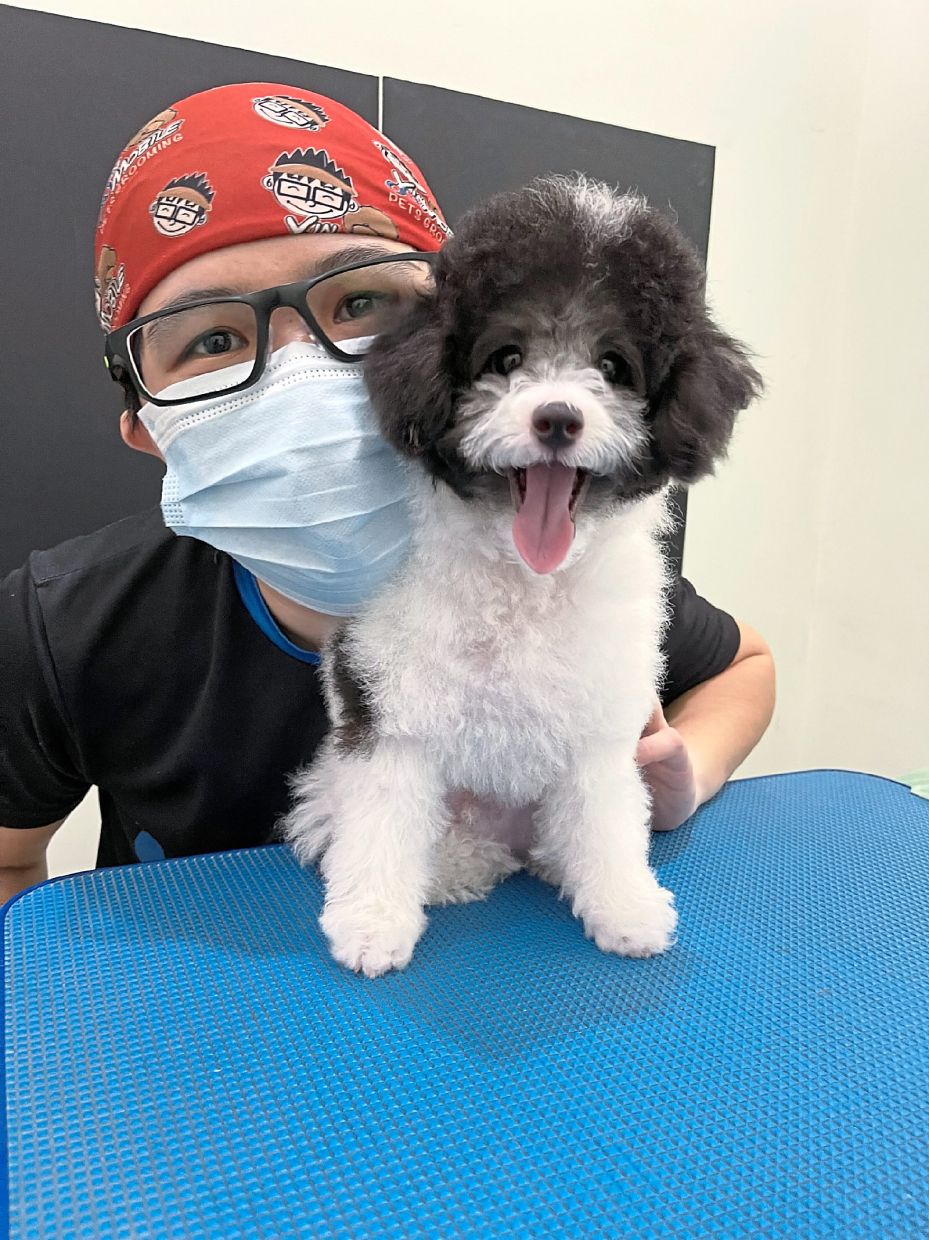 Yin Tan is worried that Blue will have separation anxiety when she goes back to work. Photo: Yin Tan

“When this is over, the senior dogs will be OK. They can cope because for them it will just be going back to their own routine. But I worry that when I go back to work, the puppy will miss me and have separation anxiety because all he knows is me being here.”

Tan is practical and forward-thinking, so she has a plan in place to prevent this issue.

“Bi-Bi is not too fond of Blue, as the puppy disturbs her, but they don’t fight, it’s just a little growl and some looks. Bei-Bei is also old, probably about 10, so I’m teaching Blue to play with toys,” Tan shares.

“Also, I let the puppy out for 30 minutes in the morning and again for a long time after supper so he can learn to be alone. He has his toys, his space, and he’s learning that not having me hovering over him is OK. This will help him accustom himself to being alone. This way he’ll not panic when I get back to work.”

For Peter Lum, the iconic fashion designer and public relations consultant, and Dindi, his six-year-old toy Poodle, the lockdown has been a mixed experience.

“Except for a mad dash to the pharmacy and little grocery store once every fortnight, we’re in the house 24/7,” Lum explains. “Dindi loves that we’re together all the time but she has developed this push where, when she wants attention, she wants it NOW.

“When she brings me her toy, I have to play immediately – even if I’m not in a mood to play. It can be irritating and sometimes I snap at her. It’s sheer frustration of course, and I feel awful pretty much immediately and then I have to apologise. She forgives me of course. And as my mum reminds me, Dindi doesn’t understand. It’s up to me to be better.” As Lum’s mum will be 80 this year, and Lum is a Type 1 diabetic, they are super careful about lockdown. For Dindi, this means a new routine.

“All her life whenever daddy comes home, Dindi jumps into my arms, ready to show her love and waiting for me to give my love. But now, when I come back, I have to shower first. It’s heart-breaking to have to tell her to wait because she doesn’t get it. From the look in her eyes, she’s wondering if she’s done something wrong. I’ve explained but it’s hard for her to learn to get used to the new norm. So Mum talks to her while I shower, and I think she understands. And after my shower, we have big hugs.”

Dindi eats imported dog food, which has also been an issue.

“They ran out of her food in our area, and when I went online, the price was double. I almost keeled over. But thankfully, when I went to get my vaccination, I spotted a pet shop and they had the pet food – two bags!”

Grooming is also a non-essential service, which is a challenge for Dindi as she’s a Poodle, a breed with a coat that needs regular professional attention.

“Poor Dindi is now two appointments behind so she’s a walking fluffbag,” Lum says. “I have no idea how to groom; it’s a professional skill I simply don’t possess. Brushing her is an unbelievable chore as there are tangles, and she yelps, poor girl.”

After a failed attempt with a beard trimmer, Lum ordered a grooming kit online, called his groomer for advice and hit YouTube for tutorials.

“Scissors have sharp ends and so I don’t want those near her as I’m terrified of cutting her by accident,” Lum shares. “So I used an electric razor. I did her legs first, cutting off the bulk of the hair and avoiding the skin. She knew I was nervous and was not cooperating. By the end of it, we were exhausted.

“On the second day, we were still both nervous. So on the third day, I talked to her, and then she was helpful. I ran the razor through her fur, poor darling, just shaved her down. No style or look. Just home cut from a papa who doesn’t know what he’s doing.”

For Joseph Chan, an IT professional in Kuala Lumpur, his companion Beary, a two-year-old Pomeranian, has made lockdown bearable.

“Talking or video on the phone just doesn’t do it for me,” Chan says. “I miss the human interaction of normal life. So while I’m working from home, Beary is the little furry package that keeps me company. I talk to him all day long.

“Beary is so clever – he can pick up when I’m down and he makes me laugh by throwing his toy and dancing for me. Also, in between lockdowns, when we can go out a little bit, being with him is an exception to social distancing.

“We go out in the car, him in the passenger seat, hanging out of the window, tongue lolling, and it feels like it’s a bit of normal life. It makes me happy just to look at him.”

The pair were already super close but the close contact of the pandemic has built on the connection.

“As there’s no more office time, I see him all day long, and that’s helped me understand his moods better. I have become much better at subtle signs that show when he’s tired, when he’s happy, when he’s a bit overwhelmed or bored. He loves me so much, and I’m glad I can be a better fur parent.”

The only thing is that Chan has discovered he’s a push-over.

“I used to feed him breakfast and go to the office, but now we’re together all day, Beary sometimes eats his food and then he gives me that look that I can’t resist. He’s often just trying it on because when I do hand over a bit more, he actually doesn’t want it. But out of consideration for my feelings, he nibbles at it.”

My Pet Story: Mei's narrative of her life, then and now