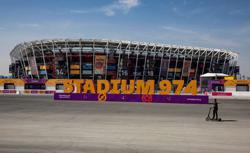 The opening ceremony of the FIFA World Cup at Al Bayt Stadium in Al Khor, Qatar, on Nov 20, 2022. Much has been made of the amount of money the emirate has spent on hosting football's premier event, with awkward questions raised about integrity. — Bloomberg

In the first few minutes of the opening of the FIFA 2022 World Cup game in Qatar, a long free kick is pumped into the Qatari penalty box. The goalkeeper fails to punch the ball away cleanly, and it ends up in the goal. The hosts are behind straight away.

Except that they aren’t. Almost inexplicably to the commentators at the time, the goal is disallowed due to an offside. A replay and analysis by a system of 12 tracking cameras and one chip in the football eventually produced a diagram illustrating an ankle had strayed over the line.

I thought, “Of course it’s offside. It’s Qatar’s World Cup, and they’ve paid enough to have a good tournament”.

Much has been made of the amount of money Qatar has spent so far to host the currently ongoing World Cup, which ends on Dec 18, 2022. Although nobody has precise figures, estimates are that the nation state has spent over US$200bil (RM881bil) since it was awarded hosting duties in 2010. That’s more than the country’s annual GDP (which, in 2021, was US$179.6bil or RM784bil).

In contrast, the 2018 World Cup in Russia cost less than US$12bil (RM52.9bil at today’s exchange rates) and the competition before that in Brazil, in 2014, was estimated to cost US$15bil (RM66.09bil). Even with inflation factored in, Qatar’s figure is a long way ahead.

What does US$200+ billion buy you? Seven new stadiums (and a completely refurbished eighth), a whole lot more hotels and roads, and a patch of desert transformed into a municipality for 200,000 people that the Qatar government calls “the smartest, most technologically advanced city in the region, if not the world”.

But does it get you a good football team?

Qatar’s mission to build a football team started well before their World Cup bid. In 2004, they opened the US$1.4bil (RM6.17bil) Aspire Academy to identify and train the best athletes in the world, including football players. It scouts an estimated 5,000 11-year-olds each year, and the reward for the most promising is seven years at the academy, trained by elite coaches. In 2014, Qatar’s football team won the Gulf Cup, in 2019 the AFC Asian Cup, and they came third in the 2021 FIFA Arab Cup and the 2021 Concacaf (Confederation of North, Central America and Caribbean Association Football) Gold Cup. This year, 18 Aspire Academy graduates are part of the Qatar national team squad shortlisted for the FIFA World Cup.

With this much money (with questionable return on investment) being spent, there are, unsurprisingly, question marks about not only how much Qatar is willing to spend but also what rules they are willing to bend, sometimes to the limit.

In 2019, PSG found itself in the spotlight when UEFA, European football’s governing body, was extraordinarily lenient in determining whether the more than €300mil (RM1.4bil) the club spent on players two years earlier was legally within the club's budget. (Its profit before tax in 2017 was €40mil, or RM184mil.)

And if you look as far back as 2010, of the 22 FIFA members that had voted to award Qatar the 2022 World Cup, 16 were subsequently implicated in or investigated over some form of alleged corruption or bad practice. Even Gianni Infantino, the current FIFA president, was caught up in allegations in 2020 when he had secret meetings with Switzerland’s Attorney General, who also happened to be investigating corruption in FIFA at the time.

With this much money at stake, can you forgive anyone who gives FIFA a sideways glance over whether everything it has done so far is above board? When what’s at stake is billions, what are people willing to do?

Given this background, not only does football’s premier organisation have to be clean, but it also has to be seen to be clean. This is especially important in any institution that has been plagued with corruption. In such an organisation, with years of allegations, question marks and court cases, it is incredibly important that everything is seen to be above board. Otherwise, public trust is affected.

If you insist on elevating questionable characters to the highest levels, it is absolutely fair for people to remain sceptical (whatever one might say about being innocent until convicted). In fact, I would argue it’s better not to have such people in positions of influence until they have been cleared.

And if you insist that we have no choice, because everybody fit for position at the top has question marks over his or her integrity ... well, I would say perhaps you should look for new people.

In the end, what cleared the doubt over Qatar’s national team is the fact that, despite the dubious offside early on, they went on to lose not only the first game but also the next two. They became the only host nation to lose all three of their group games.

Now that they are out of the picture, nobody is even raising the question of corruption or legitimacy – whatever the actual truth may be.

What's your pick of the best ideas from Malaysia's GE15 manifestos?

Malaysia's general elections: Vote for the candidate, not the party

When people in positions of authority cheat

Let's hear it for better cybersecurity 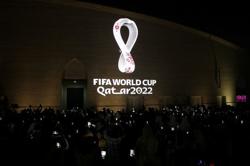