The Zeppelin Grandstand in the German city of Nuremberg was once the scene of huge Nazi rallies, where Adolf Hitler and his cohorts roused hysteria with their vision of a Third Reich. Photos: Timm Schamberger/dpa

It is a gaunt embodiment of fallen empire: The giant stone slabs where Nazi leaders once held military parades and addressed seething crowds are today crumbling and missing whole sections, with weeds and bushes sprouting from myriad cracks.

This is the Zeppelin Grandstand in the southern German city of Nuremberg, scene of the huge rallies of the 1930s where Adolf Hitler and his cohorts roused hysteria with their vision of a Third Reich.

Its pomp and splendour long gone, and decades of neglect now pose a preservation dilemma at the protected historical site.

"Only ruins will be left for future generations if nothing is done," says Heike Wolter, a restoration expert from the nearby city of Bamberg.

Tasked by the Nuremberg authorities, her company is assessing the condition of every stone of the 370m-long and up to 20m-high structure.Using a hydraulic lift to reach the top, Wolter knocks on the masonry with an iron rod. If it gives off a dull sound there is a cavity inside and her colleague notes it down.

They will map 50,000sq m like this, including the ramparts around the Zeppelin field where the masses cheered marching Wehrmacht soldiers and labour forces every year between 1933 and 1938. The Golden Hall inside the Zeppelin Grandstand, a site in the southern German city of Nuremberg used by the Nazis to hold military parades and address the crowds. Photos: Daniel Karmann/dpa

Large sections of the grandstand and the Zeppelin field are now cordoned off with fences and "Do Not Enter!" signs due to the risk of falling masonry.

The city would like to make these areas, including the Golden Hall inside the grandstand, accessible once again so people can have a sensory experience of the site's importance to the Nazi regime.

Interest is still strong: Some 300,000 visitors from around the world come annually to the 11sq km site to ponder the Nazi past.

"This is where they enacted the idea of ​​the national community, which was central to the National Socialists," says Hans-Joachim Wagner, head of the city department that oversees the former Nazi grounds. "But it also reflects the hierarchical structure under National Socialism."

Since ever fewer eye witnesses of these events remain alive, architecture itself is becoming increasingly important as a guardian of history – even of the worst kind. Using a hydraulic lift to reach the top, Wolter checks the masonry of the Zeppelin Grandstand with an iron rod.

"Our task is to use the relics to keep the memory alive and to warn," Wagner adds.At a cost of around €85mil (RM393mil) the city wants the buildings repaired in such a way that they remain in their current condition and can be entered safely.

But how that will be achieved is unclear and a deeply sensitive issue. Many people would prefer to see the buildings fall into total ruin and use the funds for other cultural and educational projects instead.

Heated discussions also took place recently about the former Nazi Congress Hall located on the rally grounds. During the renovation of the Nuremberg Opera House it will be used as an alternative venue for the state theatre.

Critics fear that the view of the facade, which is still undergoing restoration, will be blocked and the remembrance site watered down as a result.Meanwhile, how do you achieve the goal of halting the decay while keeping the passage of time visible?

"The preservation should break through the self-portrayal of the Nazis," says Joerg Skriebeleit, director of the Flossenburg concentration camp memorial site. "You have to rise above its ultra-elevated sense of self and take ownership of the place." 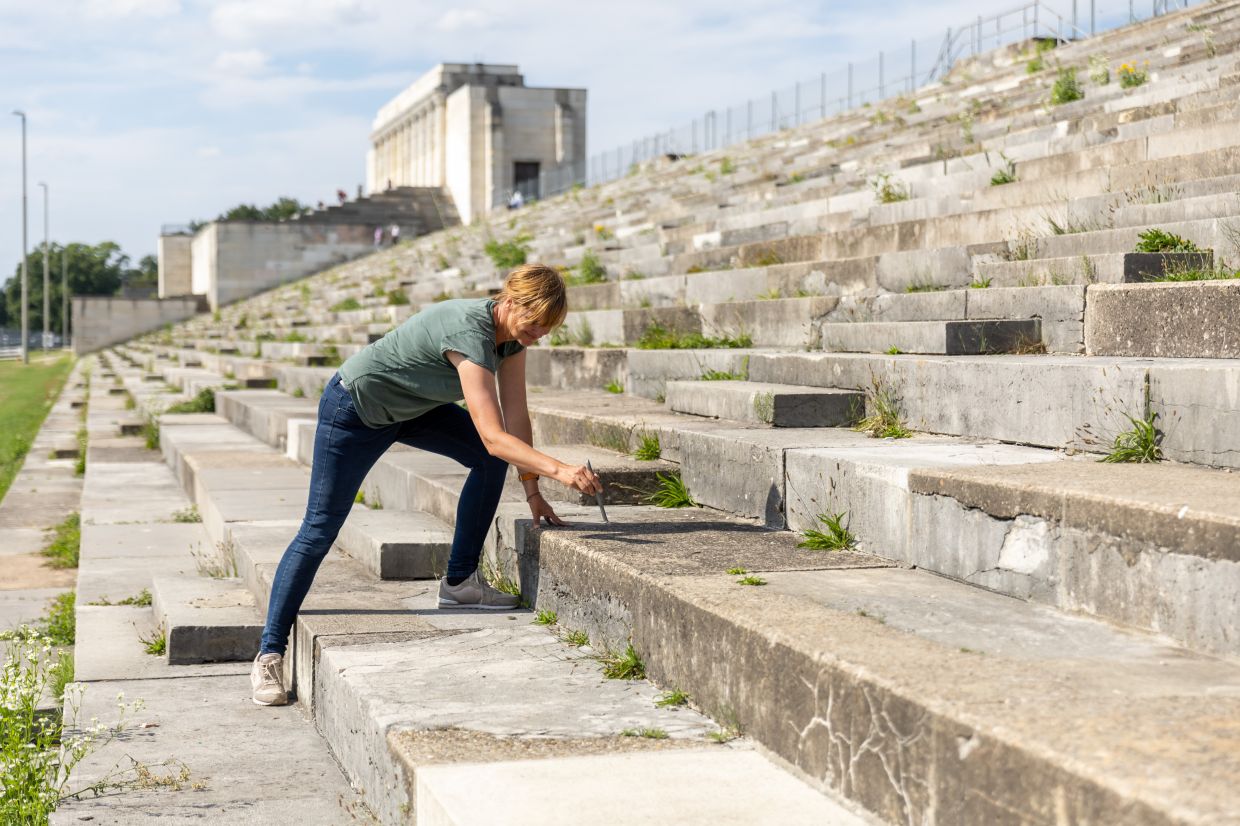 Wolter assessing the condition of every stone of the structure that makes up the Zeppelin Grandstand in Nuremberg.

That approach already saw success at the main rally grounds, he says, which were converted into a public leisure area, complete with football stadium. A car race and a music festival are also held there.

A bold approach would also make sense architecturally, says Skriebeleit. For example, by using modern materials so that the repairs are clearly visible.

The city therefore avoids the word "renovation" when it comes to the grandstand. Nothing should be embellished optically, only repaired, is the official position.

From 2015 to 2016, Wolter's team tried out various repair techniques on sample areas of the structure, from replacing entire panels to repairs with mortar.

Now they are checking which ones proved most durable and will make their recommendation by June next year. According to city department head Wagner, the major works could then begin in 2024. – dpa