One of the cogs in the Hamburg paternoster, a slow elevator that moves continuously, with a loop of open fronted cabins that run the height of a building. Photos: dpa

A young art historian accidentally discovered what is likely the world’s oldest paternoster elevator in what felt like an Indiana Jones moment.

While doing some research, Robin Augenstein came across an old blueprint of Hamburg’s Fluggerhaus, a historical office building with Art Nouveau touches that dates back to 1908.

He then discovered that the structure in the heart of the northern German city’s harbour was home to an aged paternoster that had been boarded up, hidden from the world and forgotten for more than four decades.

A paternoster is a slow elevator that moves continuously, with a loop of open-fronted cabins that run the height of a building.

People, assuming they are sufficiently agile, step into the moving compartment as it passes their floor, then step off when they reach their destination.

The lifts are named after the “Our Father” prayer, referring to the string of prayer beads that also glides steadily without stopping in the hands of the faithful. 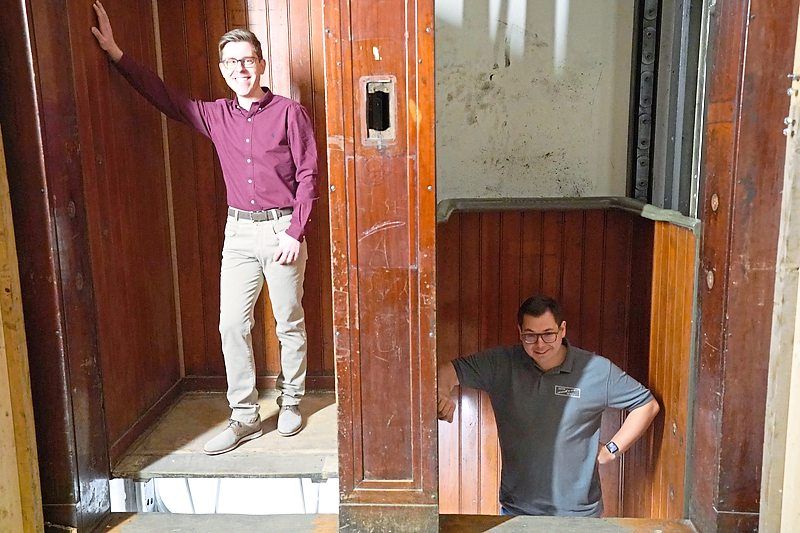 Robin Augenstein (left) and Patric Wagner in the world’s oldest paternoster elevator in the Fluggerhaus building in Hamburg harbour, Germany.

The lifts were invented in London in 1875 but Hamburg was once a paternoster pioneer, with more than 100 in action at around 1900.

Most paternosters have since been superseded by more modern lifts in the interests of safety, so Augenstein, 28, knew he had stumbled across something special.

He persuaded the building’s tenant and the Office for the Protection of Historical Monuments to join him in further investigations. They grabbed torches and headed down to the basement where they found cogwheels, quaint mechanics that showed the six-storey building was home to a relic of elevator culture.

They agreed to revive the paternoster and give what is thought to be the world’s oldest original circulating passenger lift a whole new lease of life.

It runs on electricity that powers 10 gear wheels made of solid cast steel, one of them a good 1.5m high. These form the basis of the system that consists of two thick chains that run parallel up to the top floor.

Fourteen cabins are suspended from them, each able to fit two people. They are made of stained mahogany, which was also used for the access frames on each floor. 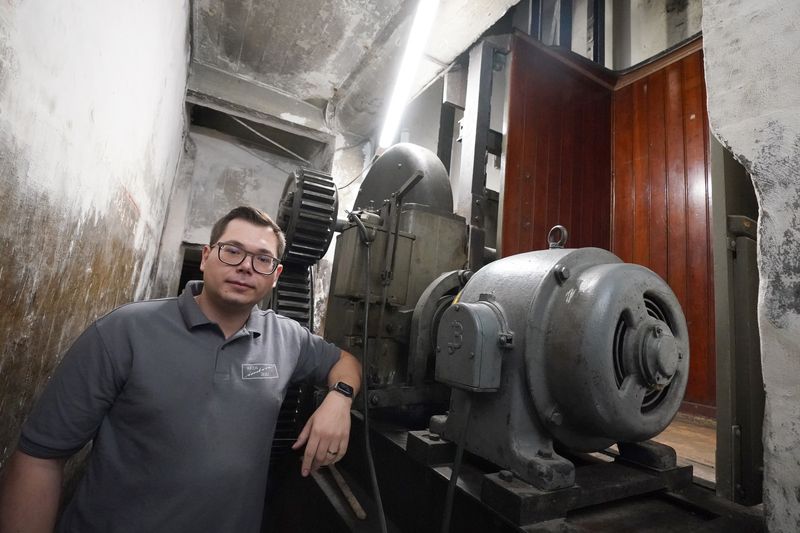 Patric Wagner, Managing Director of Imbora Aufzugsdienst, stands in the machine room of what is probably the world's oldest paternoster in the Flüggerhaus. Thanks to the research of art historian Robin Augenstein, an old paternoster was rediscovered in a Hamburg commercial building. Now it is being restored to its former glory.

“This is more than a standard model. It is a particularly beautiful paternoster and unique in Germany in terms of its design,” says Augenstein, whose doctoral thesis addresses the heritage value of old lifts.

“Most of the 20 or so paternosters that are still running in Hamburg are no longer in their original condition. Often, solid wood like oak, mahogany or even softwood has been replaced by plastic, meaning a loss of charm and value as a historic monument.”

As the oldest preserved paternoster in the world, the Fluggerhaus lift now outranks that of the Vienna House of Industry from 1910.

That is also thanks to Signa Real Estate, an investor that bought and renovated the historic office building – and was willing to fix the paternoster too.

After costs running to several hundred thousand dollars, future tenants, employees and visitors will be able to enjoy a historic glide through the building. Or, if they opt to take the stairs, they can admire hand-painted majolica tiles.

Specialist builders began the restoration process by removing the wooden panelling to determine the level of wear and corrosion, and look at parts that had been repaired badly, says their boss Patric Wagner.

“Then we removed all the cabins, each weighing 250 kilos. We needed five men with electric chain hoists.”

They needed to work with great precision, he says. “That was tough.”

A mechanical engineer, Wagner was determined to prove it was possible to repair the lift in a way that was both sustainable and stylish.

A 40-tonne truck transported the wooden elevator cabins to Aichwald near Stuttgart where specialists straightened the wood that had warped over time and stripped off multiple layers of paint. They then sandblasted, re-welded, primed and repainted the structures.

Once the gears and chains were overhauled in Hamburg, the wooden elevator cabins were reassembled on site.

“They are so incredibly compact and well built. And with regular maintenance with special oils, they won’t break in the future,” says Wagner.

The lift is fully functional, taking four minutes to glide up all the floors. Some tweaks, including Plexiglas guards, have been installed to prevent visitors from falling into the elevator while allowing them to view the working structures.

The last touch will be the wood restorer, though as work continues in other parts of the harbour building, creating dust and dirt, the team is holding off for now. – dpa/Ulrike Cordes