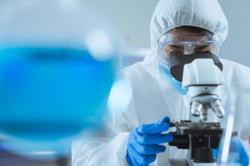 Daily items like nonstick pans have long been linked to serious health issues, a result of their toxicity and extreme resistance to being broken down as waste products. Photo: AFP

"Forever chemicals" used in daily items like nonstick pans have long been linked to serious health issues – a result of their toxicity and extreme resistance to being broken down as waste products.

Chemists in the United States and China on Thursday (Aug 18) said they had finally found a breakthrough method to degrade these polluting compounds, referred to as PFAS, using relatively low temperatures and common reagents.

Their results were published in the journal Science, potentially offering a solution to a longstanding source of harm to the environment, livestock and humans.

"It really is why I do science – so that I can have a positive impact on the world," senior author William Dichtel of Northwestern University told reporters during a news conference.

PFAS, or per- and polyfluoroalkyl substances, were first developed in the 1940s and are now found in a variety of products, including nonstick pans, water-resistant textiles and fire suppression foams.

Over time, the pollutants have accumulated in the environment, entering the air, soil, groundwater and lakes and rivers as a result of industrial processes and from leaching through landfills.

A study published last week by Stockholm University scientists found rainwater everywhere on the planet is unsafe to drink because of PFAS contamination.

Although PFAS chemicals can be filtered out of water, there are few good solutions for how to dispose of them once they have been removed.

10 down, thousands to go

Current methods to destroy PFAS require harsh treatments, such as incineration at extremely high temperatures or irradiating them with ultrasonic waves.

And incineration isn't always foolproof, with one New York plant found to still be releasing some of the compounds into the air through smoke.

PFAS' indestructability comes from their carbon-flouride bonds, one of the strongest types of bonds in organic chemistry.

Fluorine is the most electronegative element and wants to gain electrons, while carbon is keen to share them.

PFAS molecules contain long chains of these bonds, but the research team was able to identify a glaring weakness common to a certain class of PFAS.

At one end of the molecule, there is a group of charged oxygen atoms which can be targeted using a common solvent and reagent at mild temperatures of 80-120°C, decapitating the head group and leaving behind a reactive tail.

"Once that happens, that provides access to previously unrecognised pathways that cause the entire molecule to fall apart in a cascade of complex reactions," said Dichtel, ultimately making benign end products.

A second part of the study involved using powerful computational methods to map out the quantum mechanics behind the chemical reactions the team performed to destroy the molecules.

The new knowledge could eventually guide further improvements to the method.

The current study focused on 10 PFAS chemicals including a major pollutant called GenX, which for example has contaminated the Cape Fear River in North Carolina, a water source for 350,000 people.

But it represents just the tip of the iceberg, since the US Environmental Protection Agency has identified more than 12,000 PFAS chemicals.

"There are other classes that don't have the same Achilles' heel, but each one will have its own weakness," said Dichtel in a statement.

"If we can identify it, then we know how to activate it to destroy it." – AFP/Issam Ahmed

What does a chief resilience officer do? World Architecture Day 2022: How design promotes health in buildings and cities
Heart and Soul: Remembering Queen Elizabeth II
Those LED street lamps may be disturbing your sleep
2022 Aga Khan Award for Architecture winners put people and environment first
Climate change is threatening Vietnam's coffee exports
90% of plastic waste in the North Pacific Garbage Patch largely comes from 5 countries
Copper, the unsung hero of whisky, celebrated in new Macallan release
Turning to bartering as inflation rages out of control
What is 'green chemistry' or 'sustainable chemistry'?
Why tropical storms have names