Jyn is a shy girl but a good barker. Photo: Anita George

Our street looks typically suburban, but we offer a little green space and most of us are animal lovers. Apart from our pets, we have an active wildlife community.

My neighbour on one side has a bird nesting in his tree, my neighbour on the other has tupai stealing her limes, and our roof is home to yet another bee hive.

Our neighbour Anita George across the road has a rescue dog and, until this week, I thought that Guard Dog Jyn would keep other animals at bay. Turns out, I was wrong.

It started with a snapshot in my WhatsApp. A three-foot monitor lizard, captioned my kitchen tenant. Then another pic, this time showcasing a cute yellow banded blunt scaly nose and a very bright knowing round eye. The cousin who lives in the air well drain.

Naturally, I demanded to hear more, especially because I recognised the yellow banded nose.

Every few days, a lizard with exactly that nose slides out of the kitchen storm drain and up our back yard tree, tongue flicking. The sight of him drives Tic Tac into a frenzy.

When she spots him, our girl touches the glass with her paw to reassure herself she’s safe and then she watches with horrified fascination, puffed up like a powder puff with excitement and fear. Turns out, the yellow banded lizard is Quasimodo and he has made his home at Anita’s. Jyn is enthusiastic but not a good hunter.

“Quasi sleeps in the pipe that connects the indoor air well to the garden,” Anita explains. “He’s an outdoor lizard but he does try and come inside, popping his head into our air well. It drives Jyn bonkers, and she barks really loudly.”

That’s a surprise because Jyn is not a noisy girl. When she arrived four years ago, she was all legs and nose. She was also extremely shy. But with a happy, kind home, complete with garden and freshly cooked daily dinners, she’s become quite brave.

But professional barking inside the home is a bit much. “I put a weighted mesh over the drain so Quasi can’t come in,” Anita says. “He doesn’t like it but he and Jyn just don’t get along. Jyn chases him when she sees him outside.”

So what about the kitchen tenant?

“Well,” says Anita, “after we had those snakes around, I’ve been a bit cautious about going to the bin and cleaning behind things.”

This resonates because I’m the same. Some months ago, we had the python that killed Swooner, and then a cobra in our living room, and then our neighbour, the one with the bird nest, found another cobra in his living room cupboard.

While I’m not usually fanciful, I’ve become a bit cautious, jumping at electrical cables that look particularly menacing and poking a broom in the fern clump in the garden before allowing Target to go for a pee.

It was a relief to find Anita is the same. “Last week I cleaned the kitchen,” she continued. “There was this odd streak on the floor, and I couldn’t figure out what might have caused it. I just cleaned it and went on with my day, but then Jyn started barking.” 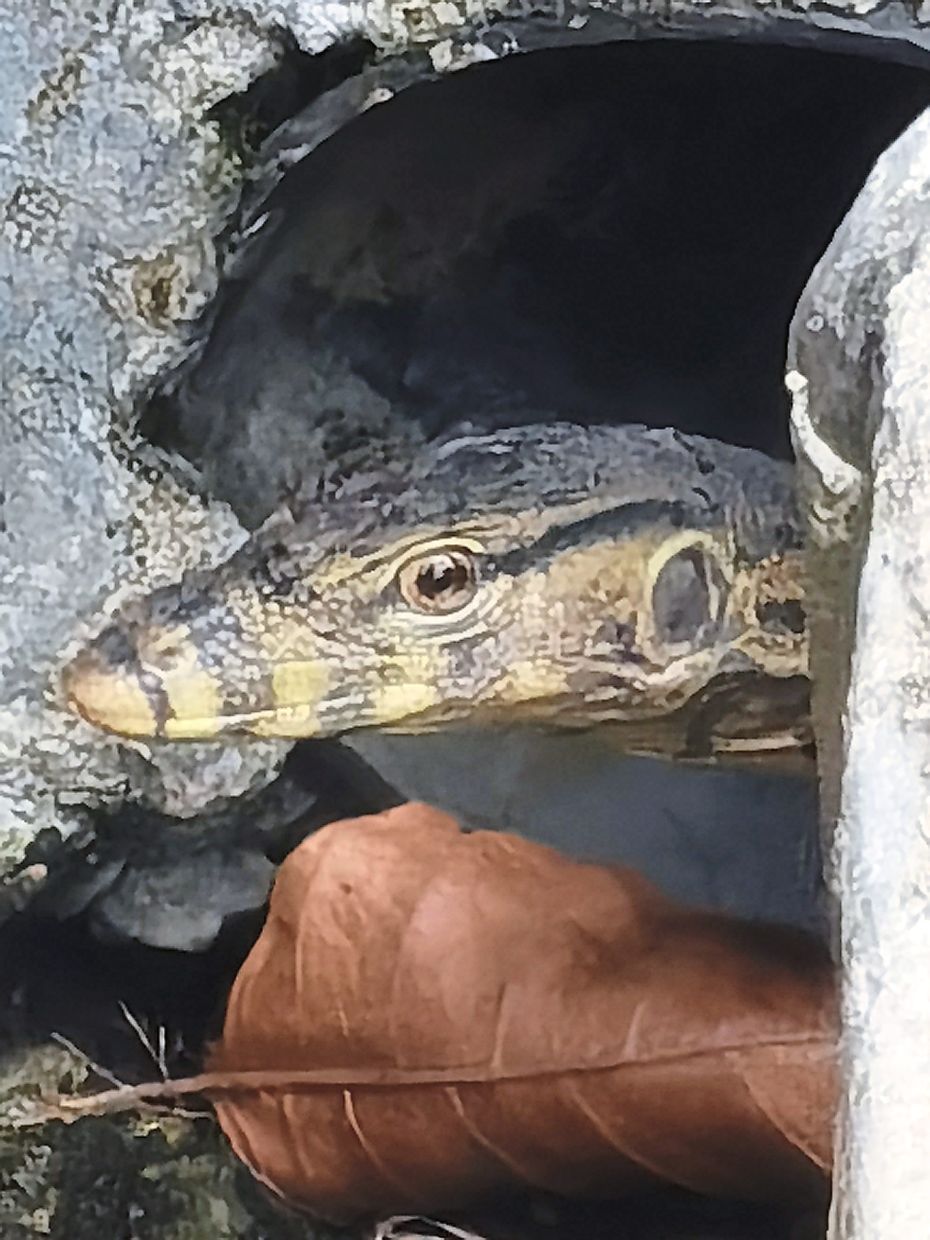 Quasimodo tries to break into the house sometimes.

“She was barking at the air well,” Anita said. “And it wasn’t her tupai bark or her bird bark but a warning bark. I couldn’t see a thing at first but she just kept at it. Then I saw a tail.”

“Of course, I thought snake. But then I saw the blunt nose and remembered that streak of dirt. I realised a lizard had come into the house.”

What followed, was a cartoon-style race and chase.

“I got a broom and poked about under the table and chair. Then this fellow bolted and headed right for my bedroom. I gave chase, and he double backed, shot past me, and blasted into the kitchen.”

“Jyn was barking away and we thought she might deal with it,” Anita sighed.

But as it turned out, Jyn is great with the woofing but utterly useless at repelling reptile invaders. Worse, Anita realised she didn’t have a plan either.

“I have my broom but I don’t want to hurt the poor thing, do I?” she moans. “So, we put Jyn in the garden and told her to chase Quasimodo while we try and kick out the kitchen fellow.”

As the lizard had taken cover under the kitchen cupboards, Anita opened the back door.

“I told him to go,” Anita said. “I explained I can’t open the back door for long as God knows what else will stroll in.”

Despite the attempt at sensible negotiation, the lizard stayed put. For a whole week, Anita and the interloper dodged each other. She occasionally caught sight of a nose or tail but that was it.

Just when it seemed she had acquired an indoor lizard, Anita walked into her bedroom and caught him posing out in the open. He looked at her, she looked at him, and then he shot under the bed.

“I shut the door quick and thought I might MacGyver him out,” Anita explains. “But he was two-and-a-half feet long, not the kind you can throw a bucket over and pick up.”

“Then I had a brilliant idea. I opened up a cardboard box, making a kind of tunnel. Then I poked the bed with a broom.”

“He shot out into the box but he didn’t exactly fit. So I had to push another box into it.”

With the lizard wedged inside the double box, Anita realised he weighed too much to pick up. Also, there was no way she could slide anything underneath.

“I shuffled the boxes along, inch by inch, with him making horrible noises and complaining all the way. But I kept at it, shuffling him out the room, through the kitchen and onto the back doorstep.

“And you know what? When I lifted the boxes away, he didn’t even stop! He just flicked his tail and dashed into the storm drain.”

But the ungrateful lizard wasn’t the end of it.

“Jyn is furious,” Anita sighs. “She knows the lizard has gone and that it was me who kicked it out. Now she’s telling me that she’s a hunting dog and I ruined her fun.”

Jyn may be upset but we’re enjoying the happy ending. While we draw the line at cobras in the living room, we’re fans of peaceful and respectful co-existing with nature.

We’re sending Jyn a box of dog treats to make up for her disappointment. As for Tic Tac, I’ve told her that there are now two giant lizards out there, Quasimodo and his much bigger pal. In anticipation of his appearance, we’ve dubbed him Eli, after Eli Wallach who played Calvera, the freeloading bandit in The Magnificent Seven. Also, we’ve double-checked that our drains are covered! 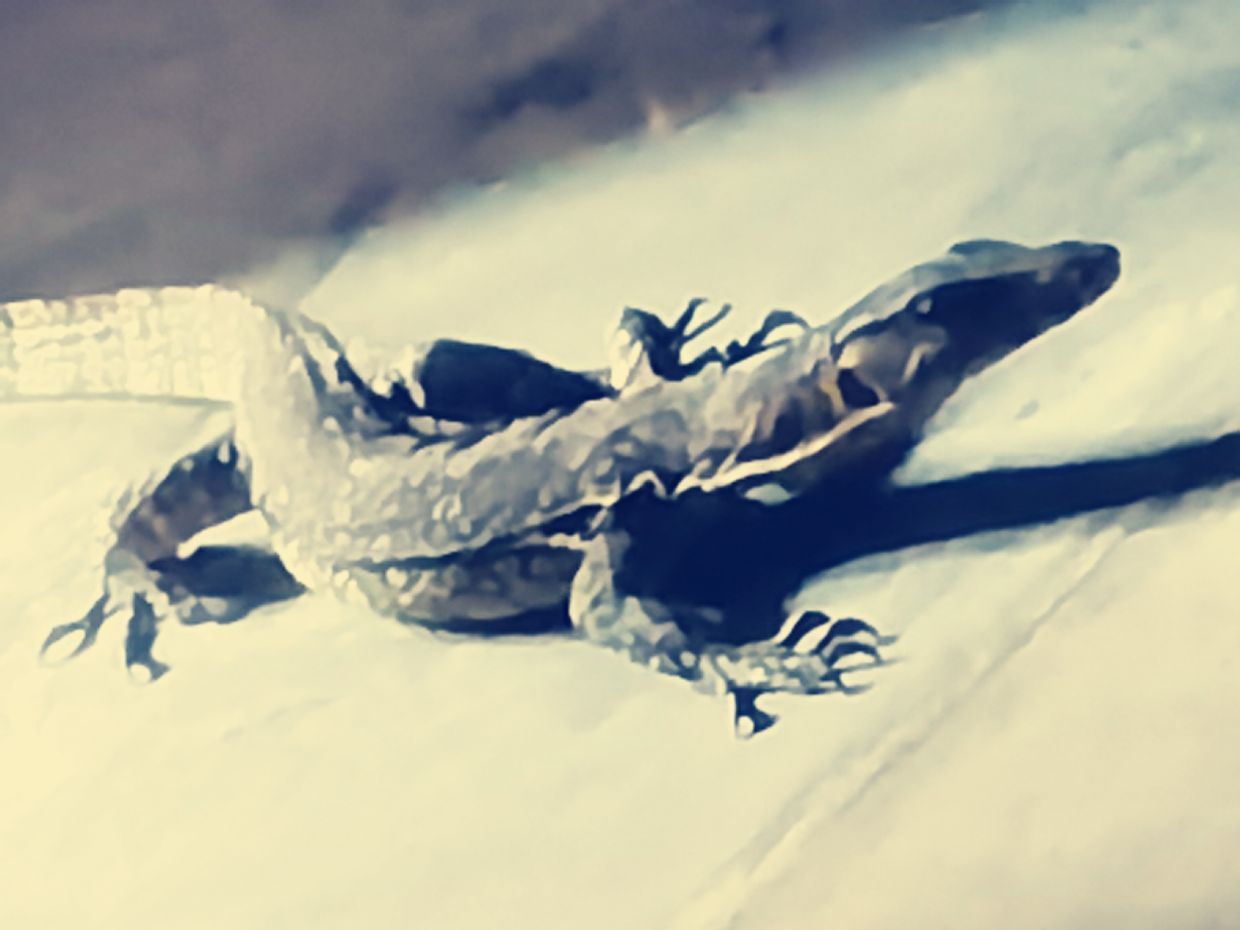 Malaysia is home to more than a hundred lizard species, from the tiny geckos that live in our homes, to the giant monitor lizards that cruise our ponds and rivers.

Two of the most striking are the green tree dragon that looks almost luminous and the comb crested forest dragon that has a row of spines growing up its back like a mini dinosaur.

Worldwide, the smallest lizard is the Brookesia nana or nano-chameleon from Madagascar that is 1.3cm long. The largest is the Komodo Dragon from nearby Lesser Sunda islands in Indonesia. They can grow to 3.1m.

Most interestingly, many lizards can change colour. Some change colour so they can hide better. Others use it as a kind of warfare, warning other animals to stay away. During mating seasons, lizards may also use a colour change to signal they’re in the mood to mate.

While lizard droppings in the house may be messy, little lizards eat insects including mosquitoes, flies and cockroaches, making them an effective form of pest control.

Big lizards will also eat bugs, but they feed mostly off bigger prey including frogs, mice, rats, crabs, fish, and snakes. They can also climb trees, eating birds and eggs.

While some can look quite fearsome, most lizards are shy. They run away when startled, and prefer to stay away from the unknown, which includes pets and humans. However, when treated correctly, lizards can make sweet and interesting pets. Roscoe is four months old. He’s new to the shelter and so he’s had his first shots but will need more.

This boy is playful, friendly and smart. He’s also full of life, and hyperactive.

Ideally, he is looking for a home where he can be a good boy with people who lead an active lifestyle.

Katz Tales: Cat vs human – A battle of wits

Droughts and rising seas put Cuba’s agriculture under threat
What is 'carchitecture' or the art of including the car in the interior design?
Climate crisis: There is no Planet B
How to safely dispose of your old e-bike battery
Saving Malaysia's songbirds – the straw-headed bulbul and white-rumped sharma
COP27: The climate summit flinched on phasing out all fossil fuels
In Cape Verde, ocean waste is being turned into bags and bracelets
Consumption, not crowd, is key to climate change
This design incubator programme energises Malaysia’s timber and furniture sector
Malaysians wear saree and finish 5km charity run in Penang