Using drones to detect and save animals in trouble

Drone pilot Doug Thron uses his drones and infrared photography to unearth wildlife that are victims of natural disasters. His exploits are chronicled in the series Doug To The Rescue. — Photos: CuriosityStream/TNS

The new high-flying drones are utilised for all kinds of missions, from surveillance to backyard play. But Doug Thron uses them to save the lives of animals.

Thron is an aerial cinematographer who has adopted drone photography for his art. But he elevated that art when he discovered infrared drones that could pierce the devastation left by wildfires and hurricanes, revealing wildlife trapped in their wake.

“I’m a pioneer of using infrared drones with spotlights and zoom lenses to rescue animals, ” he says.

“I’ve been somewhat, for lack of a better word, on a crusade, not only to rescue the animals from natural disasters that just keep getting bigger and bigger, but also to get this incredible technology known by the world. Because my hope is that one day these infrared drones rescuing animals will be as popular and as common as say, helicopters are for rescuing people.” 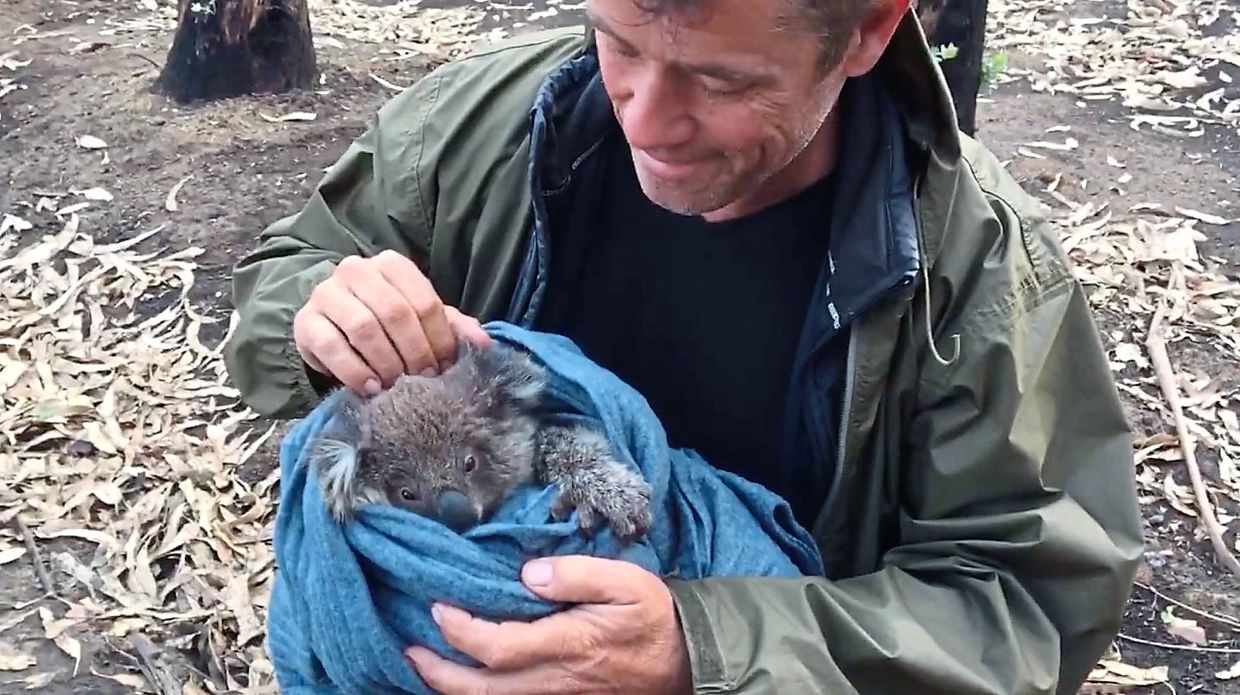 Doug Thron rescued this koala after the devastating Australian bushfires.

Thron’s exploits are the subject of CuriosityStream’s new series, Doug to the Rescue. Thron travels all over the world where disaster strikes, illuminating lost pets, stranded koalas and terrified wildlife.

He first got the idea when a filmmaker united Thron with a man who was using an infrared scope to rescue cats after the Santa Rosa, California, fires.

“We were both chatting about it, and we were like, ‘God, if we could put one of these infrared scopes on a drone it would be unbelievable.’ Fast-forward, about a year later, I was just volunteering with the Sea Shepherd boat out in the Bahamas, and I was using a drone to rescue animals out there. And I found it exceedingly hard to find the animals because of debris piles, ” he says.

“Imagine hundreds of houses all being smashed up and debris piles 30 feet tall, and boards and nails and everything. I found it super hard to find the animals. So then I thought back about an infrared scope and thankfully, one had been invented for public use that would potentially work on this drone.

“So I mounted it on the drone, and it worked incredibly well, and from there I started putting spotlights on drones and putting 180 times zoom lens cameras as well. That’s basically how I got started with it, was from those events in my past, ” he says.

Thron’s first rescue was a dog, a Royal Bahamian Potcake. “He was right in the middle of Hurricane Dorian, a 40-hour-long hurricane with winds up to 180 miles per hour (290kph) and 30-foot (9m) deep water and hundreds of houses smashed; hundreds of people passed away. And he was literally smack dab in the middle of this... with a snapped leg and banged-up face, ” Thron recalls.

He not only saved the dog, he kept him, crowning him “Duke”.

“He was super sentimental to me, being the first one, ” says Thron.

“For the first six or eight months, he wouldn’t bark. He wouldn’t wag his tail. He was just, I think, pretty shell-shocked – probably had all sorts of muscles torn. He had a super bad case of heartworm. And now when you see him, he’s like the most loving dog. Jumps all around, licks, barks and yeah, you would never even know that he had ever been through a hurricane. And it’s pretty miraculous to see.”

Sometimes animals are unable to flee, and Thron finds them alone and abandoned. “In Louisiana when we were doing the rescues, I was uncovering dogs that were chained and left for dead, chained to a car, ” he says.

“And through this series, we get to see animals months later that were chained to cars and left for dead and starved, pretty much just about ready to die. And then you see them months later and they’re jumping around licking you and super happy in their new adopted home. So, it blows me away how these dogs can recover and turn out to be everyday normal dogs in a short period of time.”

It’s not only dogs he salvages, but an array of wildlife, including cats. Thron recalls one special rescue of a badly burned black cat. “I had to grab him underneath some burned stuff. And he bit and clawed and everything like that, but he was so burned up that if I didn’t grab him, he was likely to die and run off to the woods.

“And a couple of months later it was interesting because the vets were putting honey on these wounds that were almost burned down to the bone. A couple of months later the wounds are just about healed, and the cat’s the most loving, purring cat. And I was kind of like, ‘Oh, damn. I wish I had adopted this little black cat because it’s just like my little Mittens when I was a kid.’” – Tribune News Service/Luaine Lee

Donkey milk soap soaking up fans in Jordan
World's largest plant capturing CO2 from air starts up in Iceland
Scotland's latest tourist attraction is a whisky wonderland
7 hunting dogs that make good house pets
Greek winemakers delve depths of underwater ageing
‘Plant’-ing that zen feeling around your home
My Pet Story: The kitten who thinks he is a puppy
Research on beards, wads of gum, wins 2021 Ig Nobel prizes
'Accidental interior designer' Joe Chan on his style and how he started out
Heart and Soul: Life lessons from making mooncakes