#Star50: Star Media Group's 50 years of raising funds for disaster victims and those in need 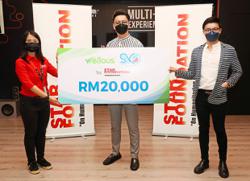 The aftermath of the massive floods in 2014 in Kampung Kuala Nal, Kuala Krai, Kelantan. Photos: Filepic

Disasters, be they man-made or natural, are part of life. But whenever tragedy strikes, we see hope in the form of humanitarian efforts springing into action, as well as various fundraising initiatives to help mitigate the effects of the aftermath.

The Star, as a media organisation and a company, has been playing a role in spearheading fundraising campaigns for various causes since its inception in 1971.

Here’s a look at such efforts held over the decades:

In support of Malaysia’s dedicated frontliners in the ongoing battle against Covid-19, SMG and Star Foundation established the Star Frontliners Initiative in March 2020. To kickstart the initiative, Star Foundation contributed RM1mil to the fund, at the same time rallying the nation to raise more for the purchase of much-needed medical supplies for hospitals and medical staff.

Then SMG and Star Foundation chairman Datuk Fu Ah Kiow said providing financial aid for medical purposes was one of the ways the media company reached out to those in need.

“Malaysians have always been at the heart of what we do at Star Foundation. With the help of our readers, we have sponsored many medical surgeries in the last five years.

“Now, we want to do more. These are trying times but we can come out stronger if we stand together, ” he said. In support of Malaysia’s dedicated frontliners in the ongoing battle against Covid-19, SMG and Star Foundation established the Star Frontliners Initiative in March 2020. To kickstart the initiative, Star Foundation contributed RM1mil to the fund.

In total, over RM2.6mil was raised and channelled to purchasing essential medical supplies such as ventilators, ICU beds, ultrasound machines and personal protective equipment, which were distributed to 34 hospitals and 15 state health departments nationwide.

“We thank those who made the effort to contribute towards our healthcare, ” Melaka Hospital director Dr Zaharimah Abdul Kadir said.Perak Health Department director Datuk Dr Ding Lay Ming praised SMG for being proactive.

“The beds are important and critical items. We really appreciate the help and support, ” she said.

Its director, Dr Heric Corray, who received the items on behalf of the hospital, said, “I would like to thank Star Foundation for donating these items. This donation will definitely help improve our care for Covid-19 patients.”

“We really appreciate this very much as it will be very helpful to the medical wards and ICU. It will really help our staff in this challenging time and I would once again like to express my appreciation for this kind of donation to Hospital Sungai Buloh, ” said hospital director Dr Kuldip Kaur.

Medical frontliners in Sabah and Sarawak also received surgical gloves thanks to the initiative.

Sabah Health Department director Datuk Dr Christina Rundi said such assistance was helpful and much needed as it showed that they had support from the public.

“This ensures that hospitals dealing with Covid-19 cases have continuous supplies of personal protection equipment, ” she said.

SGH director Dr Ngian Hie Ung said the gloves would be used by the hospital’s staff, especially the frontliners.

“We appreciate donations and the public’s concern at this time, ” she said. A shop owner cleaning up the mess left by the 2014 floods in Kuala Krai, Kelantan.

The 2014 floods in Malaysia, which occurred mid-December, were among the worst disasters to hit the country. Affecting the north-eastern states, an estimated 200, 000 people were displaced either temporarily or permanently.

Besides providing news updates, The Star also launched a fundraising campaign to aid the flood victims, working together with the Malaysian Red Crescent Society (MRCS) and Firefly Airlines.The Star’s headquarters in Petaling Jaya served as a drop-off point for donated food and supplies, which were then sent to the Firefly office.

The National Association of Malaysian Life Insurance Fieldforce and Advisers (Namlifa) was one of the parties that came forward to contribute aid by donating RM20, 000. The Star responded to the 2014 floods in Malaysia by taking part in The Star-MRCS-Firefly Relief Fund.

“We decided to contribute through the Star-MRCS-Firefly Relief Fund as we are confident that the organisation will channel the donation to the right beneficiaries, ” then national president Victor Kho said.

“We have collected about RM300, 000 over the past 13 years with the support of our staff to help needy patients and these kind of relief funds, ” she said.

There were many other donors from the private sector as well as individuals. Overall, overwhelming public support for the fund resulted in a constant stream of supplies for the displaced flood victims. Meulaboh, a coastal city in West Aceh, was hit the hardest during the 2004 earthquake as it was closest to the epicentre. The area was reduced to a wasteland but this mosque stood untouched.

Boxing Day in 2004 was the day that tragedy struck Indonesia. On Dec 26, one minute before 8am local time, a massive earthquake measuring 9.1 on the Richter scale struck off the west coast of northern Sumatra.

The quake triggered a devastating tsunami that killed 170, 000 people in Indonesia alone, and over 220, 000 throughout the region. More than 1.7 million people were also displaced.

To date, it remains the world’s third biggest quake to occur since 1900. The impact was so great that the ocean floor was lifted by 15m in some areas.

Hardest hit was Aceh province, although the tsunami also affected coasts as far away as East Africa.

Immediately stepping up to help, The Star started the Earthquake/Tsunami Relief Fund – in association with the Malaysian Red Crescent Society and Mercy Malaysia – on Dec 28. The Star Earthquake/Tsunami Relief Fund in 2004 totalled over RM27.3mil.

The Malaysian public from all walks of life – underprivileged children included – came together to donate to the fund. The support was also overwhelming from various NGOs, SMEs, corporations and other organisations.

Less than 24 hours after the fund was launched, over RM1.1mil had been raised.

Stories of generous donors were highlighted in the newspaper frequently to boost awareness.

Among them was Kenyan student David Owino Tolosaid, then 27, who worked closely with his fellow students at a private college in Nilai, Negri Sembilan, to raise RM3, 300 for the fund.

“We should live as a global family and share problems and happiness, ” he said.

Sixty children from Rumah Hope, a home for neglected and abused children, also donated one month’s pocket money towards the fund. They chipped in RM12 each after hearing about the tragedy, contributing a total of RM720.

Doris Lee and Shamala Ilonga, then 15, said it felt good to help the children because they knew what it was like to go through tough times.

“We feel very lucky to have a home and a school to go to. We hope the kids have a place to stay and that they can go back to school soon, ” they said.

When the fund closed in early April 2005, it had collected over RM27.3mil. The monies were then distributed to three organisations – the MRCS received RM12.3mil, Mercy Malaysia RM10.3mil and the national disaster aid fund (Tabung Bantuan Bencana Negara) RM4.7mil.

In 2001, the United States’ invasion of Afghanistan caused the displacement of several million people. Many of them fled the country to escape the Taliban and the hardship of war. This saw many Afghan refugees living in impoverished conditions, with little access to food and basic necessities such as clothes and cooking supplies.

Responding to the situation, in early Oct 2001, The Star – in collaboration with the Malaysian Red Crescent Society – launched a fundraising campaign which was held until late March 2002.

Among the donors were the Penang Muslim League, which contributed RM10, 671, and students from SMK St Mary Taman Intan Baiduri, Petaling Jaya, who raised RM1, 300.

The collection was initiated by a group of students from a club called Good Neighbours, led by its president Syarifah Noor Aliza Syed Zain.

‘’We hope this contribution will show what students can do to help others. A lot of innocent children have suffered in the war and this must be looked into, ’’ she said.

In all, the campaign raised close to RM670, 000. Concurrently, The Star also organised charity gala dinners and shows, which further generated RM1.5mil.

At the end of the campaign, nearly RM2.2mil was channelled to the International Committee of the Red Cross and Red Crescent Societies through MRCS, which helped to ease the suffering of some 10 million Afghan refugees.

North Koreans were in dire straits from 1994 to 1998 as they experienced major floods, a severe drought and hailstorms, in addition to an economic crisis.

In 1997, there had been no rain since May, and about 70% of the crops were destroyed. The calamities led to a great famine and mass starvation.

For the first time, North Korea – often described as a “hermit kingdom” due to its long isolation – asked for food aid from the world. The North Korean Sall Fund in 1997 was in aid of famine victims in the Hermit Kingdom.

The International Federation of Red Cross and Red Crescent Societies (IFRC) sent out an urgent appeal for help to support 5.6 million North Koreans before winter set in.

The Star responded by launching the North Korean Sall Fund (sall means rice in Korean), from Aug 3 to Nov 3, 1997, to buy food for the famine victims. The fund crossed RM1mil in a week. By the end of the campaign, it had exceeded RM12.5mil.

North Korea vice minister at the time, Choi Jin Su, said the generous donations had enabled urgent food and medicine to be given to high-risk victims. “We are especially grateful to The Star for initiating the fundraiser, ” he said.

Malaysians from of various ethnicities, faiths, ages and occupations gave generously towards the fund. The campaign also inspired a series of donation drives and fundraising events by kindergartners, schoolchildren and college students. Shelter children, deaf kids and the disabled gave towards the cause too.

Sports clubs and associations, including the Badminton Association of Malaysia and the Malaysian Taekwon-Do Federation, sprang into action too.

Members of the Harley Motorcycle Owners Club of Malaysia gave rides for a fee, at a charity carnival. Then club president Lennard Lim said riding a big bike would be meaningless without being able to use it for charity.

“Their ideology is different from ours, their political system is also different, but we do not want these things to stop us from giving help, ” he said.

In 1979, Kampuchea (Cambodia) faced a major humanitarian crisis whereby hundreds of thousands of people fled to Thailand to escape famine and the Khmer Rouge regime. Millions of those who remained had to fight severe hunger.

The Star launched a campaign to raise funds to aid the Kampucheans. From early November 1979 to late January 1980, the newspaper carried news of the crisis on an almost-daily basis. Donors and fundraising efforts were highlighted to create more awareness.

By the end of the campaign in January 1980, over RM1mil was raised and handed over to the United Nations High Commissioner for Refugees for disbursement.