Our little street is just like a million other neighbourhoods in Malaysia. We live in two-and-a-half storey link houses, all of us tied neatly to the houses next to us.

Although it looks like an endless expanse, we're really small islands with eight houses sharing roof space. However, most of the time, we're not terribly aware of it.

Looking up from the street, some of us have small satellite dishes, relics of the times when it was the only way to get good TV. The iron plant racks are empty as even our keen gardening friends haven't found flowers that can survive direct blazing tropical sun augmented by heat bouncing off roof tiles.

To humans, the roof just doesn't figure much. But for Tic Tac, our little kitten, it is a paradise. Every morning when Target and Swooner go for their early morning walk, Tic Tac dashes upstairs. Climbing up the book shelf, she wriggles through the window and emerges on the roof. 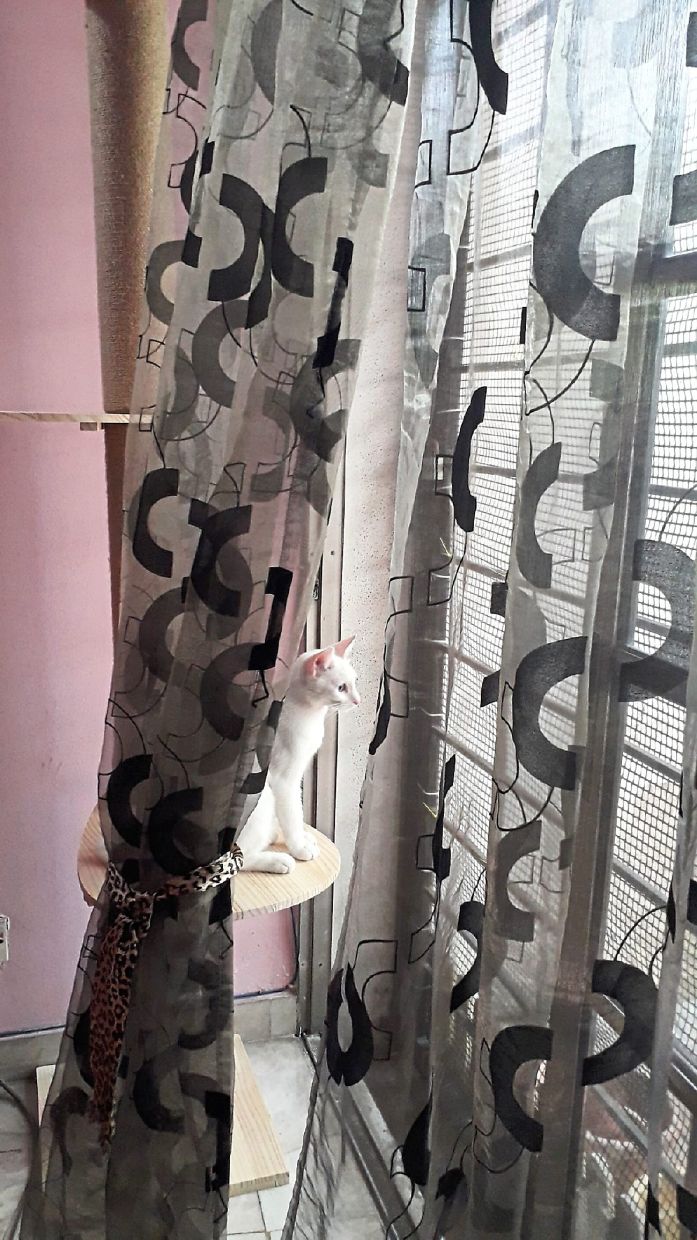 Tic Tac surveying her domain, waiting for some unsuspecting prey to come along.

Her first port of call is to run from one end to the other, looking at the street below. Our neighbour next door was surprised one morning to find our girl dancing in front of her window, shouting meow at Swooner and Target who were on their ground level inspection tour.

Pre-Covid, Tic Tac also chatted with early-bird neighbours. She's on first-name terms with the mum who walks her two tots and she always greets Charlie's mum.

But for Tic Tac, the roof is more than a platform for exercise and socialising; it is also a hunting ground.

In addition to birds and flying visitors like bees, our tree is now very tall and the branches spread over our roof. As it connects the ground to the roof, it is a pathway for the tree shrews and various other wildlife.

Tic Tac is fascinated by it all and she's ace at the cute kitten squeal and pounce. However, she's also an ex-street cat, a rough and tough fighter and forager. And so a few months ago, she came running downstairs, clutching her first trophy: a lizard the size of a shoe.

The poor thing was so big that when it wriggled, Tic Tac could barely hang on to it. Jaws gaping, I could see triumph with caution. Our kitten was wondering if perhaps she'd captured a creature that might easily turn around and eat her!

She handed the lizard over easily enough and, after patting her, I took him outside. Luckily, he was unharmed. The scales around his body were a bit damp from cat drool, but there were no cuts or grazes.

He was in shock. When I put him on the wall by the tree, he just sat there, gulping in air. I had a close look at his claws and tail to reassure myself he really was OK, and by the time I took his picture, he'd recovered his mojo because he hissed at me. Ungrateful, right?

Later, by trawling Lizards of Malaysia, online, we think he was part of the Agama family, possibly a Garden Fence Lizard.

Whatever he was, Tic Tac was filled with pride. She went right back upstairs and, for weeks, she stalked every little thing that moved.

Her next catch came the week the MCO started. She was out there in the early evening, jumping around as the bats started their night's hunt, when she came across a Money Shrew.

Goodness knows what he was doing up there, but my guess is he climbed up the tree and found a paradise of bugs in the leaf litter on the roof. Money Shrews are small, only three to four inches (7.5 to 10cm) long, but they eat their own weight in cockroaches, beetles and other bugs every day.

As they're nature's biological pesticide, I really love these little creatures. Sadly, Tic Tac had a firm grip on this one and was extremely reluctant to let it go.

The poor little shrew was curled up in a ball, eyes huge and staring. He was so incredibly scared, he couldn't even squeak.

Our hunter was growling with delight. Insisting it was hers, she held on to him, even when I blew in her face and wriggled my finger in her ear.

Thinking to distract her, I picked her up and toted her outside. Then, setting her down on the bench, I cajoled, begged and ordered her to let go. Our princess held on stubbornly.

Finally, I had a brainwave. I put a finger over her nose. With a mouth full of shrew, she gulped and then, furiously, spat him out.

As Tic Tac called me every name under the sun, I was relieved to see the shrew was fine. He was a bit damp but there were no cuts and no blood. He uncurled, checked himself over, and then, after gazing at me in panic, he shot off. He went straight through the grass and up the tree.

Also read: Movement is vitally important for the health of animals 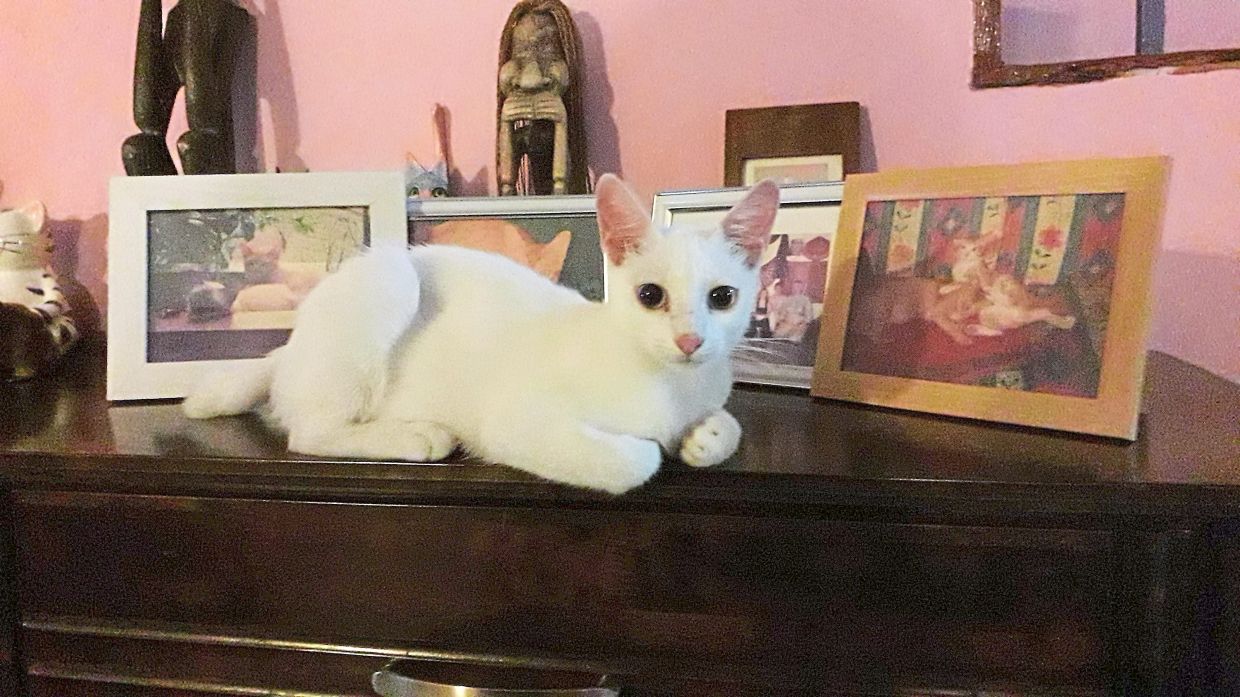 Tic Tac, the Great Hunter, at rest. She is also referred to as Bird Breath and Mouse Stalker.

It took a lot of treats and apologising before Tic Tac forgave me. However, she's a sweet girl and eventually she agreed to forget about it.

Except, she didn't really because last week she came running down the stairs, once again growling with smug conceit. She had a little bird in her mouth. It's bright yellow tummy was heaving with terror as it's blue and black wings beat fruitlessly.

Tic Tac spotted me, remembered the incident with the shrew, and visibly decided she wasn't going near me again. But, just as she was about to turn tail, she made an error: she meowed at me.

I think it was supposed to be kitty version of,"Na-na na-na na-na! You can't get me!" but as she opened her mouth, the bird was up in the air. It went straight up, turned a sharp left and flew through the kitchen and out of the window.

Tic Tac was after it like a white streak of vengeance. She bounced off the glass, screaming in rage. Thankfully, I managed not to laugh. I even pretended I was terribly sad and shocked for her. I don't think she noticed my smile as I handed over a compensatory treat.

So, our girl is definitely a stunningly successful Great Hunter. When we refer to her as Bird Breath and Mouse Stalker, she preens with pride.

What's fascinating is the behaviour of the birds and shrews in the tree. They used to just go about their business while our girl danced on the roof. But now, when she appears at the window, all the birds scream in warning. When she puts a paw through the trellis, they fly off, fluttering and shrieking their danger calls.

Tic Tac loves it. Head up, tail low, she steps out, surveying her domain. Then our little white tiger trots off, pretending not to hear the birdcalls. As far as she's concerned, it's a tribute, well-deserved recognition that the bestest, baddest hunter in town is on the prowl.

Birds call for all kinds of reasons: to announce they're ready to mate, to warn others off their territory, to say they've spotted the sun or a juicy bug, and also, to tell others that there is trouble about.

When birds spot a predator, they call frantically, alerting their friends and neighbours. The alarm spreads extremely rapidly; some studies have found it travels over hills and mountains at more than 100 miles per hour (160km/hour).

Bird call alarms are also picked up by other species. Mice, rabbits, meercats, deer, squirrels and other animals will freeze when they hear bird alarms and then check for danger. Scientists think that some species may deliberately live near bird colonies, just to benefit from the aerial alarm system.

In addition to calling, the birds will also jump around, flapping their wings. It's exactly what we human people do when we're afraid: we scream, jump up and down, and flap our arms.

But some birds go one step further: they will gather together and fight off predators. It's an amazing thing to see because birds aren't gentlemen. When they swoop on an attacker, they go all out, bashing away with their wings, pecking, dive bombing and even pooping on the enemy.

Ornithologists call this "mobbing" and see it often in bird species, including crows, jays, terns and blackbirds. Usually it is limited to birds mobbing other birds as well as cats, dogs, and other animal predators. However, they sometimes sight and target humans – usually the ones who kill them, hurt them or destroy their nests.