Do not be surprised if your cat seeks you out for more cuddles during the MCO. — 123rf.com

Our phones and social media are overflowing with bored people trying to cope with being locked up for weeks on end. Target, Swooner and Tic Tac have decided they are living in paradise.

Swooner was the first to notice the Movement Control Order because he came back from his early walk and found the car still in the drive. Super excited, he immediately demanded a sumptuous special holiday breakfast.

Target and Tic Tac piled in, purring away. Then they spent the whole day visiting Tom in his office, snoopervising me in mine, and dragging us out with meows whenever they wanted cuddles, fresh biscuits, their ping-pong ball rescued from under the sofa, and other cat emergencies.

By the third day, the fuzzies figured we were settled in for an extended break. Accordingly, they organised us to take full advantage. Apart from the extra walks and cuddles, they have taken up new activities. The most exciting of these is their socialising over video streaming.

With my therapy work, Target is an old hand at chatting online. He loves soft musical voices best and although he is super shy in person, he has several friends he chats with regularly.

In the office, the gear is set up to be robust so it doesn't matter if he rubs a friendly fang on the camera or pats the screen with a paw.

But when we were having drinks with friends over WhatsApp, and our old boy decided to add in his meow, he didn't realise that my phone was leaned rather precariously against a little bottle of water.

Target bounced up, headbutted our friends a cheerful hello and practically destroyed my phone by smashing it to the floor. Then he trod on it, giving our friends a close-up view of his stripy tummy. Finally, he mooned them.

We thought it was cute but Target is sensitive and so he sat with his ears pinned back, glaring. I had to apologise to him and now when we have cocktail hour, I hold the phone so he can talk to his particular friends.

Swooner is shy about video socialising but he is totally fascinated by the big group classes that take place upstairs. I found our middle cat sitting on the stairs, ears twitching in fascination at the different voices and accents he was hearing.

Now when the classes start, Swooner creeps up there, acting as though he's stealthing into a cinema to catch the matinee for free.

Little Tic Tac is still convinced that voices coming out of boxes is creepy and she won't have anything to do with it. This may be because on the few occasions she has videobombed, her striking looks caused spontaneous exclamations of excitement.

While she avoids the cameras, our kitten has decided that bed-making is the best fun a girl can have. I hold the sheet and flap it over the bed while she dives underneath, shrieking meow and puffing up her tail.

Bed-making started as a bedtime game but now she stands in the hall, meowing until I come to see what she wants. Yesterday, we played three times – and it was pawsome.

All three cats are also getting super creative about racing. They run a circuit through the house that involves racing around my office, pounding upstairs, circling Tom's desk and then hightailing it downstairs, over the sofa, up the cat tree, down the chair and up the next cat tree, and repeating that until they flop down, gasping for breath.

Target is so trashed after a wild race that he collapses on the big chair, paws up in the air, tummy aimed at the fan.

Tic Tac is also practising her circus moves where she jumps from the floor on to the back of the chair, runs down one arm and then pounces across and up the other arm, all without touching the human sitting in the chair.

As she's still learning, I have several little claw marks on my arms where she slipped. I reminded her that humans don't have fur, and we must be treated gently, but from her wide-eyed look of amazement, I got the message I'm to be supportive and admire her progress.

Aside from the new hobbies, the biggest cat MCO bonus is that any trip to the kitchen for tea or water involves petting and making sure interesting fridge food is properly distributed. Energetic Tic Tac is muscled like an Olympic athlete but Target now has a bum the size of a beaver's and Swooner is developing a tiger's belly pouch.

Seeing it, we humans put our heads together and decided to restrict treats and cat biscuit top-ups. After all these years I have no idea how we can still delude ourselves that we have any power in this house. However, we were totally firm, completely on board, united in our determination.

Hours after our announcement, Tic Tac got Tom to hand out early dinner and an hour later Swooner lied shamelessly to me that the one or two biscuits left in the bowls had been there since breakfast.

Yes, I fell for it. Just like Tom was persuaded that I had callously forgotten about treat time the very next day.

We are fighting back by checking in with each other constantly. Even that's still a bit hit and miss because Target has drive and determination not seen since the days of Atilla the Hun, Swooner is completely shameless, and Tic Tac has perfected a dramatic faint that would be get her a standing ovation in West End.

So, while we humans would like to go out and meet with friends again, the cats are enjoying the new normal. They waken us up at dawn, squeaking with excitement and they're in a continuous purr for the rest of the day. For cats, having everyone at home all the time is simply purr-fection. 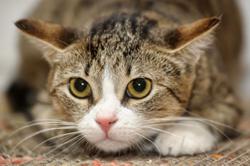 What You Should Be Feeding Your Pets