Grasse and her boyfriend are happy with their new puppy which they adopted from a rescue organisation, after their bad experience with scammers.

To say Taylor Grasse’s pursuit of the perfect puppy was a rough experience would be an understatement.

The Ohio, US resident is one of hundreds of dog lovers scammed every year by sophisticated websites that advertise puppies for sale.

Her boyfriend, Sean Dick, had found a link that offered French bulldog puppies for about half what they often sold for.

“We clicked on the link and examined the webpage, ” Grasse said. “It was put together wonderfully.”

Grasse, who lived in Coventry Township at the time, said the Texas-based site pulled all the right strings.

“They had a heartfelt story about why they started this business, ” she said. “They had pictures of people with their dogs.”

“I have always been obsessed with French bulldogs, ” she said. “(I) swore I would always have one.”

“After weighing the options, I was like, ‘I feel I can afford this’, ” said Grasse. “We sent them an email that we were interested.” 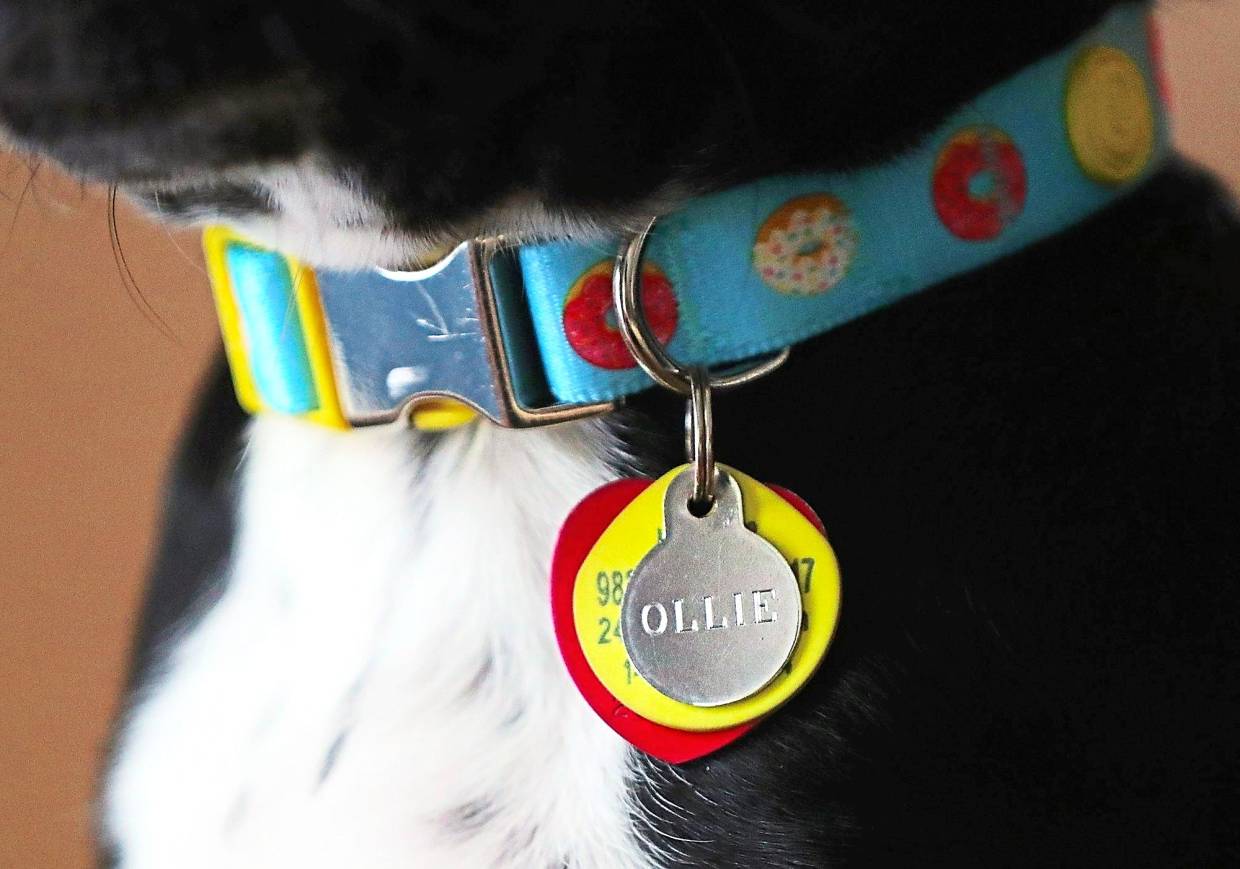 A brand new collar for Ollie, who was adopted by Grasse.

That connection started a process that included emails, photos of her puppy and a home address. The company used every trick in the book to exude legitimacy, and they convinced Grasse.

“We had about 10 emails back and forth, ” Grasse said. “They gave me three options on how to pay. One of the options was Google Pay.”

After 10 or so emails back and forth, Grasse came to an agreement with the company. She used Google Pay and verified it for the seller. She was told her puppy would arrive by plane on a Friday – the company had a special deal with an airline, they told her.

“That Wednesday, we went out and got all of the puppy stuff, ” Grasse said. She and her boyfriend were excited and eager for Friday to come.

By noon that day, she was worried. She tried to call the company, but there was no option to leave a voicemail.

“It was a weird recording, ” Grasse said. “That’s kind of when my heart started to sink.” 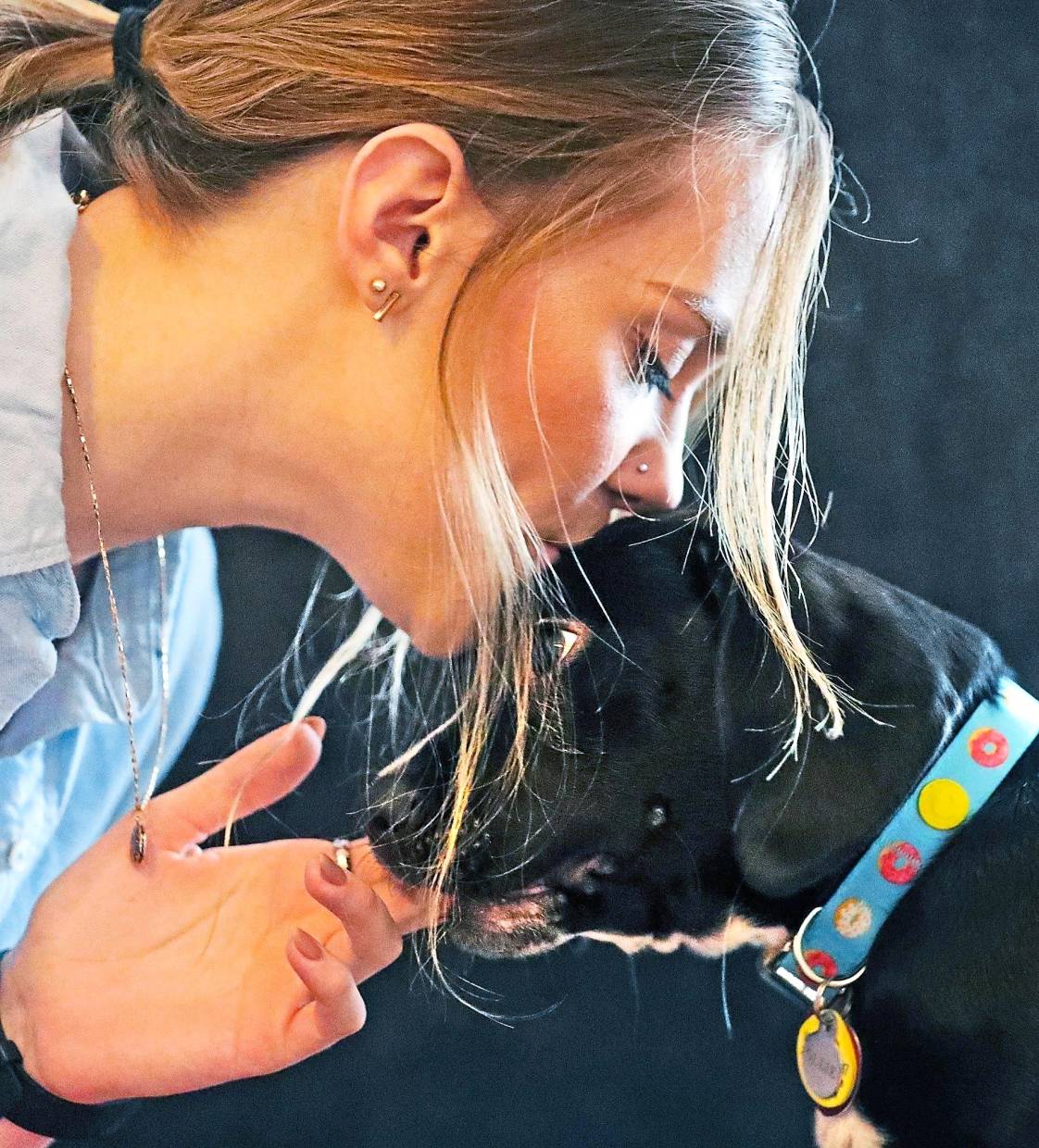 Grasse plants a kiss on Ollie, the new love of her life.Further efforts to retrieve her payment were unsuccessful. On Oct 4, she filed a complaint with the Better Business Bureau’s Scam Tracker. In it, she described her experience with the Texas scammer.

“They gave me a name and address and everything, ” she wrote in the complaint. “Told me I could come to their house. Even sent me a contract assuring the puppy’s health.”

But the loss was more than a hit to her pocketbook.

“I was depressed for quite some time, ” Grasse said.

She’s not alone, said Christy Page, president and CEO of the Better Business Bureau of Akron.

“It is very common throughout the country, ” Page said in a recent phone interview.

“A lot of times, they’re from overseas. It’s like Whac-A-Mole: You get one shut down and another pops up.”

Page said that up to 80% of sponsored ads about pets may be fake. The bureau’s Scam Tracker has more than 900 reports from individuals such as Grasse who thought they’d found their dream dog, but wound up with a dead-end phone call and a depleted bank account.

Despite her disappointment, Grasse’s story ends on a high note. She’s now the proud owner of a rescue dog named Ollie – and couldn’t be happier.

“We started looking into adoption agencies, ” she said. “I did get a puppy I’m so in love with.” – Tribune News Service/The Repository, Canton, Ohio/Alan Ashworth