Training therapy pups to bring comfort and joy to humans

Schoolteacher Evans with Harley Grace (left) and Charlie Brown, who are in the process of being trained to be therapy dogs.

When Julie Kirker’s chocolate Labrador named Bear retired from Paws of Grace, a therapy dog ministry that Kirker founded, she thought her time as a therapy dog handler was over.

Though Bear died more than 10 years ago, tears still come to Kirker’s mind when she thinks of her former companion and the joy he brought to those who met him.

In January, it became clear to Kirker that God had another plan for her when she met a white-and-brown Old English sheepdog mix.

She and her daughter, Stacey Evans, adopted two puppies and have been training them to become therapy dogs. The puppies, now about a year old, are working towards their therapy certification to bring comfort at schools, hospice, hospitals and nursing homes.

“I always say Jesus gave me a puppy because I never dreamed this would be something I would be doing again, ” Kirker said. “Everywhere we go, these dogs just bring joy to people.”

Driven to help others

Kirker first had the vision of using dogs to provide comfort and healing when she was studying at Kent State University in Ohio, the United States. She graduated with a degree in recreational therapy in 1996.

As a student, Kirker brought a large, stuffed golden retriever to class – after the professor forbade her to bring her own dog – as part of her final project on leisure education assistance dogs.

“The idea of using dogs or animals to help people was just something I was driven by, ” Kirker explained. “I had seen the encounters that people had with dogs, and how it comforted them and made them relax.”

It takes a special dog to pass therapy certification, Kirker said. There are two parts to therapy dog certification: behaviour and temperament.

When she first began her search for a dog to train, she envisioned a black female Lab. Her mind changed in an instant when she laid eyes on a male chocolate Lab, who was later named Bear.

Bear began his training in 2000 and received his certification at age two.

“It’s difficult because you want a puppy from each litter, but I just couldn’t find the right dog, ” Kirker said, adding it was “love at first sight” when she found Bear.

In 2007, Bear spent time at Pfeiffer Intermediate School as a way for Kirker’s daughter, who is a sixth grade teacher, to show administration the benefits of having a therapy dog in the classroom. Since then, Evans has had another dog, named Maggie, in her classroom with her for a number of years. 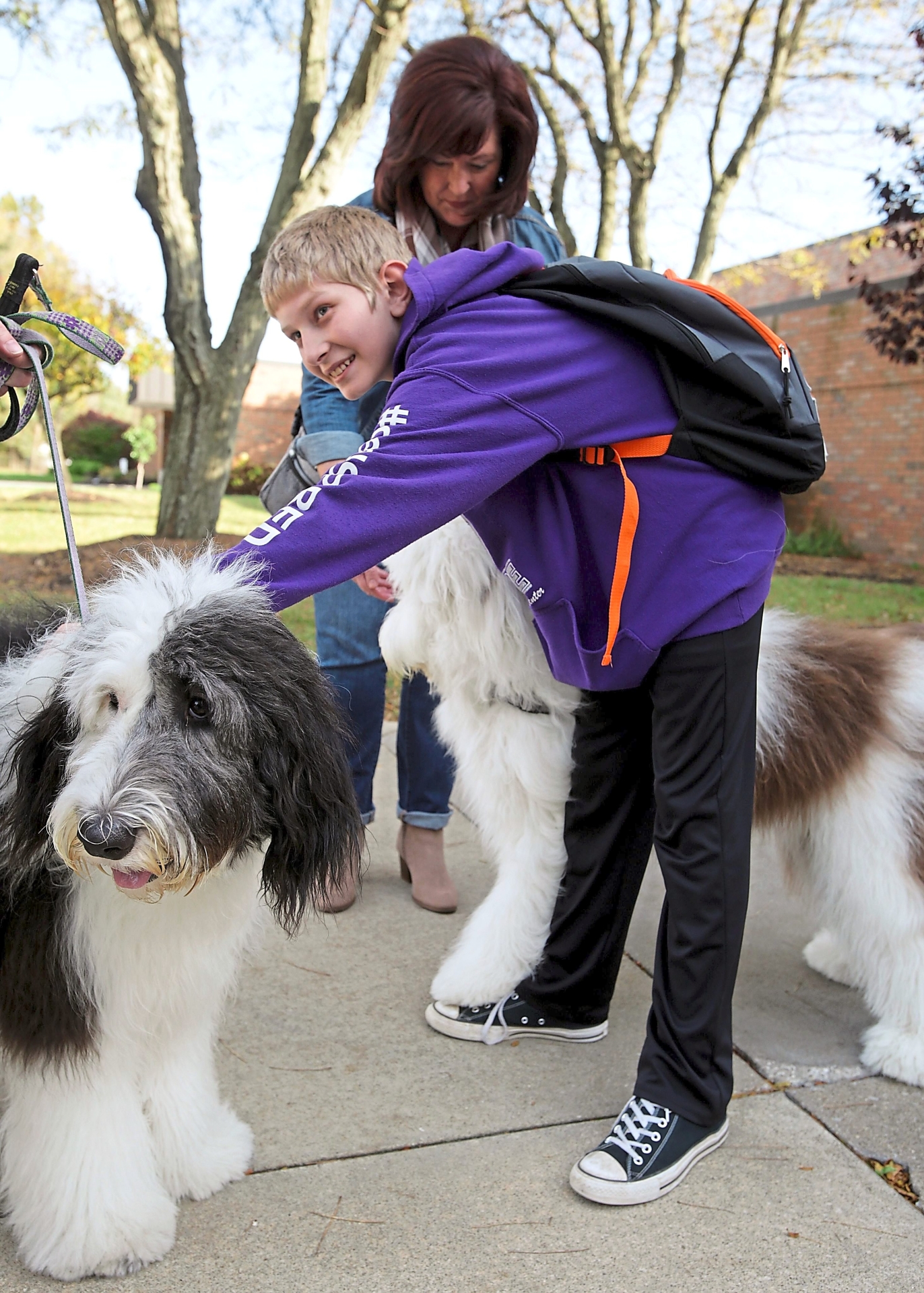 The Bernese Mountain Dog also visited schools in Louisville with Evans’ husband, who works for that district.

Maggie spent five years in the classroom before she died earlier this year.

With 17 years of experience in teaching, Evans has noticed a difference in the atmosphere of her classroom when a therapy dog is present, she said.

Sometime in the 2020-21 school year, Evans said, she hopes to bring in her new pup, Harley Grace.

Evans heard about a litter of puppies available for adoption through a co-worker.

She asked her mother to go with her to evaluate the poodles – Newfoundland and Old English sheepdog mixes – to see if any of them would be a good fit for therapy work.

After she chose her puppy, Kirker noticed another pup that sat patiently next to her during their visit with the puppies. Though the breeder told her the dog was not for sale, she tested him and told the breeder if she changed her mind to let her know.

Evans later received a message telling the mother and daughter the breeder had decided to part with the pup.

“I just knew I was supposed to get that little dog, ” Kirker said.

The puppies began their training in February and have passed the American Kennel Club S.T.A.R. Puppy Program, Kirker said. Evans (left) and her mother Kirker talk about the work it takes to train a therapy dog. Their dogs Harley Grace (left) and Charlie Brown are Newfoundland and Old English sheepdog mixes.

According to the AKC website, the programme focuses on four key pillars: socialisation, training, activity and responsibility.

The next step before therapy dog certification is to become a Canine Good Citizen through a 10-skill training programme, Kirker said. The puppies are training with Libby Smith at Cosmic K-9.

Evans’ Harley Grace will work with students in the classroom, including those having difficulty learning to read as well as special-needs students. Evans also hopes to get Harley Grace working with hospitals and eventually become a part of a crisis response team.

Kirker’s dog, Charlie Brown, will assist her at NewPoint church, where Kirker leads the Women of Light ministry.

Charlie Brown will provide comfort to victims of sex trafficking through Rahab Ministries and victims of violence through Mercy Medical Center’s Haven (Healing After Violent Encounters Network) programme and Aultman Hospital’s Serenity programme. She also hopes to get Charlie Brown involved with a crisis response team along with Harley Grace.

“The (dogs) are just joyful, ” Kirker said. “People really want to pet them. I never thought I would be doing this again. I thought this chapter was closed, but it’s not.

“It’s going to be awesome to see what these guys do.” – Tribune News Service / The Repository, Canton, Ohio / Samantha Ickes