Human Writes: Malaysia is 8th worst in the world for plastic waste 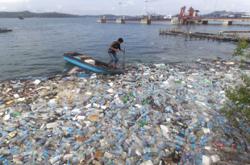 Plastic and glass waste lies on the ground after an event in San Sebastian, Spain. There is a global crisis in plastic waste and Malaysia is the eighth worst country worldwide for plastic waste. Photo: Reuters

That was the quiet plea made one evening by my 10-year-old son.

I was somewhat surprised. We avoid single-use plastics and always use our own shopping bags.

My children have long stopped using plastic straws, persuaded by a video of a turtle with a nose bloodied from a straw stuck right up its nostril.

Yet his concern was understandable and well-founded, and prompted me to write this column.

We have a huge problem with plastic waste on this planet. It’s everywhere. You’d have to be blind not to see it. Empty drink packets on the streets. Plastic bags and Styrofoam food packets in the park. Beaches that look like rubbish dumps, with waste strewn all over.

Apart from the fact that it is simply disgusting, displaying our careless disregard for the environment, the problem has wide repercussions – literally.

There is a global crisis in plastic waste. And we Malaysians – yes, us – are major contributors to it.

According to a 2015 study in Science Magazine, Malaysia is the eighth worst country worldwide for plastic waste.

The study, which named China, Indonesia and the Philippines as the top polluters, estimated Malaysia produced almost one million tonnes of mismanaged plastic waste (waste not recycled or properly disposed of) in 2010.

Some of our waste ends up in the oceans, poisoning and choking marine life and sea birds; some may become part of one of the big “islands” of accumulated plastic waste. The Great Pacific Garbage Patch is estimated to be bigger than the size of France. According to National Geographic magazine, scientists gathered 750,000 bits of plastic in 1sq km of that patch.

During the search for wreckage of the missing airliner MH370, investigators were constantly confounded by false leads that turned out to be junk.

There will soon be more plastic than fish in the sea, according to scientists. I wouldn’t be surprised if that’s already the case in our local seas.

A recent video of a diver in Bali swimming in a sea of trash provided shocking proof of the extent of regional marine trash. Last year, Bali declared a “garbage emergency”; the clean-up of beaches yielded 100 tonnes of rubbish on some days.

Earlier this month, some 500 people, led by Reef Check Malaysia, cleaned up 15 Malaysian beaches. On Pulau Tioman, this extended to all villages. Volunteers collected nearly 14,000 plastic bottles, 6,200 plastic bags and 1,700 straws from the effort.

Plastic waste is not just an eyesore; there’s a far more menacing consequence.

Plastic doesn’t really degrade. It could be there for hundreds of years. And if it does degrade, it breaks down to microscopic particles that may then be ingested by fish, which we then eat, along with any pollutants absorbed by that plastic. In short, there is serious bad karma from plastic – everything that we waste eventually comes back to us, sometimes right in our mouths. And yes, some of this stuff is poisonous.

Given such facts, it’s shocking that there was a pledge recently in a political party manifesto for free plastic bags in Selangor. We need radical solutions to curb plastic use rather than allow free, unrestricted use!

It may be inconceivable for us to imagine life without plastic bags, but in fact, some countries – including several in Africa – have banned plastic bags entirely, or almost entirely.

Bangladesh instituted a ban in 2002 after it was found that major floods were caused by plastic bag litter caught in waterways and the sewerage system. Mauritania banned plastic bags because cattle were getting sick from eating them.

Many other governments have taken action to reduce single-use plastic bags. In many western European countries, there is a charge for bags, which has led to consumers bringing their own bags. Some German shops only sell reusable bags.

Bags, though, are just a part of the problem. Ultimately, we need to tackle the enormous problem of plastic waste. That’s a huge, complicated business requiring change on many levels of societies (including consumers) – something for another column.

Yet I should add this: Change is possible, as seen in some European countries.

In Germany, some 98.5% of refillable plastic bottles are collected for recycling or re-use. Glass beer bottles are also re-used. How do they manage that? A little financial incentive helps: a Pfand (deposit money) is added to the bottle price, which you get back when you return the bottle to the shop. It’s just 25 cents (about RM1) per plastic bottle, but alongside a general consciousness about recycling, that’s enough to ensure a habit.

With the escalating amount of waste generated in urban areas, we need to come up with such solutions soon. In the meantime, we can consider what we as individuals can do. So please, let’s waste less plastic.

Human Writes: Malaysia is 8th worst in the world for plastic waste