By TAN CHENG LI
Obtaining financing for the RM84mil solar farm was challenging for Datuk Guntor.

Country’s latest solar farm one of the most resource-efficient in the world.

Glinting glass panels that harness sunlight and convert it into energy is an increasingly common sight as Malaysia charts a path towards renewable energy. A field of these solar cells recently emerged in Malacca’s newly developed state administrative centre of Hang Tuah Jaya in Ayer Keroh.

The panels, all 29,092 of them, form the latest solar farm in the country and generate enough energy to power 1,800 houses every day. The 8MW facility, called Kompleks Hijau Solar, is developed and operated by renewable energy company Gading Kencana.

Company managing director Datuk Guntor Tobeng says aside from generating renewable energy, the solar farm supports Malacca’s goal to be a green state. It started feeding solar power into the national grid in mid-December. Under the Feed-in Tariff (FiT) scheme, the company will be paid 80sen per kilowatt hour of electricity. It received its first payment of RM900,000 last month. 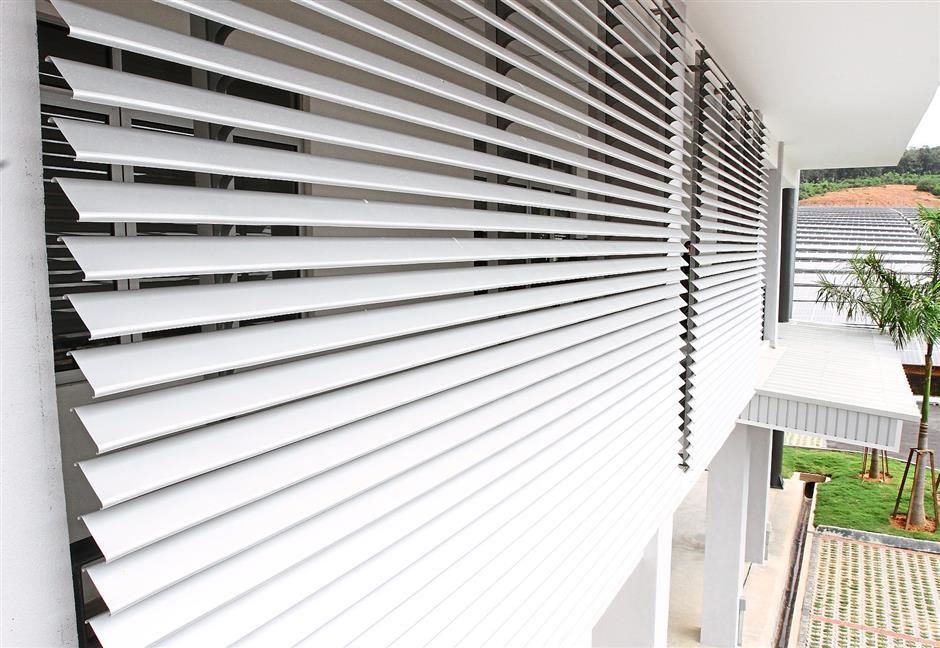 A green feature of the site building — louvres which shade it from the heat but allow natural light to penetrate through.

Launched in late 2011, the FiT scheme enables companies and house-owners to produce renewable energy from four sources – solar photovoltaic, biogas (from organic waste, landfill and sewage sludge), biomass (agricultural waste and garbage) and small hydropower – and sell it to the grid.

Gading Kencana has been involved in solar street lighting, solar hybrid systems in rural areas, energy audits and installation of residential and industrial solar photovoltaic (PV) systems. Its projects include a 2MW rooftop PV system for PEPS-JV Malaysia in Batang Kali, Selangor, and a 546kW rooftop PV system for Bosch in Penang.

Guntor says its new solar farm can generate 10,120MWh of electricity annually and is projected to generate RM8mil annually. It will avoid carbon emissions amounting to 136,700 tonnes over 21 years (the duration of the FiT scheme). “This is equivalent to what is emitted by 30 jets flying every day from KL to London and back, for five and a half years.”

He says the solar farm is deemed to be one of the most resource-efficient in the world, as it produces 1MW per 0.6ha (1.5 acres) against the worldwide norm of 1MW per 2ha (5 acres). This impressive yield emerged from a setback – the actual land area turned out to be smaller than on paper. Guntor had purchased 7.06ha (17.66 acres) of land but in reality it was only 6.86ha (17.17 acres). 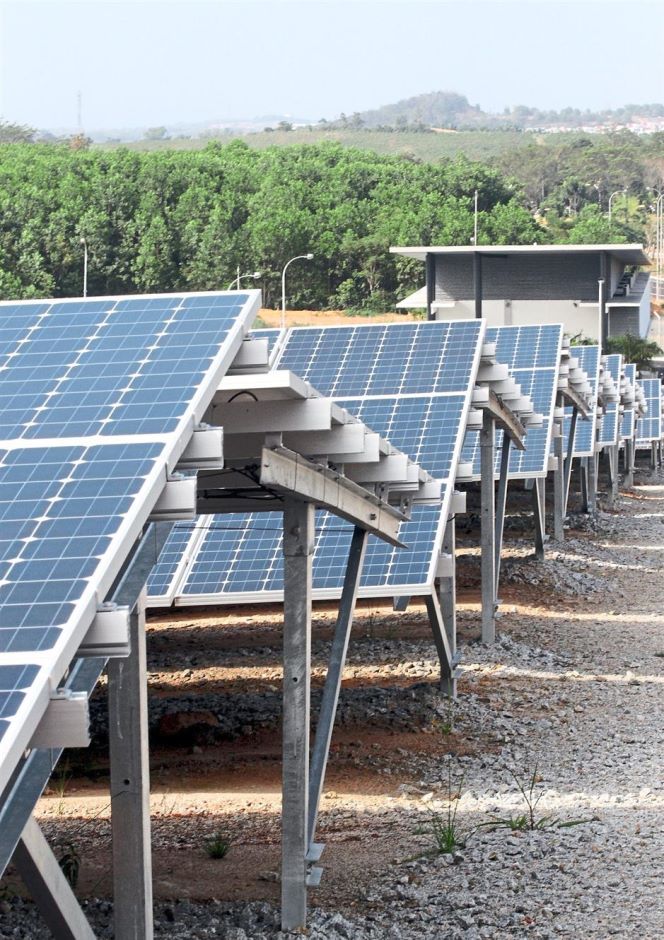 The solar panels are mounted to resemble a pitched roof to tap maximum sunlight.

He had not checked the site, a rubber tree plantation, as there was no access road and was only shown a contour map. When he finally viewed the site, he had another surprise – it was mostly a valley, 30m deep.

“Because of the shortfall in the land area, we had to rethink the whole design. We had already applied to SEDA (Sustainable Energy Development Authority) for a 8MW facility, so we had to figure out how to fit 8MW of panels into a smaller land area,” said Guntor.

His team eventually filled up the valley with some 300,000 cu m of earth. To fit the smaller site, the panels have to be mounted close together but this raises the risk of shading.

To counter this, they landscaped the site to create six slopes in different directions. The team studied 30 different orientations to obtain the right tilts for the panels. This explains why the panels do not face the same direction as seen in most solar farms. Instead, two rows of panels are installed at an angle to each other, resembling a pitched roof. This A-shaped mounting enables maximum tapping of sunlight.

The land contouring also enables runoffs to flow into the on-site detention pond, instead of collecting and eroding the site. Guntor’s team also studied wind directions and positioned the panels in a way that ensures good ventilation, to reduce heat build-up in the panels which can lessen their efficiency.

The solar farm might have a green edge but Guntor still faced difficulties obtaining financing for the RM84mil project. “We spent a year talking to many banks and all rejected us. They said we did not qualify for a large loan.” He eventually got a facilitation fund of RM11.8mil from Teraju (the Government’s Bumiputra Agenda Steering Unit) and a RM56mil loan from SME Bank (Small Medium Enterprise Development Bank). 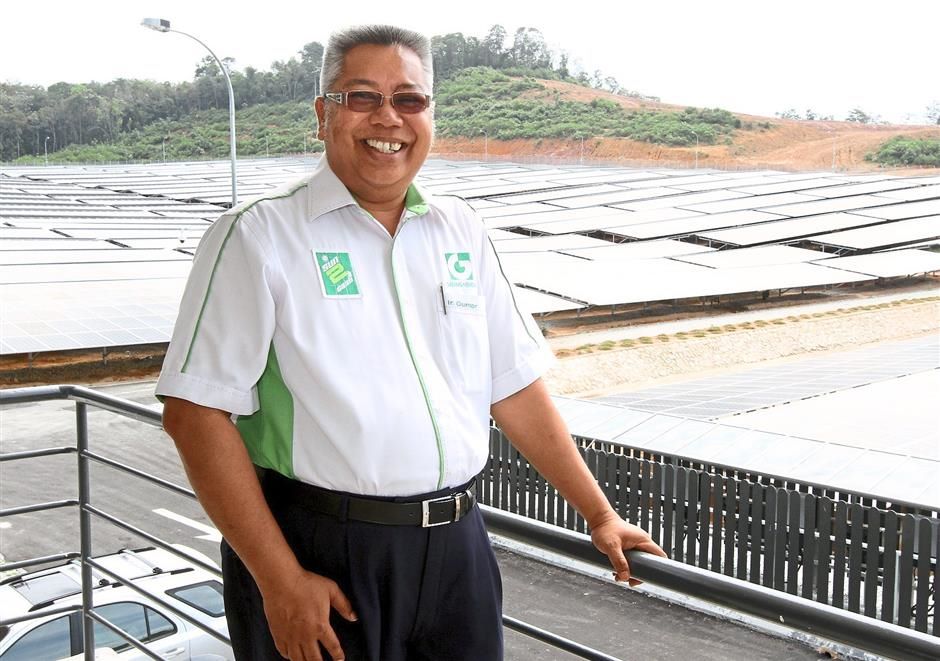 Obtaining financing for the RM84mil solar farm was challenging for Datuk Guntor.

As Hang Tuah Jaya is a gazetted green zone, all buildings there must be certified under the Green Building Index. The site building at the solar farm managed to obtain a GBI platinum rating by incorporating green building features such as water-saving fittings, harvesting rainwater and passive cooling through building orientation and design as well as the use of shading louvres. There are also rooftop solar cells to generate solar power for use in the building.

The area is reserved for “institutional development” but there is concern that future neighbouring development might shade the panels. To prevent this, the company has submitted a request to the Town and Country Planning Department, asking for a 50m setback for high-rises.

Solar photovoltaics currently contribute 67% of the 270MW of renewable energy generated in the country currently. Some large PV installations which are boosting the local power supply with solar energy are: Amcorp Properties’ 10.25MW solar farm in Gemas, Negri Sembilan; Cypark Resources’ 8MW farm on a closed landfill in Pajam, Negri Sembilan; Sunedison’s 5MW farm in Sepang, 4MW on the KLIA rooftop and 10MW on a parking canopy near KLIA2; and Kumpulan Melaka’s 5MW farm in Alor Gajah.

Droughts and rising seas put Cuba’s agriculture under threat
What is 'carchitecture' or the art of including the car in the interior design?
Climate crisis: There is no Planet B
How to safely dispose of your old e-bike battery
Saving Malaysia's songbirds – the straw-headed bulbul and white-rumped sharma
COP27: The climate summit flinched on phasing out all fossil fuels
In Cape Verde, ocean waste is being turned into bags and bracelets
Consumption, not crowd, is key to climate change
This design incubator programme energises Malaysia’s timber and furniture sector
Malaysians wear saree and finish 5km charity run in Penang