Beginner on a bicycle

I AM not one of those fortunate kids that grew up cycling in the neighborhood because I never owned a bicycle as a child. Hence, I never discovered the joys of cycling till last year, when my husband bought his first folding bike and taught me how to cycle. I guess all those hip-hop and jazz dance, and body combat classes must have somehow helped – either that or my husband is an extremely skilled instructor because I managed to learn in five minutes – and without ending up in the longkang too! 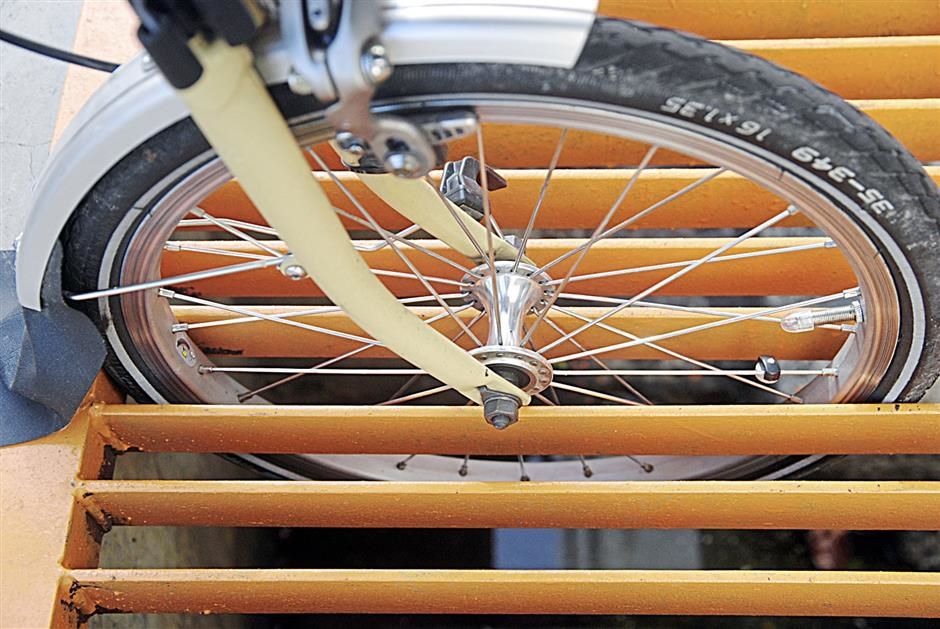 Look out for hazardous drain gratings. Local councils should install these at 90° to the direction of travel.

His instructions were to get on the bike, make sure the seat is adjusted properly so that my feet could at least touch the ground, push off with one foot, and start pedaling with the other foot. Steer straight and don’t look down or you’ll be wobbling from side-to-side. If you feel like you’re going to fall, balance yourself by using the handlebars to steer in the direction opposite to the fall.

Later, while on holiday overseas, we bought our second foldie. Since then, I’ve been accompanying hubby and other cyclist friends on cycling trips to places like Sekinchan (in Selangor, to view the paddy fields), Chenderiang (in Perak, for a dip in the waterfalls) as well as to the Publika shopping mall (which has Wheelie Sundays for cyclists) and Putrajaya (around the lakeside). Despite busy work schedules, we try to go on a cycling outing together at least once a month during the weekends.

Like every other sport, cycling too has its own risks, so it’s good to be aware and take the necessary precautions.

My first time falling was on the way back from a cycling trip to Serendah. We were cycling along kampung roads and came across a patch of mud. It looked dry so I cycled across it. Besides, everyone else in front had just gone over it without any mishap.

Unfortunately, perhaps my wheels hit a part that was still slightly wet (and deeper). The bike skidded and turned turtle. I fell on my left side. My left leg and arm were scraped pretty badly on the tarmac road and bleeding profusely. My husband who was cycling behind me helped me up.

Subsequently, a foreign worker from Bangladesh, who was passing by on his way to work, stopped to help. He kindly offered me bottled water to wash the wounds.

We were in the middle of nowhere on a kampung road. There were no other vehicles. Finally, after checking to make sure nothing was broken and that the bike was OK, I got on gingerly. The pain was agonising, but I forced myself to pedal slowly to the main road where the other cyclists were waiting. We took shelter at a nearby food stall and one of the cyclist friends applied an antiseptic lotion onto my open wounds.

I was still in a state of semi-shock, and did not feel anything at that point of time. The next day, when I woke up, I could not move. My bruises were so sore that even trying to get out of bed was agony. In the end, my husband had to roll me onto my side and pull me up by my arms, just so that I could get out of bed.

My second fall was really a fluke accident. I was cycling in an area with cycling lanes and hardly any cars around, except for parked ones.

So what went wrong? While there is nothing wrong with borrowing a bicycle, I was riding one that was not really built to suit my frame. It was made for a guy and a tall one at that. Even when I had adjusted the seat to its lowest point, my feet could still hardly touch the ground. Yes, apparently, I was vertically-challenged on that bike, even with my (average Asian female height) of 1.62m.

Taking for granted that it was in an enclosed area and there weren’t really any vehicles whizzing past, I decided to take my borrowed bike on a test run. What I did not expect was that the driver of a parked car (also not expecting anybody to be cycling around) would suddenly decide to move.

I swerved to avoid him. Ordinarily, this would not be a problem. Unfortunately, being on an unfamiliar and very much heavier bike, and one where my feet could hardly touch the ground, the bike skidded and I ended up on the floor. What was worse, the heavy bike landed on me!

Everyone, including a nearby security guard came running to check if I was OK. There were fewer surface wounds this time, as the cycling track was not as hard as a tarmac road. I hobbled back to where my group of friends was waiting, and later, my husband came to fetch me back. I was sent to the clinic for a check up. The next day, the pain was unbearable, and I could hardly walk, bend, or even move.

My husband sent me to the hospital for an X-ray. The radiologist said that there were some “irregularities” and recommended a CT-scan. I had to return the next day for the results. When I received the results, I did not know whether to be happy or sad.

The good news was that it was not a fracture. The bad news was that it was a minor slipped disc. Bending, squatting and carrying heavy stuff would be difficult and not advisable, and the hardcore sports that I enjoyed were out of the question ... at least for the moment. So said my doctor.

Well, it has been more than six months, and I’m happy to say that I’m on the way to recovery and have returned to cycling.

What did I learn from these experience? We can’t really control external circumstances, so, as far as possible, prevention is better than cure. 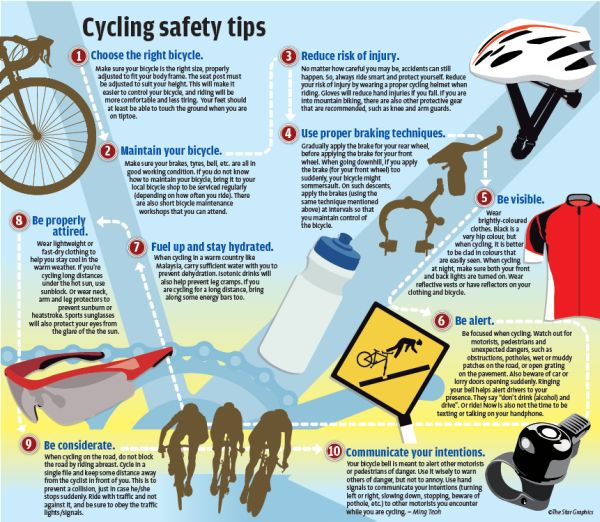 Beginner on a bicycle