Megacities like Kuala Lumpur are prone to increased temperatures due to the UHI effect. — IZZRAFIQ ALIAS/The Star

On Apr 5 (2022), the United Nations (UN) Secretary-General described the latest report of the Intergovernmental Panel on Climate Change (IPCC) as “a litany of broken climate promises” and reminded the world that it is “on a fast track to climate disaster”.

The Malaysian government has not been providing much information about the effects of climate change in the country.

As such, one has to turn to international organisations that have collected and collated such material.

The data in this column have been culled from the World Bank and Asian Development Bank’s 2021 publication Climate Risk Country Profile – Malaysia and the UN’s 2021 publication Disaster Risk Reduction in Malaysia: 2020 Status Report.

According the banks’ report, “Between 1970-2013, Peninsular Malaysia, Sabah and Sarawak experienced surface mean temperature increases of 0.14-0.25°C per decade.

It is projected that the frequency and intensity of heat waves experienced will increase significantly due to the warming climate.

ALSO READ: When it gets too hot for health

The banks reported that a 2015 study of rainfall trends on the east coast of Peninsular Malaysia between 1970 to 2010 observed a significant increase in annual rainfall, as well as during the monsoon period.

It also found an increase in the number of days classified as heavy rainfall (i.e. days with rainfall more than 20 millimetres).

The UN-reported research found that the maximum annual rainfall intensity has increased substantially, i.e. “the one-hour, three-hour and six-hour periods of rain between 2000 and 2007 have risen by 17%, 29% and 31%, respectively, compared with the period of 1970-1980”.

Malaysia is particularly vulnerable to flooding, with the frequency and extremity of flood events having increased in recent decades.

Residents in the Klang Valley may recall the severe floods that occurred over the past two years, compared to yesteryears when floods were uncommon.

The UN research also found that about 29,800 square kilometres of land – within which five million people reside – feels the brunt of annual floods.

It warned that the area affected is projected to increase due to rising sea levels – possibly reaching 0.25 to 0.5 metres higher by 2100 in Peninsular Malaysia and potentially exceeding 1.06m in Sabah.

The banks’ reported research suggests that the average (median) increase in the population affected by an extreme river flood (90th percentile) by 2035-2044 as a result of climate change is approximately 102,290 people.

According to the banks, the intensity of tropical storms in South-East Asia is projected to increase due to climate change.

“This is likely to impact the frequency and intensity of storm surge events Malaysia experiences.

“Work by Dasgupta et al assesses the potential increase in a one-in-100-years storm surge zone under one meter of sea-level rise (the upper end of projected rises by the end of the 21st century), suggesting an increase in the impact area of around 24% and an increase in the population affected of around 34%.” 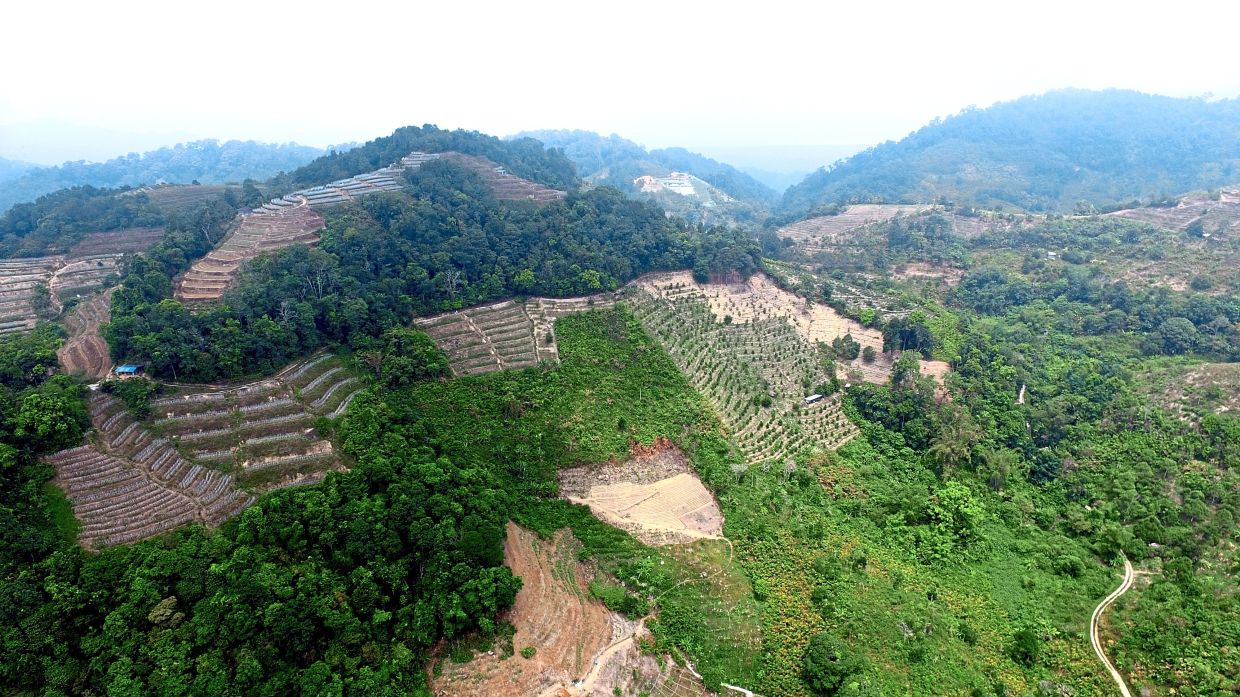 From 2001 to 2021, Malaysia lost 29% of its tree cover, which could lead to consequences such as accelerated climate change, global warming, soil erosion and flooding. — Se Vena Networks

Anyone on a flight from Sabah or Sarawak to the Peninsula cannot but be saddened by sights of large tracts of deforestation.

According to Global Forest Watch, “From 2002 to 2021, Malaysia lost 2.77 Mha (million hectares) of humid primary forest, making up 33% of its total tree cover loss in the same time period.

“Total area of humid primary forest in Malaysia decreased by 17% in this time period.

The banks reported a study that assessed the “historical sea-level rise over the period 1993–2015 at around 3.3mm per year east of Malaysia, and around 5.0mm per year west of Malaysia”.

According to the banks, “Rising sea levels are predicted to have significant negative impacts for Malaysia’s coastal zone, with the most impact felt in the east coast.

“Some suggest by 2040, potentially all of Malaysia’s mangrove zone could become submerged, and by 2060, sea-level rise might impact the country’s industrial zones.

“Under one meter of sea-level rise, around 7,000 km square of coastal land would be at risk.

“Approximately six percent of palm oil production and four percent of rubber production is currently at risk from sea-level rise.”

The direct effects include alterations to carbon dioxide availability, precipitation and temperatures.

The indirect effects include impacts on water availability and seasonality; soil organic matter and erosion; changes in pest and disease profiles; new invasive species; and decline in arable areas due to the submergence of coastal areas.

According to the banks, “Modelling suggests that occurrence of droughts and floods early in the rice growing season could reduce yields by up to 60%.

“Drought conditions may result in an inability to cultivate rubber, palm oil and cocoa.” 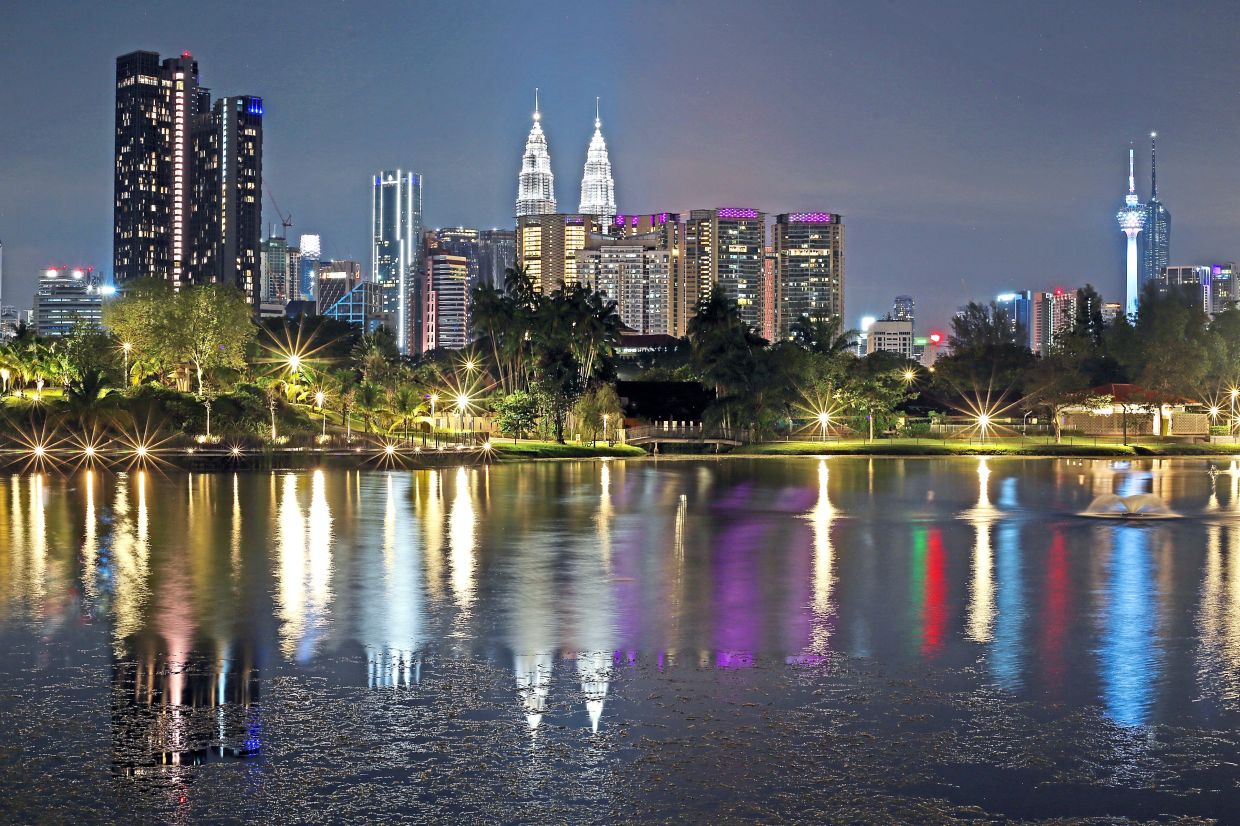 Megacities like Kuala Lumpur are prone to increased temperatures due to the UHI effect. — IZZRAFIQ ALIAS/The Star

There is a relationship between heat stress and labour productivity, household consumption patterns, and living standards.

This is compounded by the Urban Heat Island (UHI) situation in which dark surfaces, residential and industrial sources of heat, an absence of vegetation, and air pollution, can increase temperatures higher, compared to rural surroundings.

This is commonly anywhere in the range of 0.1-3°C in megacities.

UHI in the range of 4-6°C has been recorded in Kuala Lumpur, typically peaking at night time.

This impacts directly on human health and labour productivity.

In addition, research suggests that a one-degree increase in ambient temperature can result in an average 0.5–8.5% increase in electricity demand, with its consequential impact on climate change.

The effects of climate change are already impacting Malaysia.

It would be myopic thinking for any quarter to claim otherwise.

It was reported on June 21 (2022) that the Malaysia Climate Change Action Council has announced actions to prepare for climate change.

In order for the public to be better able to play their part in climate change adaptations, we have to be informed about the effects of climate change in Malaysia.

Disclosure of such information is necessary.