Is there really a 'best' Covid-19 vaccine?

At the end of the day, the best vaccine is the one in your body, so do accept whichever Covid-19 vaccine you are allocated. — FAIHAN GHANI/The Star

There is extensive community spread of Covid-19.

Despite the Emergency and the movement control order, Malaysia continues to climb the global Covid-19 league.

At its current trajectory, the number of reported positive cases will reach one million within a few weeks.

As of July 12 (2021), Malaysia had the highest newly-confirmed cases and the highest daily number of deaths per million population among the Asean countries.

The actual number of positive cases is more than that reported by the Health Ministry.

Based on the experience of other countries, it has been estimated that the actual number of cases is between four to 10 times the number of reported cases.

This means that everyone is at risk of getting infected.

The hope is that vaccination will help in getting some control over the spread of Covid-19.

We have these three

There are three vaccines currently available in Malaysia: those produced by Pfizer/BioNTech, AstraZeneca/Oxford and Sinovac.

The Pfizer/BioNTech vaccine (called Comirnaty) delivers a piece of mRNA (messenger ribonucleic acid) that gives the body instructions on how to make the spike protein of the SARS-CoV-2 virus, which causes Covid-19.

The spike proteins stimulate the body’s immune response, producing antibodies and developing memory cells that will recognise and respond if there is an infection by the actual virus.

The AstraZeneca/Oxford vaccine (called Vaxzevria or Covishield) contains a modified version of a harmless adenovirus, which carries the DNA (deoxyribonucleic acid) sequence that codes for the spike protein of the SARS-CoV-2 virus.

In the body, the DNA provides instructions (via the body’s own mRNA) on how to make the spike protein, which then stimulates antibody and memory cell production to protect against an actual infection.

The Sinovac vaccine (called CoronaVac) contains the whole cultured SARS-CoV-2 virus, which has been killed to destroy any disease- producing capability.

Such inactivated vaccines have long been used in vaccination programmes and often need to be given in multiple doses, with a booster dose to help maintain immunity.

The pace of vaccination is being ramped up with more vaccines due to arrive this month (July 2021).

This article addresses a question that has been raised by many, i.e. which vaccine is the best?

The phase III clinical trials for each of these vaccines, involving tens of thousands of subjects, compared the number of Covid-19 cases in those who were vaccinated with those who were not.

This provided a measure of how well the vaccine worked, i.e. the vaccine’s efficacy under the stringent controlled conditions of the clinical trials.

It is difficult to compare the phase III trials for each of the vaccines directly with one another because they were carried out at different locations and times.

There were differences in the local community’s infection rates, the public health measures undertaken in the various locations then, and the presence (or absence) of the various SARS-CoV-2 viral variants.

Moreover, the trials’ subjects had variables like age, ethnicity and underlying medical conditions, in some instances.

In such clinical trials, the population studied and other factors have to be the same or similar enough such that any differences in outcome can be attributed to the differences in the vaccines alone.

There is currently a head-to-head trial in the United Kingdom comparing the AstraZeneca/Oxford and Valneva (called VLA2001) vaccines, with the phase III trials expected to be completed later this year.

The latter is currently the only inactivated and adjuvanted whole- virus Covid-19 candidate vaccine.

Until there are results from more head-to-head studies, there is much information about the effectiveness (not efficacy) of the vaccines in the real world, i.e. local communities.

The effectiveness of the vaccines can be compared in countries that have rolled out different vaccines.

Israel has one of the highest global vaccination rates, with 72% of its population aged 16 years and above fully vaccinated with two doses of the Pfizer/BioNTech vaccine as of April 3 (2021).

The overall vaccine effectiveness at seven days or longer after the second dose was 95.3%. Specifically, it was:

Public Health England (PHE) reported that as of July 4 (2021), 45.5% of their population had received the second dose, and 61.1% the first dose, of either the Pfizer/BioNTech or AstraZeneca/Oxford vaccines.

Several studies in the United Kingdom reported one dose of either vaccine was 55-70% effective against symptomatic Covid-19, which increased to 65-90% after the second dose.

The effectiveness against hospitalisation was 75-85% after one dose of either vaccine.

The effectiveness against death was 70-85% after a single dose of either vaccine; and after a second dose, 95-99% with the Pfizer/BioNTech vaccine and 75-99% with the AstraZeneca/Oxford vaccine.

There was evidence that the vaccines were effective at protecting against infection and spread of Covid-19 as well.

A Chilean study of the Sinovac vaccine from Feb 2 to May 1 (2021), included approximately 10.2 million persons.

The emergence of viral variants has added another dimension to the vaccines’ efficacy and effectiveness.

There are four variants of concern with the Delta variant becoming more dominant globally.

Its transmission rate was reported to be 60% more than the Alpha variant.

PHE reported that the Pfizer/BioNTech vaccine was more than 90% effective against hospitalisation and death from the Alpha and Beta variants.

The AstraZeneca/Oxford vaccine had 86% effectiveness against hospitalisation from the Alpha variant.

Meanwhile, a Scottish study reported that the Pfizer/BioNTech and AstraZeneca/Oxford vaccines were effective in reducing the risk of infection and hospitalisation in those with the Delta variant, but the effects on infection appeared to be diminished when compared to those with the Alpha variant.

There were insufficient numbers of hospital admissions to compare between both vaccines in this respect.

The AstraZeneca/Oxford vaccine appeared less effective than the Pfizer/BioNTech vaccine in preventing SARS-CoV-2 infection in those with the Delta variant.

In an analysis of 14,019 cases of the Delta variant, PHE reported that two doses of the Pfizer/BioNTech and AstraZeneca/Oxford vaccines were 96% and 92% effective respectively against hospitalisation.

There is no published data about the effectiveness of Sinovac against the variants, especially the Delta one.

It has been reported that health officials from Indonesia, Thailand and the Middle East have offered booster doses to those already vaccinated with the Sinovac vaccine, and in some instances, the AstraZeneca/Oxford vaccine.

The more affluent countries had the foresight to sign contracts for candidate vaccines in advance more than a year ago.

Malaysia did not do so, hence the supply issue encountered in the past few months.

However, it appears that vaccine supply will be an issue of the past soon.

It is reasonable to want the “best” vaccine available.

However, one has to consider the current circumstances of vaccine availability.

The best vaccine is the one in your body.

This is because all vaccines substantially reduce the risk of severe disease and hospitalisation.

The more people get vaccinated, the more the community is protected, thereby curtailing the spread of Covid-19.

It is crucial that vaccination rates run ahead of the spread of the viral variants.

The effectiveness of two doses against the variants shows that it is crucial to get the second jab.

As the Covid-19 vaccines are not 100% protective, it is important to continue – even after being fully vaccinated – with non-pharmaceutical interventions, i.e.:

Dr Milton Lum is a past president of the Federation of Private Medical Practitioners Associations and the Malaysian Medical Association. For more information, email starhealth @thestar.com.my. The views expressed do not represent that of organisations that the writer is associated with. The information provided is for educational and communication purposes only and it should not be construed as personal medical advice. Information published in this article is not intended to replace, supplant or augment a consultation with a health professional regarding the reader’s own medical care. The Star disclaims all responsibility for any losses, damage to property or personal injury suffered directly or indirectly from reliance on such information. 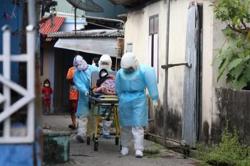