Tell Me About: Potential Covid-19 drugs chloroquine and remdesivir

An IHU Mediterranee Infection Institute staff member in Marseille, France, shows strips of chloroquine (left) and hydroxychloroquine tablets, which are both being tested for Covid-19 treatment. — AFP

I read about chloroquine. Is it really a possible treatment for the coronavirus?

Yes, it is possible. In fact, the World Health Organization (WHO) has launched a large global clinical trial called Solidarity, which Malaysia is a part of.

This trial will attempt to find out if the combinations of these promising old and new drugs can treat Covid-19:

As there are so many Covid-19 patients worldwide these days, many of them can participate.

The trial is designed to be flexible and can include new compounds at any time.

Tell me about chloroquine.

Chloroquine is an extremely old drug. It was discovered in 1934, and is still used to treat malaria.

It is a derivative of quinine, which was isolated in 1820 from the bark of the cinchona tree.

This tree is found in South America and was used to treat fevers.

Today, it is still used in many malaria-endemic areas – including certain parts of Malaysia – against the parasites that cause malaria, Plasmodium vivax, Plasmodium ovale and Plasmodium malariae.

However, it is not generally effective in treating infections of another parasite Plasmodium falciparum, which causes a particularly severe form of malaria, any more.

This is because there is now widespread resistance of this parasite to chloroquine.

It is important to note that chloroquine has an extremely long half-life, meaning that it can last in the body for a long time.

It is only given by mouth once a week for the prevention of malaria, and should only be prescribed by a doctor.

I was scared when I heard about the man who took chloroquine and died, while his wife become very sick. What happened to them?

This American couple actually took a version of chloroquine that is only meant to treat aquarium fish for certain diseases.

This treatment for fish is not approved by the US Food and Drug Administration (FDA), by the way.

They did not consult a doctor before taking it and probably didn’t know how toxic it could be.

As mentioned earlier, chloroquine (the type meant for humans) is only supposed to be taken once a week for the prevention of malaria, if you are travelling to an endemic area.

Many travellers who go into rainforests and such places take it as prophylaxis (prevention).

The dosage for an adult to prevent malaria is 300mg base (500mg salt).

If you actually have malaria, then the dosage will vary.

For acute malaria, the doctor will prescribe one dose immediately.

This is followed by half a dose six to eight hours later, and half a dose once a day for the next two days.

More severe side effects include:

Death can occur if you overdose and don’t get to a hospital on time.

Remdesivir is an antiviral drug originally developed to fight the Ebola and Marburg viruses.

It inhibits a key RNA (ribonucleic acid) enzyme in a virus and shuts down its replication.

Therefore, the very first Covid-19 patient diagnosed in the United States was given remdesivir when he got very ill, simply because they had to test it out.

He improved the next day.

They then tried it on a very sick Californian Covid-19 patient, and he also improved.

This led the American scientists to believe that of all the potential drugs, remdesivir is the most promising for the treatment of Covid-19.

Unlike chloroquine, it can be given in high doses without toxicity. 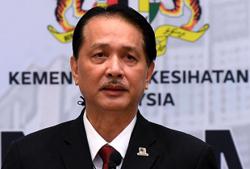 Chileans urged to adhere to health measures during national holidays