Most smokers want to quit, but don't know how

Smokers are used to being told the dangers of smoking, but have far less information on how to actually quit. — Filepic

As we stare at the increasing death rates from Covid-19, it is worth reminding ourselves that tobacco remains a bigger killer with more than eight million people dying as a consequence of both direct and secondhand smoke.

Half of all smokers die as a consequence of their addiction.

Malaysia alone has more than five million smokers, with more than 20,000 deaths a year related to tobacco use.

This year’s World No Tobacco Day, commemorated on May 31, has the theme and global campaign of “Commit to Quit”.

This is a reminder of the importance of providing the necessary support to tobacco users to become free of their addiction, and thus, help save their lives.

After all, the majority of smokers want to quit, but have difficulty doing so for biopsychosocial reasons.

Quitting is even more pertinent now as smoking impairs lung function to the point that it hinders the body’s ability to fight off infections such as Covid-19.

This is on top of the well-documented role of tobacco in non-communicable diseases such as cardiovascular disease, lung diseases and various cancers (involving the mouth, lung, throat, bladder, kidney, stomach, liver and cervix), which create significant health and financial burdens on both individuals and the national healthcare service.

The benefits of quitting are not limited to just the smoker, as many non-smoking women and children are unfortunately subjected to involuntary smoke exposure.

Smokers are used to being told the dangers of smoking – it is literally facing them in the form of garish photographs on cigarette boxes – but have far less information on how to quit.

The United Kingdom’s Royal College of Physicians (RCP) recently published Smoking and Health 2021: A Coming of Age for Tobacco Control, which reviews the UK’s efforts in reducing smoking and gives recommendations for a National Tobacco Control Plan.

These include an “opt-out” quit smoking service to all smokers at any point in contact with the healthcare service and pregnant women being given financial incentives to quit smoking.

Not an easy task

As most smokers will tell you, quitting smoking is not easy.

Many smokers attempt to quit multiple times before succeeding.

This is primarily because of nicotine – it is a chemical that stimulates the production of dopamine and is highly addictive.

As time goes by, the body begins to get used to its presence, but the smoker will gradually require more and more nicotine to obtain the same feel-good factor.

I have had patients who feel pressured to smoke because the boss does so in his office (it is almost always a he, and not a she), and there are many others who resort to smoking in order to relieve stress.

Assisting an individual to quit smoking should be done using an evidence-based approach, i.e. based on solid scientific data and not sentiment.

This would include the use of psychotherapy, alongside medication such as nicotine-replacement therapy, over a set period of time that will allow individuals to wean off their dependence on these “death sticks”.

There are other methods to help quit, including:

There is some clamouring for increasing the use of electronic cigarettes as a way to help smokers quit, despite the lack of evidence of its efficacy to help individuals completely quit smoking.

Even more worrying, there is increasing use of electronic cigarettes amongst youth.Getting hooked young

According to Malaysian Academy of Pharmacy council member Associate Professor Dr Mohamad Haniki Nik Mohamed, the Tobacco and E-Cigarette Survey among Malaysian Adolescents (Tecma) found that nearly one in five (19.1%) of those between the ages of 10 to 19 have used electronic cigarettes.

Of these, almost half tried using them before the age of 14, and almost all the flavoured “juice” used with their electronic cigarettes contained nicotine.

This is despite the fact that nicotine is a controlled item under the Poisons Act 1952, as it is one of the most addictive substances known to man.

Instead of helping people quit smoking, electronic cigarettes are increasingly playing a role in hooking youth onto this life-long lethal habit.

It is therefore pertinent for the government to ensure that it follows regional neighbours such as Singapore and Thailand, in banning electronic cigarettes, and most definitely not allowing nicotine use in electronic cigarettes for fear of creating another generation of individuals addicted to this destructive substance.

The RCP report acknowledges the fact that quitting smoking is not purely a medical issue.

With this in mind, the report also makes recommendations on:

These recommendations are just as applicable in Malaysia.

Ultimately, we should all share the same goal of saving lives and reducing the healthcare and financial burden on the country.

We have done plenty to warn smokers regarding the dangers of smoking.

It is also necessary for sufficient funding to be made available to ensure that those who want to quit have access to appropriate support.

It is only when all these aspects are addressed that we will be able to achieve the government’s commitment of creating a smoke-free Malaysia by 2045.

Click here for more information on how to quit smoking.

Vapers have an increased risk of developing asthma 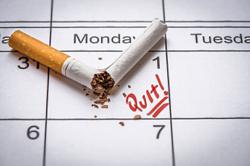