Jenkins (left) and McElroy first starting walking the halls of the hospital they were treated in together as a form of supporting each other, and still meet up occasionally to catch up with each other. — Photos: TNS

The first time Eric McElroy knocked on Zach Jenkins’ door, Jenkins was not in the mood to chat.

At age 25, he had recently been diagnosed with leukaemia.

While he was still absorbing this, he was on the 15th floor of a Northwestern Memorial Hospital building in Chicago, United States, preparing to undergo chemotherapy.

McElroy, then 38, was walking the halls with his wife, Jami.

Seeing them, Jenkins’ girlfriend, Caileen Calvert, asked him to check in and ask Jenkins to get out of his room – perhaps they could walk together.

He did knock on the door, and they did walk together, despite Jenkins’ hesitation.

Eventually, those door knocks became buoys throughout each of their cancer journeys.

At the moment they met, Jenkins was still reeling from his diagnosis, but McElroy was five years into his journey of learning he had leukaemia as a father of three young children.

Over those five years, McElroy had learned a few things.

That depression can come with what is many people’s worst-case scenario.

How to tell children you’ll be hospitalised for a month.

And the importance of moving your body.

“You think you’re alone, and you’re just not,” he said. “What you are is you’re isolated in your room.”

As a fitness coach when he was hospitalised, McElroy made sure to pace the hallways.

He got out of his room as often as he felt able to; he was never in bed before 7pm.

Throughout what often felt like parallel journeys – chemotherapy treatments, check-ups, stem cell transplants – McElroy and Jenkins shared conversations around treatment plans and commiseration around side effects.

One time, they got very sick a week apart, landing again at Northwestern.

“I was literally getting wheeled by him,” McElroy recalled.

“It was just like we were set up to definitely walk the journey together.”

Good news for both 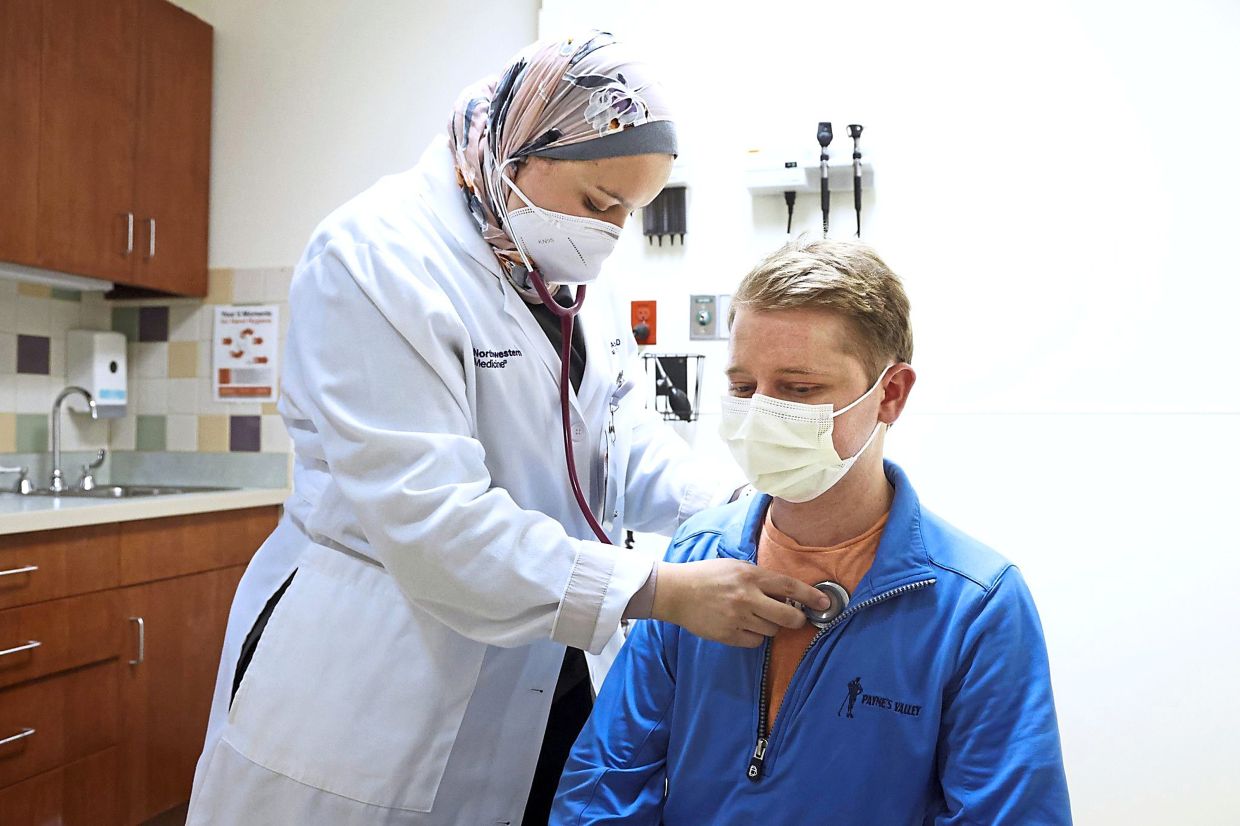 Dr Abaza gave Jenkins the good news that he was officially in remission recently.

In late August (2022), Jenkins returned to Northwestern for a check-up.

Nearly a year after a bone marrow transplant – for which his sister was the donor – he’s been doing well.

He and haematologist-oncologist Dr Yasmin Abaza, whom he hadn’t seen for about a year and since he was much sicker, both shared that they’d been worried since they saw the appointment on their schedules.

She had worried he had gotten worse; he feared she was scheduled to deliver bad news.

Instead, she told him his blood test results looked great and congratulated him on being nearly a year out from the transplant.

He is in remission.

“I’m very, very happy,” said Dr Abaza, who had greeted him with a big hug, calling him “sweetie”.

“That makes me happy,” Jenkins replied.

After the appointment, McElroy met him outside on a sunny Streeterville corner.

He too had received positive blood test results the day prior.

He hopes to be in remission soon.

Start of the journey

Because McElroy lives in Manteno and Jenkins in Bloomington (different towns in the greater Chicago area), they don’t often see each other and they try to meet up around hospital appointments.

Rapport between the two is easy to see, with the pair switching topics from the Cubs and White Sox fandom breakdown within their families to how each of their appointments went last week.

McElroy and his wife had noticed the young man in the hallway, seemingly suffering.

The couple had talked about helping him before Calvert suggested the knock on Jenkins’ door.

In June 2021, after going to get a skin issue checked out, Jenkins answered a call from a doctor who told him to come in right away.

He knew that couldn’t be good, but didn’t think about the word “cancer”.

“I was still trying to process in my head what was going on and what I faced ahead,” he said.

“At that point, I was really scared.”

In contrast, when McElroy, now 40, began his cancer journey in 2016, he’d had an inkling that word might come up.

He had noticed a lump on the side of his torso.

His sister had been treated for leukaemia when she was young; he had a feeling it might be the same diagnosis.

But still, it wasn’t until describing the few symptoms he had – bruising, fatigue, brain fog – to a doctor friend on the phone, who told him he should go in as soon as possible, that he realised the diagnosis might be serious.

At the time, he was walking into his daughter’s preschool graduation.

Six years later, that daughter is 11; she and McElroy’s two sons, nine and 15, know the family motto is “Be cool”.

That’s what Jenkins told his wife and kids when he went into the hospital for 28 days of chemotherapy.

Jenkins wears an orange bracelet on his wrist with the phrase from McElroy’s family.

His mother, Toni Jenkins, who accompanied him to the check-up at Northwestern, says it’s a comfort to have McElroy, with his persistent positivity, around her son, who is more likely to worry with every lab result that things could be going wrong.

Even a mother can only help so much. 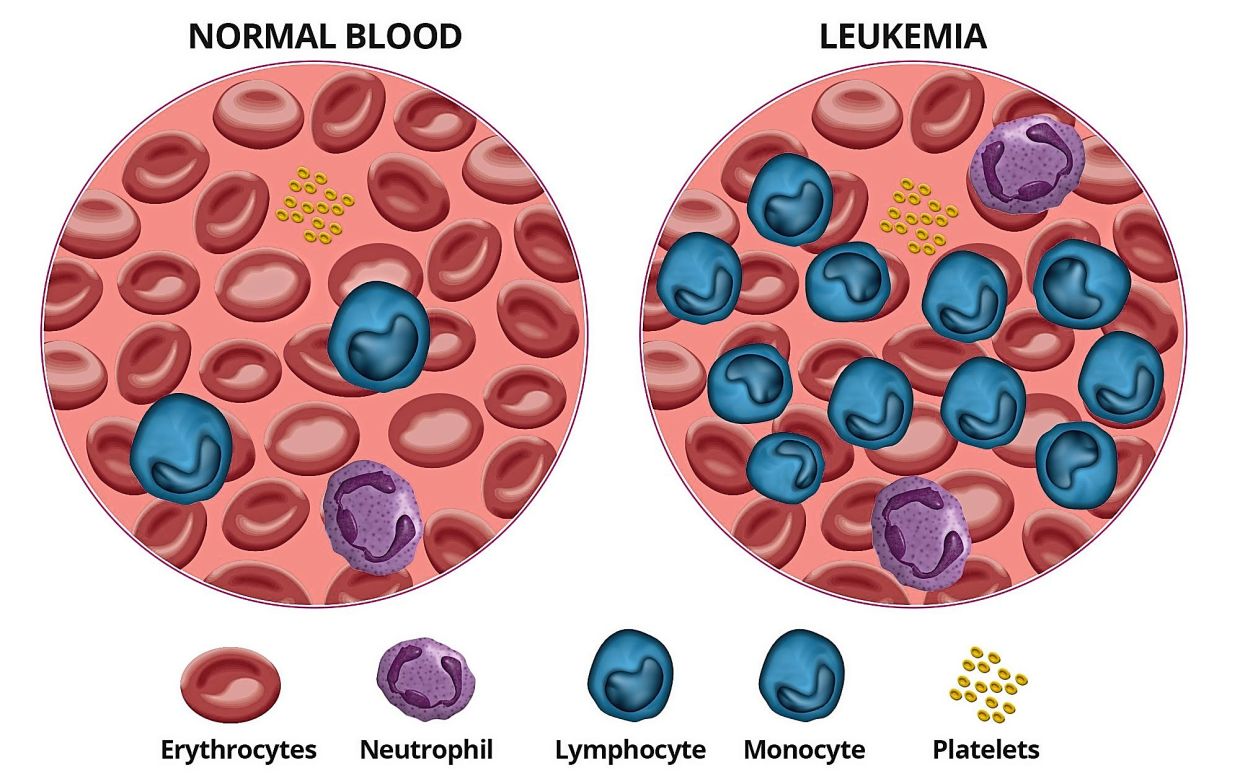 Leukaemia is a cancer of the white blood cells. — Filepic

After that initial meeting on the 15th floor, McElroy started inviting Jenkins to walk the halls.

Nurses and doctors would see them circling the halls at whatever pace was possible.

They’d invite other patients to join what they called a “mobile support group”.

Even after they were discharged, their legacy remains with the clickers nurses added to the walls to help patients track their steps.

As a clinical oncology navigator at Northwestern, helping patients age 15 through 39, she encourages her patients to leave their rooms, to try to meet others who could understand some of what they are going through.

Diagnosed at age 25 herself with Hodgkin’s lymphoma, she knows what it’s like to have your world’s corners darkened right when everyone else’s seems to be launching.

“Isolation is huge,” she said.

Walking has many benefits.

It’s exercise that’s often doable even amid treatment; it can help appetite, circulation, mood and sleep.

A few weeks ago, Jenkins saw someone he had met through a support group.

The man asked, “Are you the clicker guy?”

“The fact that we were able to have that impact was really special,” he said.

McElroy feels strongly about helping others, that God sometimes places people in your path.

And so, when he saw in Jenkins a young man who seemed to be struggling, he wanted to reach out to offer consolation, commiseration, and simply friendship.

Both want other cancer patients to know that even if they don’t feel like it, talking to others going through a similar situation can help.

Every day, McElroy thanks God for what is ahead of him.

It seems like a way to be proactively grateful, to visualise what good may lie ahead.

His family jokes that even when it’s pouring rain, he sees a beautiful day.

Recently, the friends returned to the hallway where they met, and saw the clickers on the walls.

Although it was McElroy who first stopped in a doorway to knock, he said it was Jenkins who pulled him up when things felt dark.

One time, he was staying in his hospital room. Someone knocked.

“When I opened the door and saw him, I just started crying,” McElroy said.

“I could barely contain myself, because OK, now he’s pulling me out of the bed.” – By Alison Bowen/Chicago Tribune/Tribune News Service

Thinking about dying can spur you to live a better life