Milk builds strong bones and teeth and maximises bone gain. It is a good source of protein, calcium, and several minerals and vitamins.

Watching your child grow is one of the many rewarding experiences of parenthood.

Experiencing their development from their first steps and words, to watching them become little persons sparks joy in any parent.

For children to grow, they need the right amount of nutrient and calorie intake to reach their optimal growth and development – too little or too much could be detrimental to their health and well-being.

However, Malaysian children are experiencing both stunting and obesity.

The Malaysian Dietary Guidelines for Children and Adolescents 2013 recommends that children’s daily diet consists of foods based on the Malaysian food pyramid and based on caloric needs.

According to the Malaysian food pyramid, carbohydrates is the body's main source of energy making up 50% of total daily energy intake and promotes healthy bowel movements.

While located at the bottom of the food pyramid, good sources of carbohydrates are essentials such as cereals, wheat, corn, rice, barley, oats and millet. And one should include as much whole grain as he can.

Flipping the pyramid on its head, the top of the pyramid which houses fat, oil, sugar and salt should be taken in small amounts.

Wholefoods such as vegetables and fruits are packed with vitamins and minerals and a good source of fibre.

A good source of protein – the body’s building block – is legumes which provide protein rich in vitamin B, iron, folate and zinc. It is a starchy food that can serve as an excellent source of dietary fibre.

Opt for meat and poultry that are low in fat and cholesterol. Remove the chicken skin before cooking or choose lean meat. Eat fish more frequently and if possible daily.

Milk builds strong bones and teeth and maximises bone gain from an early age and should be consumed every day and at whatever age.

It is also high in protein, calcium, minerals and vitamins such as vitamin A, riboflavin, vitamin B12 and zinc.

In its latest formulation for the young, DUTCH LADY MaxGro is a milk-based formula dietary food for children from age one to nine. It will be launched by the end of the year.

DUTCH LADY MaxGro is specifically formulated to support children meeting 80% of their daily recommended nutrient intake (RNI) for Malaysia 2017, for selected nutrients such as calcium, phosphorus, iron, magnesium, zinc and, vitamin A, D3, E, K1, B1, B2, B3, B6, B12, and C.

Important nutrients are embedded in this formulation such as calcium for strong bones and vitamin D for optimal calcium absorption.

Other nutrients found in this milk formula include iron, magnesium as well as vitamins A, D, E, C and B for healthy growing children.

For more information and to get free samples of the new DUTCH LADY MaxGro, visit here.

What to do when you've been ghosted
Regret getting that tattoo? Here's how you can get rid of it
Work out to the beat of your playlist!
Prevent disease by teaching kids to wash their hands properly
How do moles and birthmarks occur?
I'm a senior citizen with trouble focusing and deciding - is it Alzheimer's?
Should I just catch Omicron? 'Not a good idea', say medical experts Premium
Sitting too long is bad for your joints
When the flu meets Covid-19
Using radiotracers and PET scans to diagnose dementia 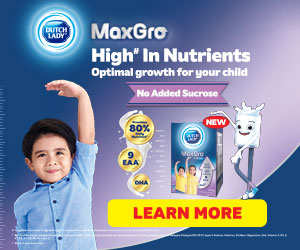