French fries are bad for your waistline in more ways than one, as a new study finds that a diet of junk food negatively affects the hippocampus, which controls appetite. — dpa

Just seeing an overflowing buffet or a beautifully presented meal can make us ravenous.

But when we’re full, a specific part of our brains – the hippocampus – suppresses the desire to eat.

However, if you eat too much junk food such as french fries, pizza and burgers, this neurological appetite regulation seems to stop working, researchers have found.

A diet rich in junk food can affect the hippocampus in as little as a week, Richard Stevenson of Macquarie University in Australia, wrote in the journal Royal Society Open Science.

It’s the latest in a long line of research that finds that eating too much junk food doesn’t only affect your physique, but also your brain.

Studies have linked sugar consumption to memory loss, and unhealthy eating has been linked to aggression, depression and stress, and even shrinkage in certain parts of the brain.

Stevenson’s research found that an unhealthy diet influences the hippocampus to increase the desire for more food, even if you’re already full.

In the study, the researchers recruited 105 young, healthy volunteers who normally ate a balanced diet and divided them into two groups.

One group ate junk food for eight days – foods with lots of sugar and saturated fats.

For breakfast, grilled sandwiches or Belgian waffles and milkshakes were on the menu, and the main meal of the day came from a fast food chain.

The control group continued to eat as they normally would.

On the first and last days of the experiments, subjects in both groups were offered various unhealthy snacks before and after breakfast.

The participants had to indicate how great their desire for the snacks was and how good they tasted after trying them.

The group that had eaten junk food for the whole week showed less self-control than the control group, the researchers found.

Their appetite for unhealthy snacks was much greater, even after they had eaten.

The researchers recommend investigating the role of the hippocampus more closely.

Other research has shown that this area of the brain is sensitive to outside influences such as insomnia, stress, environmental toxins and depression.

Combined with an unhealthy diet, these could cause long-term and increasing damage to the hippocampus.

But conversely, can you improve concentration and memory through your diet?

Researchers believe you can.

Complex carbohydrates, such as those contained in wholegrain products, help satisfy the brain’s energy demand steadily and improve concentration.

Omega-3 fatty acids from fish, nuts and flaxseed oil are said to have a beneficial effect on nerve cells, and proteins from fish, seafood, lean dairy products and legumes are also considered beneficial. – dpa 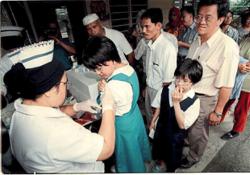