Even a single fall could be fatal for the elderly

Those over 65 years of age are the most at risk of dying as a consequence of a fall. — 123rf.com

Falling is one of the greatest fears for the elderly as their sense of balance and mobility are not what they once were.

In addition, a fall for an older person has far more serious consequences than for a younger person.

According to the World Health Organization (WHO), falls are the second leading cause of accidental or unintentional deaths worldwide.

Each year, an estimated 646,000 individuals die from falls globally, of which 80% are from low/middle income countries.

Adults older than 65 years of age suffer the greatest number of fatal falls.

The 2018 Malaysian National Health and Morbidity Survey (NHMS) reported that 15% of those above 60 had fallen at least once over 12 months. One in two suffered injuries, while one in five were hospitalised.

“When we surveyed our local residents aged over 55 around the Universiti Malaya area, we found a similar number fell at least once a year in their own homes.

“We followed up with 300 patients who had two falls to see if there were multicomponent interventions – we looked at safety at their home, their blood pressure, cardiovascular system, etc.

“What we found was that four out of five of them were taking medications that were potentially contributing to their falls,” says Universiti Malaya Medical Centre (UMMC) consultant geriatrician Professor Dr Tan Maw Pin.

Most falls occur unnoticed; there are rarely any witnesses.

“A lot of times, the patients will say the floor was wet or they shouldn’t have done (whatever they were doing at the time), but sometimes, they don’t remember – that’s usually where medications come in.

“As we get older, we tend to take more medications and we have this thing called drug-drug interaction,” she explains.

A drug interaction is a reaction between two (or more) drugs or between a drug and a food, beverage, herbal supplement or vitamin.

She says, “It can cause a drop in your blood pressure when you stand up or your heart rate might slow down, so momentarily, you might not have enough blood to your brain or the drop (in blood pressure) might cloud your thinking and judgement.

“As you walk around, you’re not aware of dangers and you may fall.

“We used to believe it was the blood pressure drugs, but now we realise there a lot of other more damaging drugs such as psychiatric drugs and anti-depressants.

“Drugs to treat bladder problems, drugs for coughs and colds that you buy from the pharmacy, and certain blood pressure drugs, have this anticoagulant (blood-thinning) effect and make you more confused.”

Even a drug taken 20 years ago can increase your risk of falls. 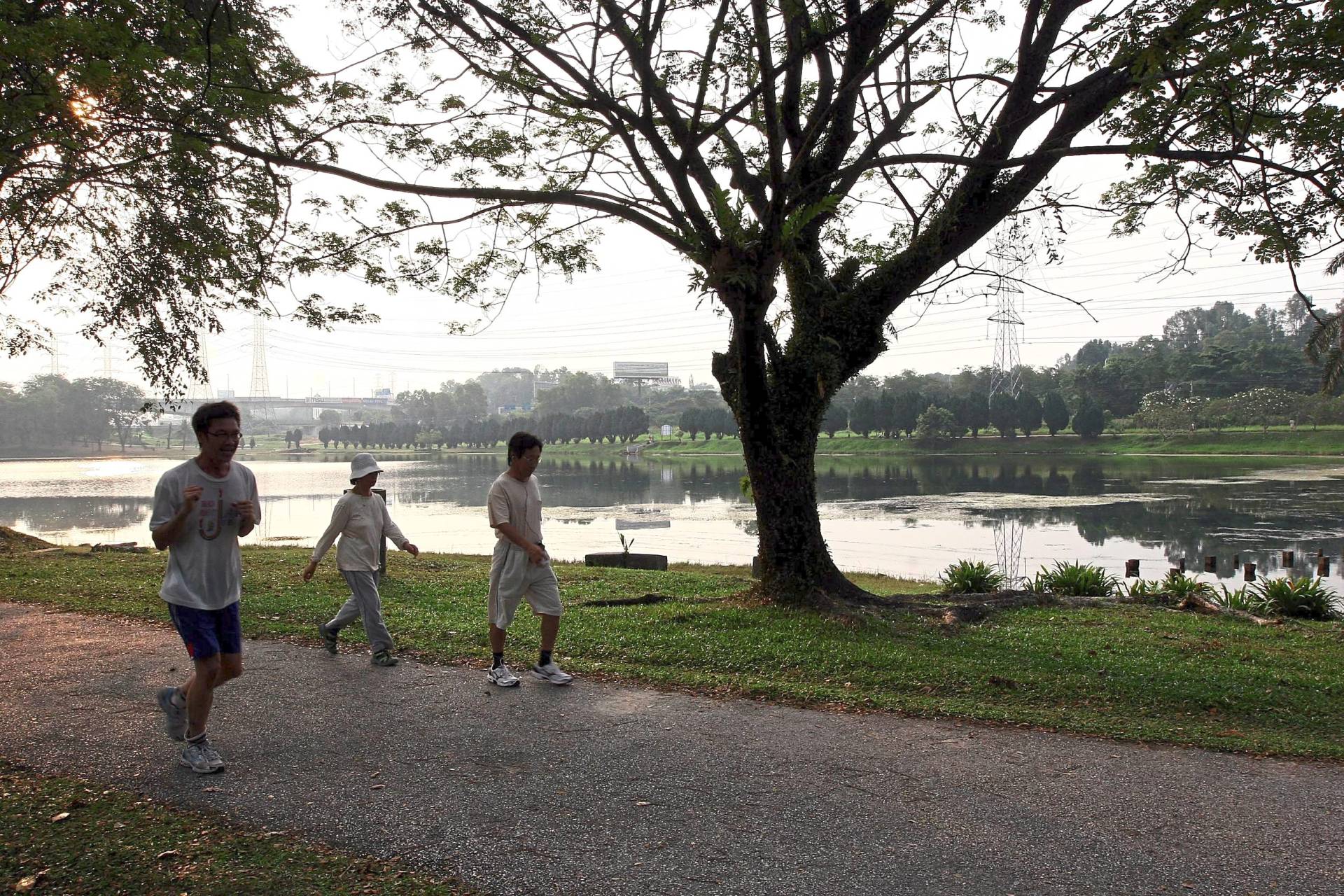 Walking actually increases the risk of falling for older people, as they tend to do so in the early morning when it is dark. ­— Filepic

As our population is getting older, there needs to be a better way of keeping an eye on medications that the elderly take.

Prof Tan notes that doctors should review patients after they have been put on new drugs for a short time, in order to see if they are working well and do not have harmful side effects.

They should also check to see if the new drug is interacting harmfully with any medications the patient is already on.

“All this is not being monitored in our country, which is why we have a higher rate of drug-induced falls compared to Western countries,” she says.

When people fall and go to hospital, doctors tend to look for signs of stroke, but do not check the patient’s medications, their balance, vision and other things that might contribute to them falling.

“We followed up with 100 older patients who presented to the emergency department in UMMC after a fall, six months later to see if they could still do all the things they were able to do before the fall.

“There was an increased level of dependency in performing basic activities such as climbing stairs, eating, dressing and going to the toilet themselves.”

A review ten years later showed that one in five had died within one year of coming to the emergency department.

Sadly, there is no awareness when it comes to this.

“People think they’ve fallen because they are old. And as concerned family members, we tell them not to move because they might fall again, rather than consider that there are potentially reversible risk factors. Family members should bring them to see a falls specialist and check all these risk factors,” advises Prof Tan.

When the elderly fall, the normal assumption is that they will sustain a physical injury, which can include osteoporotic fractures due to thinning bones – commonly at the wrists, spine or hip – or a bleed in the brain (less than 1%).

She says, “The biggest injury is to the person’s self-confidence. This psychological injury affects not only the older person, but their friends and family. The older person is not allowed to be left alone anymore as the family believe they need to be watched all the time."

“So they will make them go to a care home, which we’re trying to stop. In a care home, they are actually more likely to fall because they have changed from being in a familiar to an unfamiliar environment. “There are also more people around, including residents like themselves, more risks of tripping over things, etc.”

The elderly then lose confidence in their ability to move around, develop a pathological fear of falling and stop moving altogether, causing their muscles to waste away.

That triggers a downward spiral, as their muscle wastage and immobility make them weak and more likely to develop pneumonia or stroke, which shortens their life.

“After one fall, within one year, the fatality is 20%, Nowadays, even some cancers have better statistics,” says Prof Tan. Strength training, as seen in this filepic of seniors doing resistance band exercises, is a crucial, but often neglected, part of ageing well.

Once an older person has fallen and sustained serious injuries, they think it’s the beginning of the end, but this is a misconception.

Seniors who have fallen once can become more afraid of falling and walk with a cautious gait. This fear can reduce their quality of life and their ability to exercise properly.

Reduced physical activity can then lead to a vicious cycle in which the older person’s physical condition deteriorates, increasing the risk of falling even more, and further curtailing their independence and quality of life.

The best way to prevent this is to exercise, eat the right kinds of foods (particularly protein), and keep the brain and body active.

Prof Tan says, “Older people tend not to like protein because they don’t have many teeth, so they cannot chew.

“But we need protein to prevent muscle wastage – healthy food is not only confined to fruits and veggies. Or they eat a lot of bland food with very little caloric value."

“The best quality protein is from soy, nuts, beans, or meats such as chicken and fish. It’s okay to eat red meat once in a while.

“We’re also pushing for social participation, although we don’t really know what the formula is.

“We find that our older people tend to shut themselves in the house. The ones that remain healthy and productive are the ones who are socialising – there’s a sense of self-worth that you cannot measure."

“There’s also a strange phenomenon where adult children actually stop their parents from going out because they think it’s too dangerous for them!”

Mental stimulation is another important aspect as a lot of older people leave the thinking to the youngsters.

“Don’t do that. You’ve got to continue learning new skills, so take classes and mingle with all age groups.

“It will solve a lot of intergenerational issues,” says Prof Tan.

And walking is not the only form of exercise. “Older people tend to go walking, which increases the risk of falls. They like to walk early in the morning when it is dark, so they cannot see.

“The exercise that you really need is resistance training to build strength, which a lot of older people don’t do,” she says.

In Malaysia, once people fall, they seldom fall again. “We assume that (this is because) they don’t move much because they have a good family system and the family takes over all their tasks, but we have no proof statistically.

“We’re going to see if this is the case, which will help us target our interventions accordingly, so that they can carry on with a better quality of life,” she says.

However, she adds that there is already a big amount of research that has been done, but not shared properly with the relevant people.

“After we did all this research, we found there was no platform to share with anyone.

“Usually, geriatric issues are shared with stroke, dementia and other such conferences. But here, the focus is on falls.”

This is the motivating factor behind the upcoming 1st World Congress on Falls and Postural Stability to be held on Dec 4-7, 2019, at the Kuala Lumpur Convention Centre.

Prof Tan, who is the organising chairperson for the conference, says, “It’s not just for doctors, but also for physiotherapists, occupational therapists, builders, biomedical engineers, gerontologists and policymakers,”

The three-day event will feature 14 plenary speakers and over 100 different scientific studies on the topic of falls.