Burying yourself in desert sand has the same effect as a sauna session, helping purge the body of poisonous toxins, say desert tribes.

As the morning sun rises over the golden dunes of Erg Chebbi in the Sahara, men and women dig holes for tourists who want to bury themselves in the sand.

Decades ago, tribal nomads settled here, living a traditional desert existence that has now had to adapt to changing circumstances. The dunes of Merzouga tower over the small community in southeastern Morocco, where the Berber Ait Atta tribe now makes a brisk living from tourism.

The formerly nomadic tribesmen have for years been running hotels and restaurants in Merzouga, a key stop on the Moroccan tourist trail on the edge of a sea of sand dunes. Now, they’re even turning to the sands themselves to attract visitors.

For around 10 minutes, visitors are buried neck-deep in the hot sand for therapy said to cure those who suffer from rheumatism, lumbago, polyarthritis and some skin disorders. The therapy has the same effect as a sauna session, helping purge the body of poisonous toxins, according to those tribesmen such as Abdessalam Sadoq, who now work in wellness tourism. “We offer every type of tourism here, but especially for health,” he says.

A tourist takes a sand bath in the dunes of the Merzouga desert in southeastern Morocco. – AFP

Making a living was not always easy for the descendants of the Ait Atta nomads, and over the decades, the sons and daughters of those who roamed the desert on camels have had to attune themselves to more modern ways.

The Ait Atta once accumulated riches from trans-Saharan commerce, but now, all that remains of this past is a road sign pointing towards Timbuktu, a mere 52 days away by camel. Their way of life ended after Morocco became a French protectorate in 1912, with the development of mining in the region, the emergence of urban centres and demarcation of the nearby border with Algeria.

Once-nomadic tribes had to find a new livelihood, and turned to cultivating date palms and tourism in the second half of the past century.

Visitors in search of a cure do not come only from abroad. Many Moroccans also firmly believe in the power of the desert. “I really feel much better, and each year, I come back here to spend a week,” says sciatica sufferer Ali Kallamouche from the central town of Beni Mellal.

A sand bath at Merzouga costs up to €10 (RM41.30), and when “patients” shake off the sand, they are wrapped in hot towels to avoid the shock of a sudden cooling of the body.

Many come not just for the cure, but also for the breathtaking sunsets over Merzouga’s erg – the shifting sand dunes 20kms long, 5km wide and up to 150m high. Camel safaris and stays in the desert under canvas with the region’s Berber and Arab tribes are still a tourist staple, but with the economy biting, industry workers had to look elsewhere to attract business.

“People come for sand baths... and to taste the local dishes we make using medicinal plants and herbs,” says Sadoq, who also heads an association to promote tourism in the Sahara.

Tourism is a cornerstone of Morocco’s economy – contributing 10% of gross domestic product. According to market experts, it is also growing, thanks to the development of wellness tourism.

In Merzouga, more and more people are signing up for a hot sand soak at the height of summer and other businesses, including those rooted in the recent past, are thriving as a result.

Ali sells camel milk, which he insists does wonders for diabetes, anaemia and digestive tract problems. “People come from all over the world to Merzouga for sand baths, and that helps us promote other products,” he said. – AFP Relaxnews 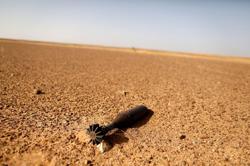