Modern Americans turn to their versions of bomohs – Native American Indians – and an ancient ritual in the face of a persistent drought.

THE woman in line at the bank at San Juan Bautista, California, said she had already sold all her cattle and was now selling her land.

It was one too many tales of drought hardship for Laynee Reyna, also known as She Who Makes Things Happen – a name given to her by a shaman decades ago.

She felt a great spirit seize her. In the crowded bank lobby, the 79-year-old raised her arms.

“Everyone in this town has got to come together and pray and dance for rain, and we’ve got to do it now,” she said.

Teresa Lavagnino, depositing cheques at a teller’s window, rushed over.

“Can you do it? Can you make that happen?” she asked. “I can spread the word.” 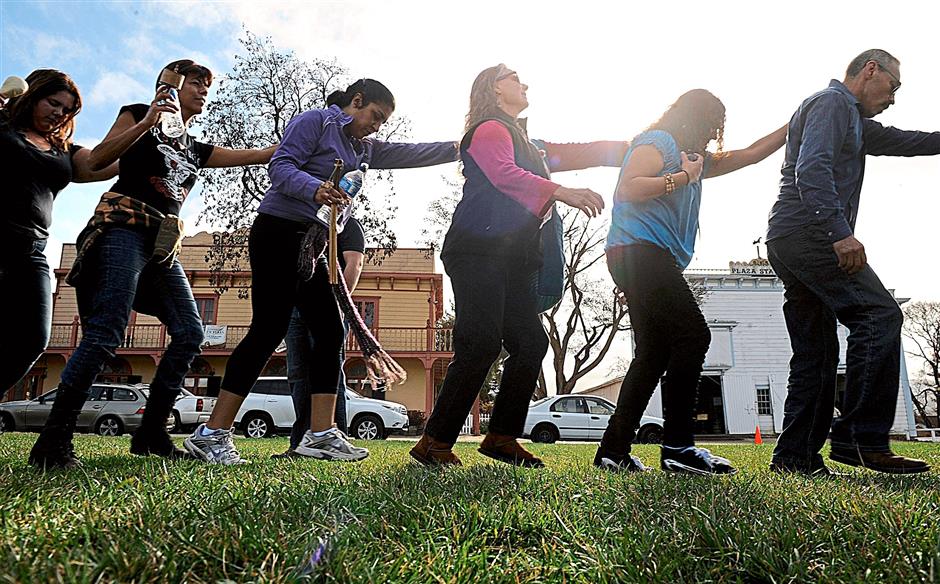 Participants trying to dance up a literal storm. California Native American Indian tribes have held community rain dances and Midwestern tribes report being offered money to help. Even Buddhists have hosted a dance for rain in dry California.

About 75 people, including the mayor and the local priest, formed a circle on the lawn of Old Mission San Bautista – quite a crowd in a city of just 1,900.

“In a small town, when you call a rain dance, word gets around,” said Ray Sanchez, a barbecue chef and construction worker of Apache heritage.

“We know it is our disrespect for Mother Earth that brings this drought. We humble ourselves. We call out for rain,” she prayed.

It didn’t rain that week. Reyna had never expected the heavens to open up immediately. But she wondered if the skies were clear because she hadn’t led a true rain dance. She didn’t know one. But she knew who did.

During the Mission era, California Indians hid in this remote area when they escaped the European priests and soldiers. Even now it’s a hard place to find. Car navigation systems and cell phones don’t work here, at the end of a long dirt road where the Ohlone/Costanoan people settled 4,200 years ago.

As a child, Sayers-Roods followed every deer trail, chased tree frogs and drank out of a year-round waterfall that never ran dry until this year.

Officially, the drought is in its third year. But Sayers-Roods said she’s been watching signs that something was wrong for more than a decade.

“The tree frogs disappeared, then the monarch butterflies,” she said, pausing to pick a sprig of wild miner’s lettuce (named for the men it saved from scurvy during the Californian Gold Rush of the mid-19th century). She pointed to its pink stripes of dehydration.

Her mother, Ann-Marie Sayers, battled the American federal government to claim her great-grandfather’s land. Ten years ago, she led a yearlong project to record the stories of female Ohlone elders, many of whom had been taught to never publicly admit they were Native American Indian. The older women said they remembered little of the culture, but sometimes they could recall parts of songs their grandmothers sang.

Ann-Marie Sayers decided they should sew traditional regalia and dance and chant for the elders. Sayers-Roods put together steps and looked through a collection of words in the tribe’s Mutson language.

“Mum, ‘thunder’ and ‘rain’ are the words calling to me,” she told Ann-Marie Sayers. “I hear a song that just came to me.”

Their group rehearsed. It rained. It was June, past the rainy season.

“It was really interesting,” Ann-Marie Sayers said with a smile and a slight lift of an eyebrow.

Ann-Marie Sayers, who has spent her life trying to reclaim her tribe’s ancient traditions, isn’t offended by the modern-day commotion.

“As to people’s motivations, the answer is ‘E’ for everything,” she said. “But in the moment when the dance begins, when the intent is pure, there is power in collective energy. My mother told me that when ceremony and dancing end, the world ends. I believe that.”

When word of a rain dance in San Juan Bautista started going around, there was an immediate reaction from people who wanted to take part.

She talked to Sonne Reyna, her ex-husband, who goes by the name Chief Sonne and owns a coffee shop in town.

The two were once hippies and both are still in the habit of flashing peace signs. Later, they were involved in the American Indian Movement, the group that led an armed standoff with federal agents at Wounded Knee, South Dakota, in 1973. Then they became interfaith ministers and held conferences in the giant tepee in their backyard.

They were married for 20 years. They marked their divorce on a hilltop, invited all their friends and considered it a sacred sign of approval when an eagle flew overhead. Now Chief Sonne lives in a trailer out by the tepee.

He loved the rain dance plan.

“Magic has never left this place,” he told the morning coffee crowd. “We’re the ones who forgot. We should be aware and celebrate the magic of nature all the time. Use the power you were born with to dance and pray.”

Reyna was certain the prayers of the group that turned out for the first gathering were sincere, but she still wanted a true rain dance.

When Sayers-Roods, a busy art school graduate, couldn’t make it to town right away to teach Reyna the dance from 2004, Reyna learned the steps and words over a video phone call. That night, there were scattered showers.

The next morning, Feb 2, the group danced in rain, the first measurable precipitation in more than six weeks.

Sanchez wore a long purple raincoat as he beat his drum alongside others. People felt their heartbeats match the pounding drums.

Reyna said she will dance at the mission every Sunday at 9.30am, rain or shine, until the worst of the drought passes.

On a recent Sunday in March, a crowd gathered for their weekly rain dance in front of the 200-year-old mission, which had been built to convert the heathens.

“Destiny is a strange cat. History always has a sense of humour,” Sonne Reyna said.

“We dance here because there’s a lawn,” Laynee Reyna said with a shrug.

As Mass let out, Sonne Reyna called out to the parishioners with his big travelling-minister grin. “Come on over, we’re praying for rain!” he shouted. “Join the circle. Take your place. We are all tribal people.”

A few churchgoers joined a group that included women in running clothes, a girl in pink cowboy boots and the tattooed owner of a pool-cleaning company who had brought his Boston terrier, Penney.

Smoke from white sage wafted in coils across the lawn. The air smelled damp from showers the night before.

“We are they who are calling the rain,” Laynee Reyna said from the centre of the circle. “We are true to where we stand – on our Mother Earth.”

Sayers-Roods, a native cloth tied sarong-style over jeans, told everyone to place a hand on the shoulder of the person in front of them.

The circle danced clockwise. And then counter-clockwise to make sure there wasn’t too much rain and landslides.

Some women of an age who would favour Donna Summer added a disco touch. The children formed their own circle in the middle of the larger one.

Reyna passed out bottles of water. She told people to take a sip and spit it out as they danced. Spit it in the air. Spit it on the ground. “Water attracts water.”

People were laughing. It turned into a spitting water fight. Penney the terrier did her part by licking children’s faces.

“Have fun. It’s OK,” Sayers-Roods told them. “This is a serious matter. But without laughter you cannot be serious.”

In a remarkably clear voice, she sang the song that came to her in the language of her ancestors.