Chong Sheau Ching's first article in 1995 was on female infanticide in China.

STORIES FOR MY MOTHER by CHONG SHEAU CHING

THERE is an old adage that goes a prophet is not welcomed in his own town. And Chong Sheau Ching had a first hand experience of just that.

Her intentions were noble. She was merely bringing to light social issues and ills, to make the country safer for her daughter. But the ugliness that came her way was unwarranted and altogether ghastly.

“I received also a lot of punishing and abusive email from men whenever I wrote about single mums, abused women, domestic violence and gender inequality. Most of them said only bad women like me would badmouth Malaysian men, and I should be sent to jail!” she recounted.

There was even a time, when she wrote about young girls sexually abused by the men in their family, she received threats from a reader who wanted to report her “to the Ministry of Information and filed police reports as he believed that such things did not exist in Malaysia.”

Those were her maiden years as a columnist for Star2. But she didn’t allow a few boulders to get in her way. Stories For My Mother, her column, garnered a huge following and it just pushed the founder of eHomemakers (a non-profit enterprise which helps women and men with work life balance) to keep writing.

But of all the articles, Chong had penned over the years, her favourites are those centred around a fictitious chicken village she created called Six Happiness Village. They were satirical social commentaries from male chauvinism to sexual harassment and every week different fowls took centrestage.

One was about a hen called Smooth Feather whose “feathers were plucked” by her employee and was chased away by the villagers when she tried to bring him to justice.

“I have to find another village to live in. And I must never say anything again about my feathers,” she said to herself as the teardrops dried on her cheeks.

Chong shared that the idea to write a series of satire was sparked when she wondered how to highlight controversial issues without ruffling any feathers.

Chong, who wrote her first article (1995) on female infanticide in China as a new mother fearing for her daughter’s life, begot another child in the form of her column. And when the time came to put an end to her column in 2007, Chong likened it to losing a child, a 13-year-old child.

"This column is like another child to me. It started when I first became a mother. Over the years, I have nurtured it the way I nurture Big R, my daughter. Losing it is like losing a precious child – I will miss the impact and implications, the readers’ feedback and their own stories."

Folks! We want to know what you think about us. Leave us a note here :) 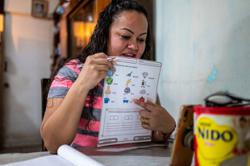