Malaysian twins teach themselves to play the dhol, breaking stereotypes along the way

Two years ago, twins Rebecca and Rachel Joe knew nothing about playing the dhol. Today, they have over ten thousand followers on their Instagram account, with invitations to play the dhol at functions locally and overseas.

It all began when their older sister, Evelyn Rose, was planning her wedding about two years or so ago. The duo decided to surprise her with a professional dhol performance at the ceremony.

They went online in search of a dholi (a person who plays the dhol) to hire but decided, instead, to learn the instrument themselves in time for her big day.

It seemed like a crazy idea, as they hadn’t had any formal music lessons prior.

But, led by Rebecca, who is the more impulsive of the two, they ordered a pair of dhols online and looked for tutorials on YouTube.

“The first day we got our dhols, we were so excited and started playing it like small kids. But we realised it wasn’t easy at all,” says Rebecca.

They weren’t about to give up though and so began their daily practice sessions, which often lasted many hours. 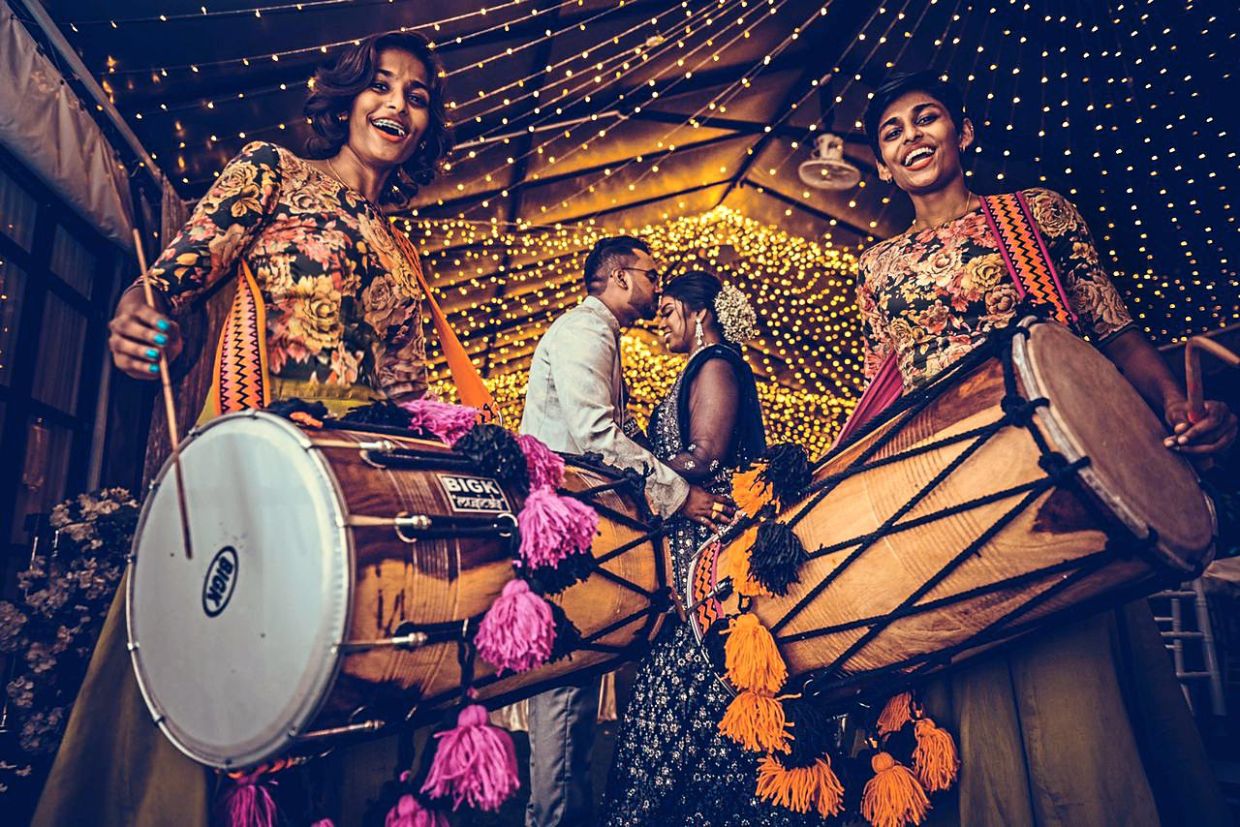 The twins love being a part of their client's special occassions and go the extra mile at livening up the events. Photos: REBECCA and RACHEL Joe

“In the beginning, we were really bad. It took us about three to four months in order to play a particular beat,” says Rebecca, the older twin.

“We owe all our knowledge to Manvir Hothi (who uploads dhol tutorials on YouTube). Without his videos, we wouldn’t be playing at events today,’’ says Rachel.

Their persistence paid off: Their performance at their big sister’s wedding went well and landed them bookings to perform at other weddings and events.

They certainly never expected it to be a turning point in their lives.

At the time, the twins made a living as photographers and Rebecca worked a nine-to-five job too. So, they’d accept bookings to play the dhol at functions as much as they could afford the time.

Pretty soon, though, they were getting more bookings than they could have anticipated and the duo decided to focus on their newfound passion and become full-time dholis (and part-time photographers).

“I had a full-time job but it became too much for me, so I decided to quit and focus solely on playing the dhol with Rachel,” says Rebecca.

Due to their passion for the instrument and determination to excel in everything they do, they’ve gotten better at playing the instrument.

“We are far from perfect, but we are still learning,” says Rachel. Rebecca carrying Rachel in one of the many light moments the twins share in the course of their performances.

They upload videos of their performances on their Instagram page (@rsquare78), and the response from fans has been positive.

“Rebecca and Rachel. They are such swag queens when they are with their bombastic dhols,” reads a comment on their page.

“This (sic) girls are on fire,” read another.

“Without our fans, we would not be where we are today,” says Rachel.

“They are our katadi ... you know, that’s fan in Tamil,” says Rebecca. “Just like how a kite flies higher if there’s a strong wind, our katadi makes us fly higher,” she says.

But they are fully aware that performing the dhol may not be something they can do permanently as such performances are seasonal (for weddings, functions, etc).

“This won’t be a permanent thing but the happiness we get out of this now is definitely permanent,” say the twins.

Mastering the dhol requires discipline and since the duo are learning the instrument on their own, it takes long hours of practice.

“We are the alarm clocks in our home. Our practice sessions usually wake our parents up in the mornings but they’ve never complained,” the twins say, laughing.

Although they live in an apartment complex with many people in close proximity, they’ve never had complaints from their neighbours, for which they are very grateful.

“We have the best neighbours,” says Rebecca.

“The dhol is a very loud instrument and so we try not to start our practice too early or too late,” she added. The twins live with their parents in Cheras, Kuala Lumpur.Despite having to endure being woken up by the beat of the dhol, their parents, Joseph Lazarus and Priscilla Saroja Devi, have been very supportive of the twins’ passion pursuit. 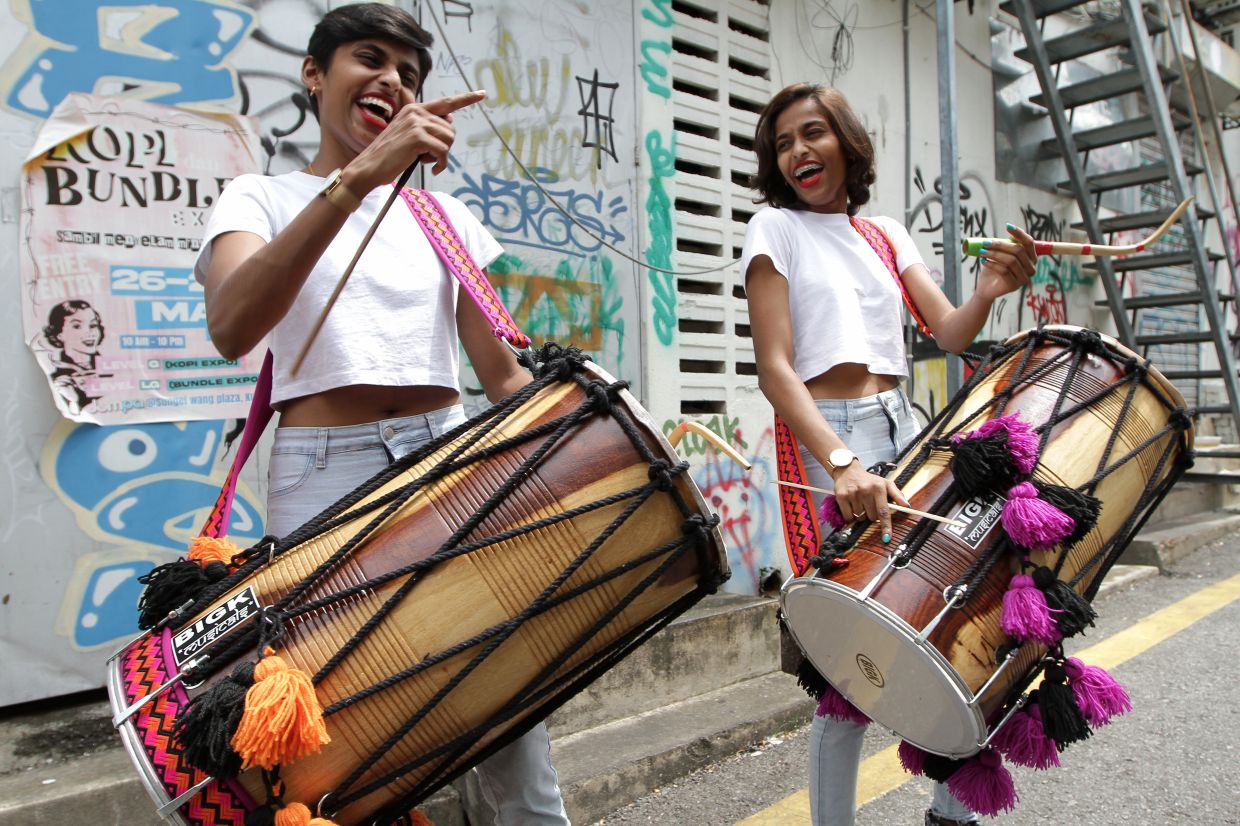 The pair say that they practice smiling during their performances - 'it's not easy' - because it helps engage people and get them to enjoy the music..

“Our parents never once complained when we practised.

“They also follow us to all of our performances till today and help us carry our dhols,” Rachel says.

“Our mother is our number one supporter,” Rebecca says, adding that though their parents were strict when they were growing up, they never stopped them from pursuing their own interests or passions.

Priscilla has also made an appearance or two in their videos on Instagram, gamely dancing along to tunes with her girls.

It’s clear from whom the two get their exuberant nature from.

“Let’s give a shoutout to Priscilla Saroja Devi,” the girls yell. “And Joseph Lazarus too!”

What they love most about playing the dhol is how their music can put a smile on the faces of their audiences and how it can inject fun into the events they play at.

They recall one of their best experiences to date – a mehndi night (a celebration leading up to the wedding ceremony in Hindu and Sikh culture).

“Everyone did not stop dancing. We performed until three in the morning and most of the crowd stayed on and danced on. And we had so many people come up and talk to us. It was one of the best nights we’ve had,” says Rebecca.

It isn’t just the music that draws people in, though: It’s their broad smiles that never seem to leave their faces.

“We smile a lot. When we rehearse, we actually practise smiling as we play, which isn’t so easy. But, when people see our smiles, hear the music and feel the beats, they feel happy,” says Rebecca, flashing her toothy smile.

The two also love that their job lets them be a part of a family’s most meaningful events.

“Many of the families that hire us treat us like family and we too treat them like family. We often stay longer than is required because we want to help make their event vibe,” says Rebecca.

“We love seeing the smiles on people’s faces when we perform. Which is why we make it a point to smile as we play. It’s not easy but it gets people in the mood,” says Rachel.

The pair are identical twins and until recently, they sported the same hairstyle and dressed identically too.

Rebecca admits that she loves looking exactly like her sister.

She says she became quite emotional when her twin wanted to change her style a little – grow out her hair, get a nose piercing and wear braces.

“I was so worried that my twin and I wouldn’t look the same anymore. But I do not want to get braces because I’m too afraid,” says Rebecca.

After the initial disappointment, though, Rebecca supported her twin because “I want her to do what she wants for herself. I want my twin to be happy, and that is enough to make me happy,” says Rebecca.

Though they look and sound alike (both also talk a mile a minute, with hardly any pauses), their personalities are quite different. Rebecca is more spontaneous and Rachel is more of a planner.“I have an Excel sheet for planning. Even when it comes to catching up with my closest friends, I need to plan weeks ahead,” Rachel says.

“For me, it’s the opposite. I can spontaneously go on a day trip far away without thinking twice. I love it,” says Rebecca.

Though they’ve been close all their lives, playing the dhol has brought them closer than ever.Working out is a must

Practice is not the only thing the twins need to do as dholis – they also need to work out.

A typical dhol, explains Rachel, can weigh about 5kg and theirs is slightly heavier as it has an inbuilt microphone inside. For the pint-sized duo, it’s a heavy load.

“It’s heavy and that’s why we don’t stand up and play it on our shoulders throughout our performances.

“It all depends on what our clients want but we often make an entrance with the dhol ahead of the bride and groom and after the procession of the couple, we sit down and play,” says Rachel.

“People do ask us how we manage to carry the dhol and play for a long period of time,” says Rachel.

“I am a fitness freak,” admits Rebecca. “I’ve always loved working out and it has helped me with my physical strength when playing the Dhol too.”

Rebecca and Rachel work out with their fitness coach, Sharockfit, who guides them with tips on eating well and building strength and stamina which they say has helped them tremendously.

Though Rachel wasn’t initially into fitness as much as her twin, Rebecca managed to persuade her to join her in her workouts. And now she’s hooked too.

The size and weight of the instrument is perhaps one reason not many girls pick up the instrument, the twins reckon. But this isn’t an insurmountable challenge, they say.Their advice to women and girls who want to learn the dhol or any other instrument that isn’t “conventionally what girls play”: “Do not wait. Start today, not tomorrow. Music is a beautiful thing,” says Rebecca.

“People may judge, but only you know what you love doing the most. There is no time to think about what people will think about you,” Rachel concluded. 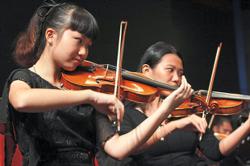 Giving Zimbabwean women a lift
Women lose up to a million dollars because they're not paid the same for equal work
With no where to go, Ukraine's elderly bikers defy cycle of violence
Starchild: If they had a million ringgit, Malaysian kids say they'd donate to charity
Living in grief since Beirut explosion that killed their young daughter
In Haiti, children who fled gang wars have to face uncertain futures.
What Malaysia and Malaysians must do to check human trafficking
Conjoined twins separated with help of virtual reality in Brazil
Bill Russell, NBA's first Black superstar and civil rights activist, dies at 88
Starchild: Malaysian kids have a passion for kite flying