By day, Le Yen Quyen works as a pharmacist at her local health clinic in Vietnam's Mekong Delta. At night, she dances under the head of a lion on perilously high metal poles, practising her moves ahead of Lunar New Year festivities.

Quyen, 27, was one of the first women to join the Tu Anh Duong lion and dragon dance troupe, where performers mimic the movements of the creatures to bring good luck and dispel evil spirits.

Evening after evening in the southern city of Can Tho, she perfects the stunts she will show off during Tet, the Vietnamese New Year holiday which begins next week.

Her baby daughter, who accompanies her to every session, looks on from the sidelines.

"To get good at lion dancing you have to be patient... take risks," Quyen, whose husband is also a dancer in the troupe, told AFP.

"It was very difficult at the beginning. I injured my hands and feet."

Central to the routine are 21 metal plinths, some standing at more than two metres, which dancers must jump between to symbolise the challenging stages in life that must be overcome.

Towering over them all is a seven-metre pole - the ultimate spot to showcase the complex twists and turns of the lion dance.

As a Taekwondo black belt, Quyen already had the agility and power to excel at the dance, which has been performed for centuries - largely by men - in Vietnam and other parts of Asia.

But to join, she had to overcome resistance from the local community, who said it was too challenging for a woman.

It was her talent that eventually convinced them, said Quyen, who has won dozens of gold medals at local and national lion and dragon dance competitions.

"I am proud to be the person who has inspired other girls," she said, explaining that there are now 20 women in the troupe.

One of those is Luu Thi Kim Thuong, 17, who signed up with four of her friends, despite a fear of heights.

"When I trained at the beginning, I was scared... and I couldn't climb to the very top. But gradually, I climbed higher and higher day by day," Thuong said.

"It took me three months to climb the high poles."

Training for two to three hours after school each day, she said she has built great chemistry with her fellow dancers.

That is crucial for such a demanding sport, she added.

"We have to communicate, to understand each other. If something is wrong, one of us has to say it out loud so we can fix it together." - AFP Relaxnews 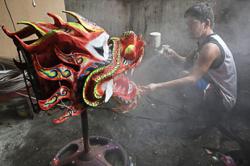