Although they can’t move about as freely as before, the seniors still cherish the chance to meet every week. Photos: THE STAR/Izzrafiq Alias

She had her mask firmly on but Faridah Omar, 75, wasn’t going to stay put in the social distancing squares that were marked by yellow tape.

Faridah wanted to sing and dance and that’s exactly what she was determined to do – albeit wearing the protective mask and standing in a far corner away from the crowd.

“It’s good to be back, ” says Faridah, referring to the weekly singalong sessions with pianist Yang I-Deun every Saturday and Sunday evenings at the Atria Shopping Gallery in Petaling Jaya.

Over the past year or so, a group of seniors - who met as strangers but soon became friends - have been spending their evenings on most weekends singing evergreen hits and show tunes at the mall.

Some dance, some put on show (they’ve even showed up with a feather boa and other paraphernalia as props) while others are happy to just sit back, sing, clap and watch the entertainment provided by their peers.

Often, mall visitors stop to watch and sometimes join in for a song or two - it’s hard to not be drawn by the infectious energy of the group.

Most of all, for an hour or two each weekend, everyone has a ball, including 97-year-old Ong Shu Fong, a retired primary school teacher who can no longer sing or dance but claps gleefully at the antics of the group.

Because of the pandemic, the sessions were put on hold for about four months and like everyone else, the group of seniors found themselves shut off from friends and routines.

Although the seniors kept themselves occupied at home, it was evident that they were happy to be back.

“We kept in touch on our WhatsApp chat group, exchanging videos and messages.

“And, on I-Deun’s birthday, we even recorded a song - each of us singing a line or two - and sent it to him. It wasn’t professionally done but it was fun for us and I think he appreciated it, ” says Winnie Ting, one of the younger members of the group.

It’s been a month since I-Deun has returned to the mall and with him, many of the faithful singers.

“Not everybody has come back because of the anxiety about the pandemic, I suppose. Also, the restrictions on moving and singing - we are told not to sing loudly or take off our masks - may be keeping some away.

“But there are about 30 of us or so who still come, ” says Datuk Dr Khairuddin Yusof, one of the regulars. For Faridah, a retired secretary who has “worked for three IGPs at Bukit Aman in my career”, being away from the group was a challenge as “the weekly sessions keep me going”.

“Singing and dancing makes me feel alive. My mother passed away just last week. She was 95 and always told me to do what I like and that is why I come here, ” says the retiree, inching her way to a spot in the corner where she can dance.

The group sings mostly oldies – in English, Chinese and Malay – and sometimes themes from popular movies and TV shows (such as the theme from 1980s comedy Mind Your Language). I-Deun often starts each song with a short introduction before inviting the group to sing along.

“I think part of the reason we enjoy these sessions is because the pianist is very engaging. Not all mall pianists make the effort to engage with the crowd but Mr Yang is really good, ” says retiree Anthony Ang who was content to stand back and enjoy the music... until it was time for his favourite tune at which point he launched into song, much to the delight of his peers. They met as strangers but are now friends who share a passion for singing (and dancing).

Patrick Tan, 71, says that he was drawn to the group when he was visitng the mall about a year ago because of their rip-roaring energy.

“I was a bystander at first but soon I got roped in when the group realised that I too enjoy singing. And now, I’m a regular.

“It’s a fun gathering that’s made even livelier by the pianist who is very friendly and accommodating, ” says Patrick Tan, 71.

Realising the risk of the pandemic, particularly to their age group, the seniors make sure to keep their masks on throughout the evening and if they don’t, I-Deun reminds them to remain masked at intervals throughout the one-hour long sessions.

Even though it makes singing terribly uncomfortable and their voices muffled, their enthusiasm isn’t hampered.

Bouncing in his seat is Yong Chin Tong, who admits finding it hard to “duduk diam diam”.

While he was content to move in place for most of the evening, he couldn’t hold himself back when the pianist played his favourite tune: Ayo Mama (Peraju Laju).

“I come here for my therapy. I enjoy singing, I enjoy dancing and I enjoy life. That’s about it. Some people say I am making a fool of myself but it doesn’t matter. As long as everyone smiles, that is meaningful to me, ” says Yong, 60, a father of three.

Though mindful about the risks during the pandemic, Dr Khairuddin extols the benefits of the activity. Singing helped him improve his speech and memory following a stroke a few years ago.

“It really is good activity for our brain and I really recommend it for everyone, ” says the retired professor of obstetrics and gynaecology who comes to the sessions with his wife, Datin Khairiah.

Singing away the blues 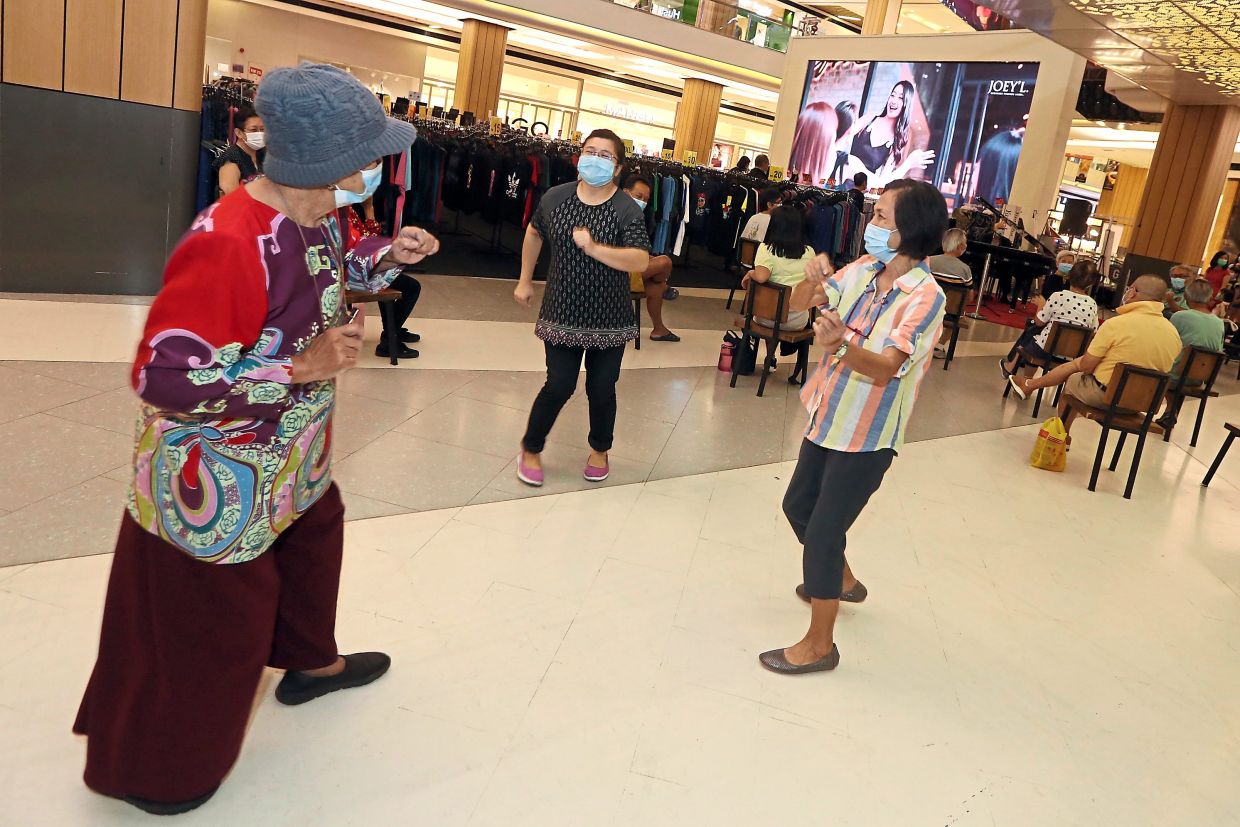 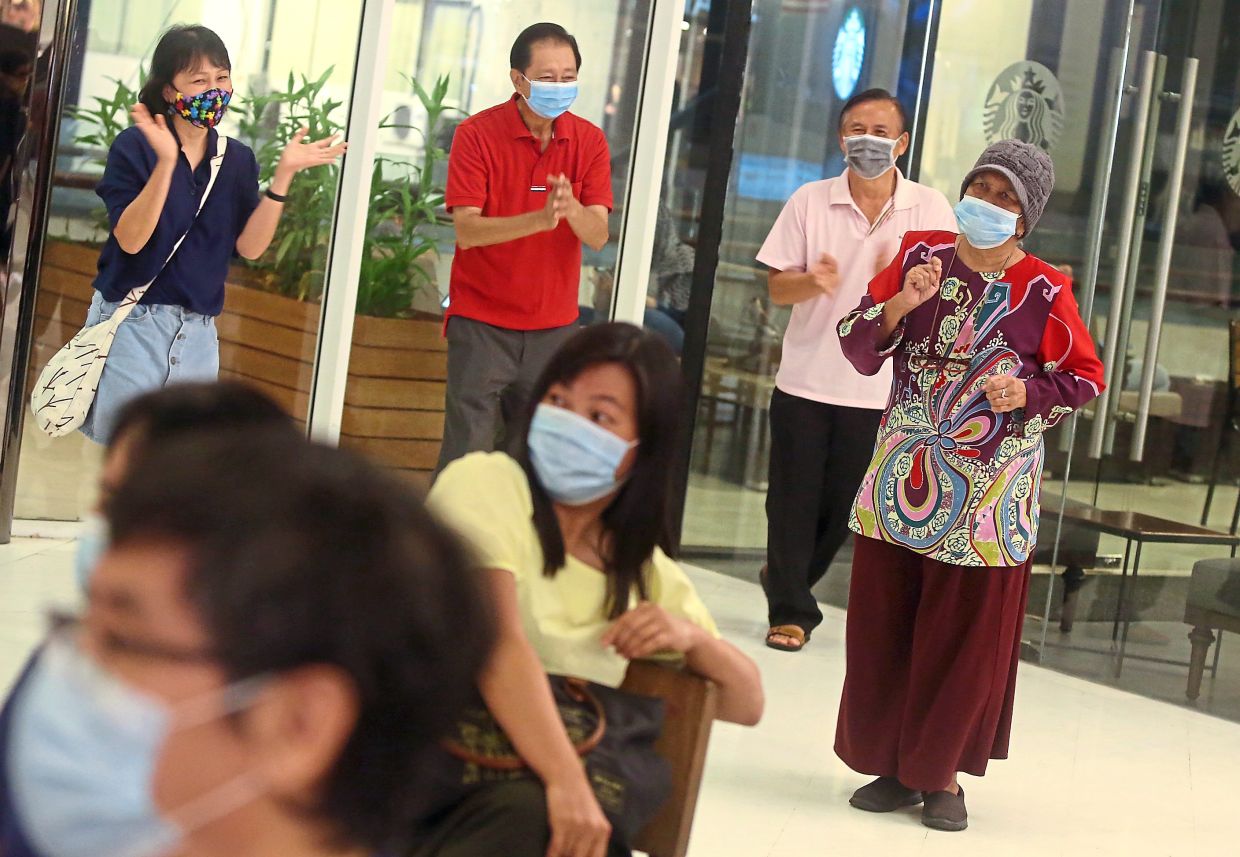 Although they can’t move about as freely as before, the seniors still cherish the chance to meet every week. Photos: THE STAR/Izzrafiq Alias

A group of seniors resume their weekly singing sessions at a shopping mall during the recovery MCO. Photo: THE STAR/Izzrafiq Alias

The singalong sessions are rejuvenating for many seniors, including this 93-year-old. Photo: The Star/Izzrafiq Alias

The group of seniors are happy to be back to their activities during the recovery MCO. Photo: The Star/Izzrafiq Alias

They met as strangers but are now friends who share a passion for singing (and dancing). Photo: The Star/Izzrafiq Alias

Faridah makes sure to keep her mask on as she boogies to her favourite songs. Photo: The Star/Izzrafiq Alias