After more than two months away from school, how are children coping?

Adjusting to the new normal is not easy for most children, but it can be a time where new or hidden talents are discovered. Photo: Filepic

Eleven-year-old Jayden Lee feels increasingly bored and restless at home. It has been more than two months since the movement control order (MCO) began and while many adults have returned to work, Jayden still can’t go to school and the year five primary school student misses his friends.

“I can’t go out to play nor go to school. I miss going to school and playing with my friends,” says Jayden. “I feel bored ... but mummy and daddy say we must all stay at home a bit longer until it's safe. I play with mei (his sister, Jesslyn), and sometimes, mummy and daddy also, but they are always busy. They're working even though they're at home.”

Jayden's mother Melanie Yeoh, 36, says that although she and her architect husband Peter Lee, 36, have come up with “creative ways” to keep their children busy and occupied – playing board games, having indoor camping and picnic sessions, and even creating a special space at home where their two children can learn, play and explore – their son still misses his friends. The new normal can be a time for children to explore and discover what they are good at and interested in. Photo: Filepic

“For Jayden, understanding the new normal – that he has to stay home, learn online, and can’t see his friends except virtually – is one thing, but accepting it is another,” says Yeoh, an Account Manager.

Jayden learns from home using Google Classroom/Meet and he is doing well in e-learning. It's the only time when he gets to interact with the outside world.

“I talk to my teacher and classmates through our classroom chat group and we learn things together,” he says.

But his parents are concerned their son may have problems re-adjusting when he returns to school post-CMCO. They are concerned that he may get used to his "at home" routine and, since he has been spending a lot of time online for studies, they wonder if he'll have a problem going out and interacting with people again.

“There needs to be balance between being online and real-life,” says his father. "We hope that our son will be able to adjust to the new normal easily,” he adds.

Like Jayden, life has changed dramatically for most school children: not only have they been away from school and their peers for two-and-a-half months, they are also discouraged from going to parks or following their parents out to the mall or shops during the CMCO period.

Basically, they are confined to the house, except perhaps for a quick visit to their grandparents' home or some exercise in the neighbourhood park with their parents.

Going through the pandemic and adjusting to the new normal isn't easy, especially for young ones, says psychologist Associate Professor Dr Anasuya Jegathevi Jegathesan, and parents need to be vigilant in making sure their children are coping well.

"Parents have an important role in identifying and managing symptoms of stress in their children. If a child has always been outgoing and is suddenly reluctant to step outside, interact with anyone, is hyper vigilant... their increased sensitivity may signify that things aren't fine, ” she says. “The reverse may also be true. If a child who hasn’t shown much interest in schoolwork is suddenly always hooked onto their laptop, even after their online classes are over, or during odd hours of the day, it's a sign that something's amiss, ” she adds.

Although there isn’t much difference in Jayden’s behaviour now, Lee says he notices that his son is quieter. Children can explore, learn and discover their hidden talents during this time at home. Photo: Filepic

"He's online more, and draws and paints more too. It’s his outlet since he can’t be more active outdoors like before. But he does tell us he's bored ... rather often initially, ” Lee adds.

Parents need to create a safe, happy and healthy environment at home, says Dr Anasuya, who is the heads the psychology programme at Taylors University. To do this, she says, parents first need to manage their own anxiety before managing their children’s.

"It starts with the parents. Being cooped up at home together may make you feel irritable, but never argue with your spouse in front of your children. Also, never make your child take sides in an argument.

"Also, avoid fake news, discussing only fearful topics, and rushing to get coronavirus updates every half hour because this may create a sense of paranoia in your child,” she cautions.

Help with moving on

With social distancing being part of the new normal, there is a risk that children will become afraid of socialising when restrictions are lifted and school reopens.

Although e-learning is a good alternative for children during the pandemic, being online for long periods can lead to stress for some children, says Dr Anasuya.

“During this time, they're online for long periods of time without actual human interaction or engagement with their friends, classmates and teachers. Besides studying, they also engage with the online world in many other ways, and this constant exposure can lead to stress when they eventually have to be weaned off their gadgets.

“E-learning also means children rely on their parents’ involvement for their schoolwork. So, when the CMCO is lifted, they return to school and parents are not around all the time, they may find it difficult to adjust.

There're many issues that arise from social isolation, she says. Even when they return to school, children may hide behind computer screens after school hours and create their own online avatars.

"Doing this for a prolonged period may become habitual even after the CMCO is lifted," she says. There needs to be a balance between being online for studies and doing other activities. Photo: Filepic

The key is balance. Parents need to balance their children’s time online or on gadgets with other activities that they can do together or with their siblings such as cooking, dancing, singing, and others.

Isolated from her world

As an only child, seven-year-old Shakthisri Gunaseelan misses playing with her friends at school. Before the MCO was enforced, she already knew about the "virus from Wuhan, China" as her teachers had spoken about it at school: she understands the need to wash her hands, wear a mask, and stay home in order to "be safe" from the virus.

“Adjusting to the new normal may be difficult but these young ones are actually more resilient and tough than we give them credit for, ” says her mother Prema Jayabalan.

But, the reality of what she had to give to to "just stay home" hit the young one soon enough.

“So far, Shakthisri is coping pretty well. But because she doesn't have any siblings, she misses having others to interact with. She’s also hyperactive so being confined to the home isn’t easy for her. Initially, she did ask why she has to stay home and can't go to school, nor visit her cousins and friends,” says Prema, a corporate communications manager.

Prema and her husband Gunaseelan Kannan, 39, a financial advisor, are working from home under the new normal. Initially, Shakthisri thought that having her parents home means that she could get to play with them all day, but her parents explain that although they are home, they still have work to do. 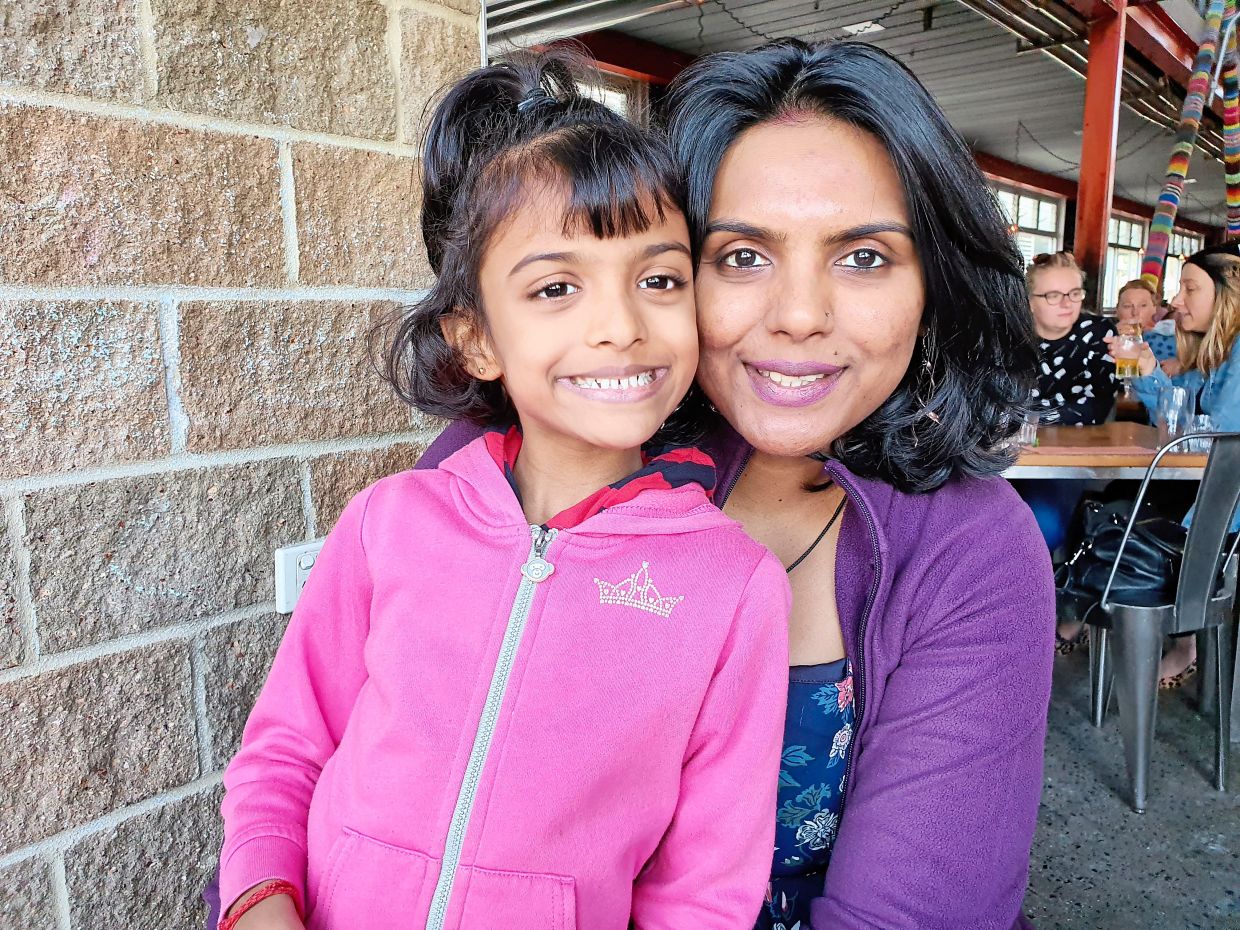 Prema (right) with her daughter Shakthisri, believes that children are more resilient than we give them credit for. Photo: Prema Jayabalan

“We do play with her, but since we're both working from home, she's alone most of the time with her storybooks and jigsaw puzzles. It was confusing for her at first, but she soon adapted," says Prema, adding that they take turns to play with her so that she doesn't get too restless.

Prema says that being part of a parents' support group has helped them gain insight on how to help their young child cope with being away from friends and school.

“Talking to friends and other parents with children who have gone through the same thing helps,” she says.

To prepare their children for school when the restrictions are lifted, parents need to have a heart-to-heart talk with them, suggests Dr Anasuya. Although it is uncertain how much freedom children will have when they're eventually allowed to return to school, they need to remember that while they can be brave and venture out, albeit still maintaining good hygiene (washing/sanitising hands and wearing face masks) and social distancing, says Dr Anasuya.

"Parents may need to retrain their children how to behave and interact with others post-CMCO so that they can come out of their social isolation while keeping to distancing measures," she says.

Although it has been a period of many adjustments, for both children and parents, Prema and her husband say that spending time at home with Shakthisri has been rewarding.

“Because we’ve been spending so much time at home, we've discovered how flexible and ‘bendy’ Shakthisri is and that she's interested in gymnastics,” she says, adding that they plan to send her for gymnastics classes after the pandemic is over. 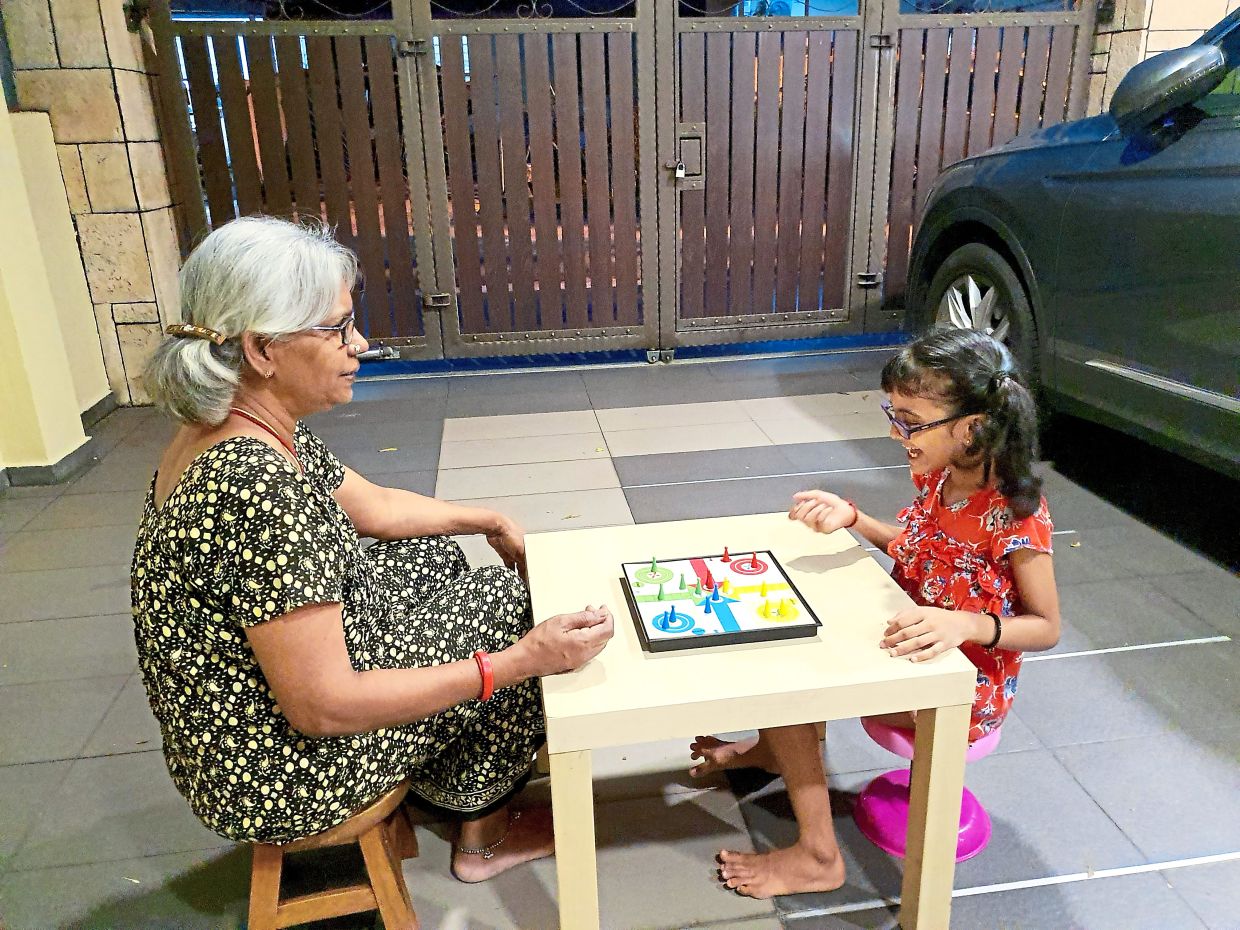 Prema (right) with her daughter Shakthisri, believes that children are more resilient than we give them credit for. Photo: Prema Jayabalan

Shakthi (right), an only child, takes delight in playing board games with her grandmother who lives in the same household. Photo: Prema Jayabalan

Shakthi (second from right) with her parents and grandmother. Photo: Prema Jayabalan

The new normal can be a time for children to explore and discover what they are good at and interested in. Photo: Filepic

Adjusting to the new normal is not easy for most children, but it can be a time where new or hidden talents are discovered. Photo: Filepic

There needs to be a balance between being online for studies and doing other activities. Photo: Filepic

Children can explore, learn and discover their hidden talents during this time at home. Photo: Filepic

What is the new normal and how do we adapt to it?

Emotional Stress: What To Do If Your Family Member is NOT ok?

'Dancing, not war': Signs of normality in Ukraine's shattered Kharkiv
112-year-old Venezuelan is now the world's oldest living man
Waiting for the water train in scorching India
76-year-old Russian artist is proud to be voice of protest on Ukraine
Shot in both eyes and completely blind, but US teen is still skateboarding
'My body my choice': Thousands rally across US for abortion rights
Study: Vegetarian, vegan children not nutritionally deficient
They dress the West, but Sri Lanka’s women workers face crisis upon crisis
The Depp-Heard trial has far-reaching implications for victims of violence
Starchild: Malaysian children share loving wishes on Mothers Day