Pavithra and her husband M.Sugu became a YouTube partner because their cooking videos garnered such a huge following. Photo: Bernama

In January, a husband and wife started sharing their cooking videos on YouTube, not realising that their channel would soon become a hit among Malaysians from various backgrounds and age groups.

Social media users may have come across these cooking videos uploaded by a certain ‘Sugu Pavithra’ that feature a young lady (and sometimes her husband) cooking various dishes while speaking fluent Malay.

The now-famous lady in the video is S. Pavithra, 28, a housewife, who is sometimes assisted by her husband, M.Sugu, 29, an estate worker.

They were surprised that within just a few months of starting the cooking sessions, their channel garnered some 165,000 subscribers. This has made the couple, who live in estate quarters, YouTube sensations and they now receive a monthly income in US dollars.

When met by Bernama at their home, the soft-spoken Pavithra said she began uploading their cooking videos following a suggestion by her good friend who was also a ‘YouTuber’.

"My first dish was grilled tilapia and I spoke Malay throughout the video. In just four days, I managed to get 5,000 subscribers on my channel and then I received an e-mail from YouTube to become their ‘partner’, ” the mother of two said.

Pavithra, who comes from Buntong, Ipoh, says she and her husband never thought so many people would watch their videos, let alone subscribe to their channel.

This, she admits, became her motivation to create more interesting materials.

"I can speak Malay fluently so why shouldn’t I speak it in my videos? If I speak in Tamil, not everyone will understand. By using Malay, many Malaysians can watch and understand.

"The most interesting and motivating part is when many viewers left positive comments and asked us to continue doing this. Some of them also requested Indian recipes, which is really exciting, ” she said.

Pavithra was also thrilled when a number of celebrities not only followed their YouTube channel, but also tried her recipes and uploaded their videos online because they were inspired by ‘Sugu Pavithra'.

Also read: How are Malaysian youth spending their time during the MCO? 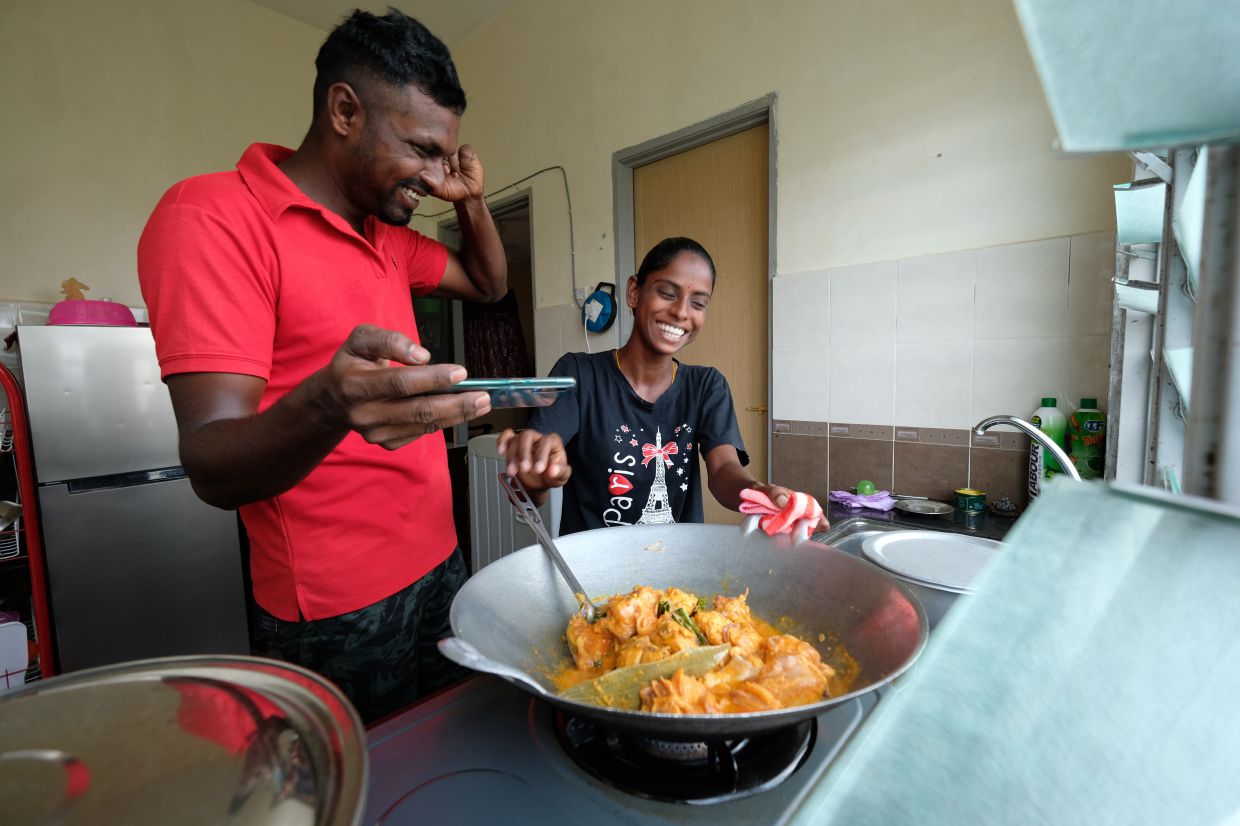 Pavithra and her husband have 165,000 subscribers on their YouTube channel which features their cooking videos. Photo: Bernama

Among them are bodybuilder Sazali Samad and Japanese YouTuber IChang RM who both tried the chicken curry recipe.

Sharing her YouTube journey, the down-to-earth lady says that she and her husband chose to share simple recipes such as stir-fried eggplant with shrimp paste, stir-fried water spinach and kuih ketayap, using the regular items available in most homes so that more people could benefit from them.

She highlights that she has only had one wok, a spatula and two pots including a rice cooker in her kitchen, but that has never stopped her from cooking.

Pavithra also reveals that she does not have a tripod to mount her phone while recording videos, but instead uses a cup which she puts onto a stable surface. Pavithra does not have a tripod to mount the phone while recording videos. Photo: Bernama

When it is her turn to cook, her husband assists in recording the videos, and vice versa.

"But when my husband is cooking, it's me who explains the ingredients and cooking steps because he is shy, ” said Pavithra, adding that she usually edits the videos after the meal and when their children are asleep.

The couple say that they are far from being celebrities. They are still experimenting with recipes and hope their subscribers will try those they have shared on their YouTube channel. – Bernama