'I may not look like it right now, but I have very good intentions, just ... give me your heart.' Photos: Handout

A Young Adult (YA) dark fantasy series that doesn't make you want to jam red-hot steel spikes into your eyes and ears after five minutes – yes, there's something to be said for Half Bad: The Bastard Son & The Devil Himself (henceforth, just TBS), for sure.

And, whoa, it even has the audacity to get you hooked enough on its characters, their easy chemistry and urgent situations to want to keep watching.

Then, still in the relatively early portion of its eight-episode debut season, it absolutely wows (and shocks, a bit, yeah) gorehounds with a visual effect probably not seen – at least, not in such literally eye-popping detail – in genre shows to date.

(I can only think of the ending to an early Brian de Palma film, that will not be named here to avoid possible spoilers, that can rival this shot for sheer similar OMG-ness.) 'The last gang I was in was savagely beaten up by some emo billionaire in a bat-suit, so I think we're doing pretty OK so far.'

TBS is based on the noteworthy YA trilogy by Sally Green that began with the 2014 novel Half Bad, and showrunner Joe Barton (the excellent, offbeat Giri/Haji) seems to have been faithful to the core story while making a few adjustments.

The books told of two factions of witches living in modern-day Europe, the Black (considered evil and mostly distrusted) and White (the general population), living among us mere fains (mortals).

Here, they have been changed to the Blood Witches and the Fairborn (incidentally, the name of a prized weapon in the book) respectively, probably to avoid cancellation hashtags on social media.

Half of the titular combo, the... er, TBS, is Nathan Byrne (Jay Lycurgo, Tim Drake from Titans Season Three), almost 17 and the son of Marcus Byrne, said to be the most savage, powerful and evil Blood Witch of all (possibly the "TDH" in the title, though there are way more deserving types present).

Yeah, all this sounds rather (cough) black and white but there's really a ton of nuance and revelations that will play havoc with your perspective of the characters and factions.

Turning 17 is a critical time for witches, even more so for Nathan because of an odd prophecy that the Fairborn believe in and the Bloods want to prevent at all costs.

When he is recruited for training as a Hunter (as in "witch hunt", geddit), Nathan's life changes in ways he never dreamed of.

Barton and Co. (Andy Serkis is among the executive producers) keep shaking things up so much that we viewers are kept just as off-balance as the poor lad and everyone around him. 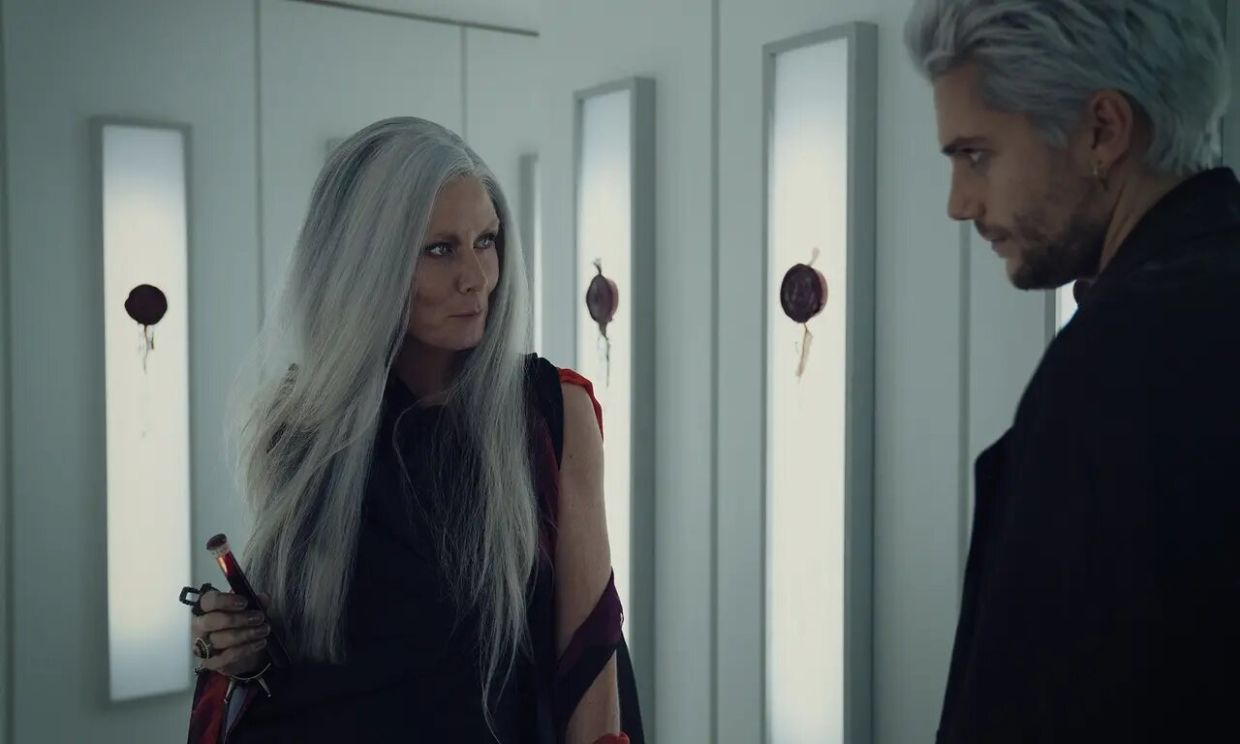 'Did you bring me something nice from your travels? Like ... a dalmatian fur coat?'

Like his destined-to-be-girlfriend Annalise (Nadia Parkes), the daughter of Fairborn leader Soul O'Brien (Paul Ready, The Terror); Nathan's half-sister Jessica (Isobel Jesper Jones), who starts off antagonistic and becomes utterly hateful by, oh, the season's halfway mark; and Gabriel (Emilien Vekemans), a Eurowitch who a friend quite accurately labelled as "sort of a Belgian John Constantine".

One grisly thing about this setting is how witches can steal one another's powers by eating their hearts – and yeah, you'll need a strong stomach to get through a few scenes.

Sometimes, the "road trip" nature of most of this debut season does meander a little, but never so far off that a well-timed burst of violence or humour (and tenderness, rarely but still there) can't pull the show and the viewer back on track.

This is earnestly acted, hard-nosed stuff that keeps things crackling right till the last moments of the season and elevates itself well above the miasma that dogs the YA genre. The spellcasting is coolly "matter-of-fact" and the dramatic moments impactful without being overwrought. Let's finish adapting the trilogy shall we, fellas?

All eight episodes of The Bastard Son & The Devil Himself are available on Netflix.

'House Of The Dragon' review: Everything you hoped a 'Game of Thrones' show would be