A price that usually comes with fame is the constant invasion of privacy.

While it is nice to bask in the spotlight as a celebrity, it can be irritating to have a bunch of cameras shoved in your face everywhere you go.

A few days ago, Hong Kong superstar Aaron Kwok’s family was secretly photographed at a restaurant. As they were leaving, a netizen rushed forward to snap more photos of Kwok and his family.

In one of the photos, the singer-actor can be seen pointing angrily at the camera as he shielded his wife, Moka Fang and two daughters from the photographer.

Kwok spoke about this encounter at a recent TVB event.

"First of all, we were in a private room. We never agreed to take photos. I told them (the photographer) to have some self-respect, but they ignored me and continued to take photos," the 57-year-old said, adding that while the incident infuriated him, there was nothing he could do if people weren't willing to listen.

The Saviour Of The Soul actor seldom posts photos of his family. Even if he does, his daughters would often face away from the camera or have their eyes covered by emojis.

Many netizens supported Kwok and accused the photographer for going too far.

"Celebrities are still humans. If they are hanging out with their family in public, treat them like any normal person," said a netizen. "Respecting others means respecting yourself," another commented. 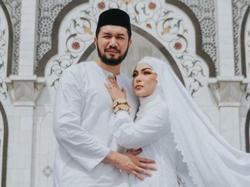