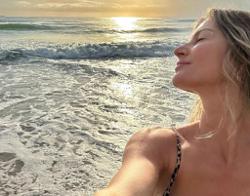 This is one game he couldn’t win. Photo: AFP

Tom Brady’s divorce from Gisele Bundchen wasn’t the Tampa Bay Buccaneers quarterback’s idea, a source close to him told People in a story out Tuesday (Nov 1).

“This was never Tom’s idea,” the insider said of 45-year-old Brady, who the source adds, “didn’t want the divorce and didn’t want the marriage to end. ... He wanted to work this out.”

Brady was even “willing to go to therapy, marriage counselling – whatever it took to make things work” as he “didn’t want the kids to have divorced parents.”

Brady – who according to another source will stay in Tampa, Florida – and the supermodel, 42, who will lives in Miami, finalised their divorce last week and are now both legally single.

In 2015, he reportedly told The Howard Stern Show that Bundchen had said years prior “she didn’t feel I was doing my part for the family.

“She felt like I would play football all season and she would take care of the house and then all the sudden when the season would end, that I’d be like, ‘Great, let me get into all my other business activities. Let me get into my football training.’ ... I had to check myself. Because she was like, ‘I have my goals and dreams too.’”

Those issues didn’t seem to get much better as time went on, with Bündchen telling Elle in September that she “would like him to be more present,” following Brady reversing his decision to retire from football.

The former couple got engaged in and tied the knot – twice – in early 2009. Together they share son Benjamin, 12, and daughter Vivian, nine. – New York Daily News/Tribune News Service