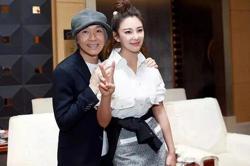 Stephen Chow started his career as an extra in 1980 before going on to become an established comic actor. Photo: CCTV NEWS/Weibo

In the run up to the 25th anniversary celebration of Hong Kong's return to Chinese rule on Friday (July 1), Hong Kong director Stephen Chow has granted a rare interview to China's CCTV.

He told CCTV's Zhu Dan that he has dreamt of becoming an actor since he was a child, as he loved watching movies when he was young.

Chow then turned his hand to directing, helming movies with themes ranging from culinary in The God Of Cookery (1996), sport in Shaolin Soccer (2001) to fantasy in CJ7 (2008).

Zhu noted that there were many Chinese elements in Chow's movies, likely referring to movies such as Forbidden City Cop (1996) and Kung Fu Hustle (2004).

Chow said he included these Chinese elements as he understood them.

"I think this is the biggest advantage of Chinese movies," he said. "There are many wonderful stories to be told due to China's deep culture and history." – The Straits Times/Asia News Network