Patrizia becomes mired in her own darkness and muck, while looking very good. Photos: Handout

What’s in a name? For most, "Gucci" is a signifier of luxury and opulence.

For the characters in Ridley Scott’s sprawling pop epic House Of Gucci, it’s both a blessing and a burden.

For the sizzling black widow at the centre of this unbelievable true story, Patrizia Reggiani, played by a powerfully possessed Lady Gaga, the Gucci name is a golden opportunity that she twists into a blackened curse.

Surrounded by a cavalcade of men with big names, from director Ridley Scott to the legendary Al Pacino, to the ludicrously transformed Jared Leto, to the seemingly ubiquitous Adam Driver, House Of Gucci is Gaga’s movie, make no mistake, and she won’t let you forget it.

Gaga delivers a bravura performance as Patrizia, an alchemical blend of sheer charisma, power of personality, undeniable magnetism, and most importantly, commitment to the bit.

She doesn’t disappear into this role, and there’s never a moment where you forget it’s Lady Gaga you’re watching, but there’s a tremendous enjoyment to be found in watching Gaga lock her jaws around this character and shake this story into submission.

Based on Sara Gay Forden’s book, the screenplay by Becky Johnson and Roberto Bentivegna is a big, soapy true crime tale.

At a hefty two hour, 37-minute runtime, House Of Gucci can sometimes feel rather bloated, bogged down by messy family business dealings, but there are moments, especially courtesy of Gaga and an inspired Leto, that are completely electrifying.

What emerges from the saga of the House Of Gucci is a story about the fury wrought on a fashion dynasty by one hell of a scorned woman, and a fascinating portrait of a female anti-hero.

Gaga’s Patrizia goes on a journey from earthy Italian neorealist goddess to mobster movie thug, her curvy figure once cinched into Gucci suits now hunched into baggy jeans while she stares murderous daggers and gesticulates threateningly with a cigarette or espresso spoon.

With all that attitude, the tiny Gaga could go toe to toe with Brando. 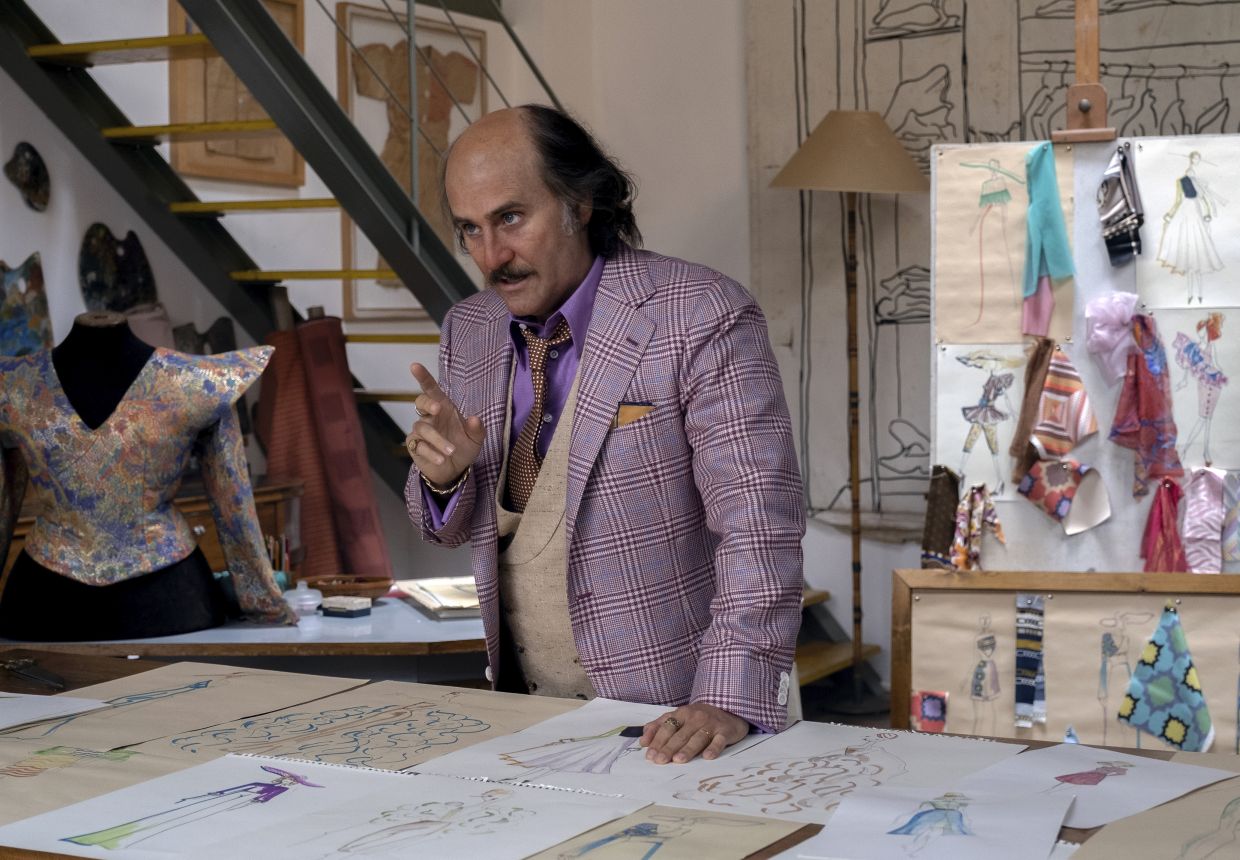 Jared Leto once again goes overboard with his makeup.

She’s a perfect movie monster because we understand Patrizia’s pain. When House Of Gucci isn’t muddling through confounding paperwork, it’s a deeply felt tale about a heady romance and a treacherous betrayal.

When Patrizia meets Maurizio Gucci (Driver) at a party, he’s a dorky, guileless rich kid, a handsome drip who never much cared about the family business.

Patrizia isn’t cultured, and she’s a bit rough around the edges, but she’s charming and enthusiastic, and with determination, she bags her prey.

She pushes Maurizio to become involved in the Gucci business, wins over his family members, including his Uncle Aldo (Pacino) and cousin Paulo (Leto), and then schemes to brutally cut them down.

When Maurizio then discards her for old money Saint Moritz babe Paola (Camille Cottin), it’s a knife in the back, and Patrizia abandons her charm tactics to return to her witchy mafioso roots.

Scott’s approach to colour mirrors the characters’ personal journeys, as the sandy, almost sepia-toned palette through the courtship and newlywed days evokes the nostalgia of an old photograph.

As the Guccis become mired in familial infighting, there’s a stultifying haze of smoke in the air, which eventually starts to clear for Maurizio as he distances himself from Patrizia and the family business.

But Patrizia becomes mired in her own darkness and muck, literally, plotting revenge with her psychic, Pina (Salma Hayek) from a mud bath spa treatment.

House Of Gucci is clearly a companion piece to Scott’s All The Money In The World, another film about a true crime scandal within a wealthy dynasty with a recognisable name.

While Gucci errs on the side of trashy fun (and you almost wish it did more), Money takes a bleaker outlook.

However, both films are tragedies about the influence of money and status on human nature, a trenchant reminder that business and pleasure rarely play nicely together.

Despite all the pain and suffering, these family names endure, and thus, what is a name if not capitalism persevering? – Katie Walsh/Tribune News Service