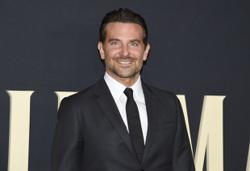 The American star had a near-death experience that sounds straight out of a movie script. Photo: AFP

Bradley Cooper had a near-death experience that sounds straight out of a movie script.

The Academy Award nominated actor and filmmaker revealed he was held at knifepoint in a New York City subway station in 2019.

“I used to walk around New York City all the time with these (headphones) on – this was pre-pandemic – I was on the subway (at) 11:45 to pick up (daughter) Lea downtown at Russian school and I got held up at knifepoint. It was pretty insane,” Cooper recounted the terrifying incident on Dax Shephard’s Armchair Expert podcast.

“I realised I had gotten way, way too comfortable in the city.”

The A Star Is Born director and star said that his guard was down and he was “all the way at the end of the subway” when he felt someone’s presence.

“Innately, I would just go all the way down to the end.”

“I thought, Oh, they want to take a photo or something,” he detailed. “As I turned, I’m up against the post like it’s the French Connection or some s---, and I turned. I looked down and I see a knife.”

The Big Apple transplant, who hails from the suburbs near Philadelphia, shared that he couldn’t “hear anything” because he had headphones but recalled being struck by how “young” the culprit looked.

How did he get out of the compromising situation and live to tell?

“I just started booking, just started running,” the eight-time Oscar nominee shared. “I jumped over the turnstile, hid around the white, tiled entrance to the subway (and) took my phone out.

"He jumped over, running away. I took a photo of him. Then I chased him up the stairs. He started running up Seventh Avenue. I took two more photographs of him.”

Cooper eventually was able to flag down two police officers, who told him to check to make sure he hadn’t been stabbed.

“What happens is people get stabbed and they’re in shock. I looked to see if he was right,” he explained. “And then I got back on the subway and picked up my daughter.”