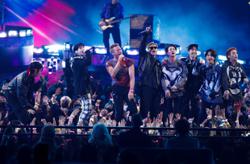 The septet clinched the award during the 2021 AMAs broadcast live from Microsoft Theater in Los Angeles on Sunday at 8pm (US time), beating out five big names – Ariana Grande, Drake, Olivia Rodrigo, Taylor Swift and The Weeknd.

This marks the first time for any Asian act to win the top award at the AMAs, Yonhap news agency reported.

The group has been nominated for the fifth consecutive year in the AMAs since 2018 and has won for four years in a row.

But it has never been nominated in the artiste of the year category before.

Last year, BTS made history when it earned its first Grammy nomination, becoming the first K-pop act to be nominated for the best pop duo or group performance award, considered the most prestigious honour in the music industry, with its single Dynamite.

It ended up failing to win, however.

Nominees for the 64th Grammy Awards will be announced Tuesday (Nov 23), with the awards ceremony set for Jan 31 in Los Angeles.

BTS is scheduled to hold its first in-person concerts in two years in Los Angeles on Saturday (Nov 27) and Sunday (Nov 28) and on Dec 1-2.

On Dec 3, it will perform on the Los Angeles stop of this year's iHeartRadio Jingle Ball Tour, the largest year-end radio show in the US. – Bernama