Jessica Springsteen, the daughter of rock icon Bruce Springsteen and singer-songwriter Patti Scialfa, is one of the four riders on the United States' jumping team in the equestrian event at the Olympic Games.

Twenty-nine-year-old Springsteen is the youngest member of the US team which will compete on Friday (Aug 6).

On Aug 3, Springsteen took part in the individual equestrian event but failed to qualify for the finals after her 12-year-old horse, Don Juan Van De Donkhoeve, toppled a few bars toward the end of a 14-jump course.

She reportedly said this of her first Olympics competition: “Just to be selected to this team with riders that I’ve looked up to throughout my career is a huge honour for me, and it’s great to be here.

"All in all, I’m thrilled with the round and I’m excited for the rest of the week.”

Springsteen was an alternate at the 2012 Games but did not compete there, and she didn’t qualify for the 2016 Olympics team. Springsteen who started riding horses when she was four years old is ranked No 14 in the world.

The Los Angeles Times wrote that the athlete once contributed to one of her father’s songs, joining older brother Evan and younger brother Samuel in providing background vocals on the track Down In The Hole.

Her father is a 20-time Grammy winner with hits such as Born To Run, Born In The U.S.A., Glory Days and Dancing In The Dark. Watch the Olympics in HD with the best SmartTV on the market. Apply Shopee Voucher to save more on your purchases 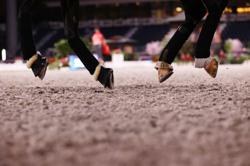