With Olympics in full swing at the moment, it has come to the attention of Malaysian actor Shaheizy Sam that one of the athletes competing at the Games looks a lot like him.

After his fans alerted him about Adkhamjon Ergashev, a weightlifter from Uzbekistan, the 38-year-old actor decided to have a little fun on his social media.

The Zombitopia star uploaded a video of Ergashev in action to his Instagram account with the caption: “I have to keep it a secret @samtilla. I am sorry MALAYSIA. No one must know I have crossed state. MITI never gave me a letter. @adkhamjon_ergashev”

Shaheizy’s wife actress Syatilla Melvin joined in on the joke as well by uploading a photo of the actor and a video of Ergashev at the Olympics.

Her caption reads: “You are dishonest! Yesterday you went out saying you’re going to jaya grocer, bukit jelutong for a short while... Why didn’t you just tell me you had to run over to the stadium????” 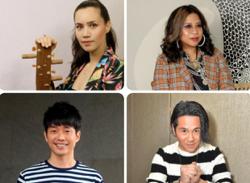